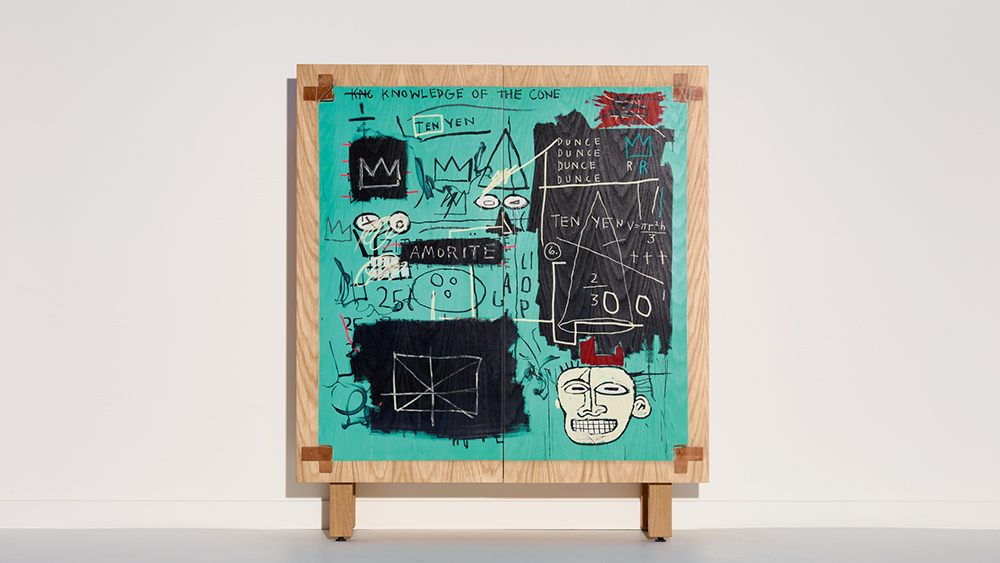 The holidays are coming, and that means that Tiffany & Co.’s holiday advent calendar is back. This year, the jeweler has taken an even more creative approach to the annual release, using its newest calendar to honor one of the most influential artists of the 20th century: Jean-Michel Basquiat.

On Wednesday, the company unveiled its 2021 calendar, which takes the form of an armoire-style, four-foot-tall white oak cabinet. The late New York artist’s 1982 work, Equals Pi, is front and center on the calendar. Basquiat, who died in 1988 at the age of 28, was known for painting on everyday objects such as windows, doors and refrigerators, as well as on cardboard, plywood and other unconventional materials. In a nod to his style, the doors on oak calendar serve as a canvas for a faithful reproduction of the painting.

Equals Pi is named after an array of mathematical equations that appear on the right side of the work, alongside scrawled text, figures and, of course, the artist’s signature crown and skull motifs. According to ARTnews, the painting was made during what is widely considered Basquiat’s most coveted year. Although the work predates this tribute by decades, its robin egg blue background almost seems to presage it. “It is awash in a light blue hue made famous by Tiffany, although there is no evidence that the artist created the work with the brand in mind,” the publication states. Nearly 40 years later, the brand certainly has the artist in mind; Equals Pi not only serves as a façade for the new calendar, it also features prominently in Tiffany’s new “About Love” campaign starring Jay-Z and Beyoncé.

Of course, the contents of the calendar are just as enticing as its art-inspired theme. Inside the painted doors, you’ll find 24 blue boxes sporting numbered hangtags and filled with Tiffany jewelry and other gifts. The specific contents are unknown as of writing, but previous editions of the advent calendar have included items like an 18-karat yellow-gold T True bracelet, a sterling silver paper cup and an 18-karat rose gold Smile pendant.

Beyond celebrating the holidays, this year’s advent calendar will also do some good for the world. Tiffany & Co. will make a $250,000 donation from the sales of the 2021 edition to Free Arts NYC, a nonprofit organization that provides art and mentoring programs to youth from underserved communities. Whether you want to kick off the holidays in style or give back to the community (or, ideally, both), Tiffany & Co.’s 2021 Advent Calendar is now available in limited quantities for $150,000. You can place your order via special advisor or get more info on the jeweler’s website.

If you’d prefer to do your gift shopping in person, you’ll find a selection of Tiffany’s wares at its recently opened pop-up shop in New York City’s West Village. Inside, under the glow of a supersized snow globe, you’ll find a curated assortment of gold and diamond jewelry. And these presents have their own artful wrapping: If you wish, on-site artisans will hand paint or wax seal your gift boxes for a personalized touch.