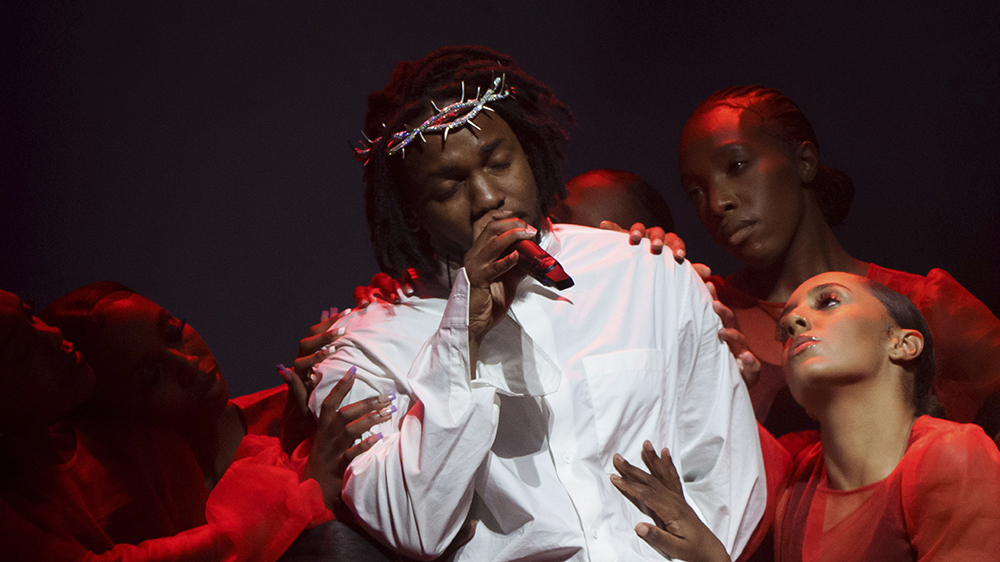 The king of modern-day rap finally has a fitting crown.

Kendrick Lamar closed out Glastonbury Festival last weekend rocking a bespoke bedazzled headpiece handcrafted by none other than Tiffany & Co.

The aptly named Crown of Thorns was commissioned back in 2021 by the “King Kunta” rapper and his longtime creative collaborator Dave Free. The one-of-a-kind titanium design was cast from 14 individual components and features a total of 50 thorns that have been delicately fused into one piece. Four of Tiffany’s skilled artisans in Italy painstakingly added 8,000 diamonds to the crown over the course of 10 months, or 1,300 hours.

The one-off Crown of Thorns was commissioned by Kendrick Lamar and Dave Free.  Tiffany & Co.

Interestingly, the jewelers secured each diamond in place then cut the metal and folded it over the top to create the prongs. This process is typically reserved for high jewelry, but a headpiece for a 14-time Grammy winner is certainly worthy of such attention to detail.

Lamar and Free also selected a cobblestone micro-pavé setting that showcases the diamonds in various sizes. This allowed the jeweler to maximize brilliance throughout the headpiece. All up, the decidedly blingy accessory showcases more than 137 carats and weighs around seven ounces.

Naturally, there’s a deeper meaning, too. The Crown of Thorns is a religious icon synonymous with the pain and suffering of Christ’s crucifixion. Lamar and Free’s contemporary take, however, is meant to be a metaphor for artistic prowess, humility and perseverance. For the 35-year-old rapper, it’s a nod of respect to prolific artists who came before him. It also serves as an homage to Lamar’s influence on rap music and culture, according to Tiffany.

French jewelry designer Jean Schlumberger’s famous Thorns brooch was another source of inspiration for this one-off. The vintage rarity, created in 1947 before the designer joined the American jeweler in 1956, sees 18-karat yellow-gold thorns encircling a 47-carat sapphire.

Of course, Tiffany has handcrafted numerous headpieces since the late 19th century, so this is nothing new for the jeweler. However, Kendrick’s crown represents the latest in a string of innovative partnerships that connect the art world with Tiffany’s designers and artisans.

“Kendrick Lamar represents the artistry, risk-taking creativity and relentless innovation that has also defined Tiffany & Co. for nearly two centuries,” Alexandre Arnault, Tiffany’s executive vice president, product and communication, said in a statement. “We are proud and incredibly excited to work with a visionary like Kendrick in realizing his vision for the crown.”