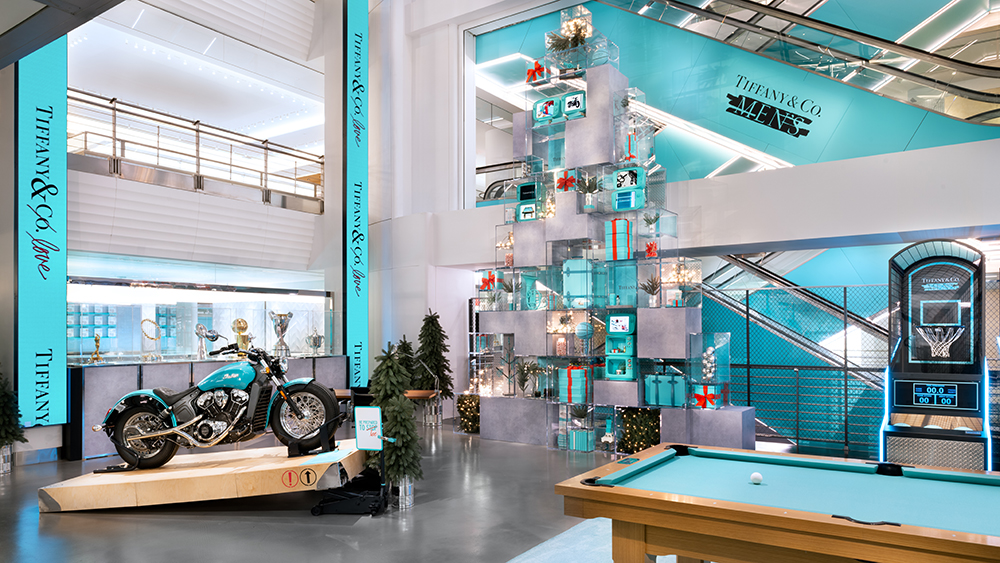 Tiffany & Co. has snagged headlines left, right and center as of late and that trend shows no sign of slowing down. Following its record-breaking purchase by luxury business tycoon Bernard Arnault, the heritage American jewelry brand has launched a men’s pop-up shop in time for the holidays––and it could signal where the brand will head in the future.

Positioned directly next to Tiffany’s iconic Fifth Avenue flagship, the new temporary shop acts as a dedicated space for the company’s recently launched Men’s Collection––the first in its nearly 182-year history. The space will stay open through the beginning of January before transitioning once more into a temporary flagship store while the original landmark structure undergoes an extensive two-year renovation.

The goods available run the gamut from barware to games and, of course, jewelry, but the environment itself is specifically engineered to create a memorable brand experience. For starters, six of the world’s most coveted athletic trophies (the NFL Vince Lombardi Trophy and the NBA Larry O’Brien Championship Trophy to name two) will be on display in one place—it’s rare to see all of these trophies in the same room. In addition to its esteemed jewelry business, Tiffany handcrafts these symbols of victory in its Rhode Island workshop.

Arnault, the chairman and CEO of LVMH, recently visited Tiffany & Co.’s Fifth Avenue location after his acquisition deal was complete. Arnault is known for his fanatical hands-on approach, often taking the time to visit the stores of each rarefied label he owns upon landing in a new city, editing the merchandise as he sees fit. Until Arnault’s purchase, the renovation plans for the Art Deco-style structure were under the direction of Chief Artistic Officer Reed Krakoff who was implementing his own vision of the brand.

In the past, LVMH has had a history of collaborating with noted American architect and interior designer Peter Marino on all of its major projects. Marino is known for his radical, sexed-up take on luxury but, assuming he’s handed the responsibility, it will be his first for an American brand of this type or scale.

The gleaming men’s pop-up is open now until January 6th of next year.