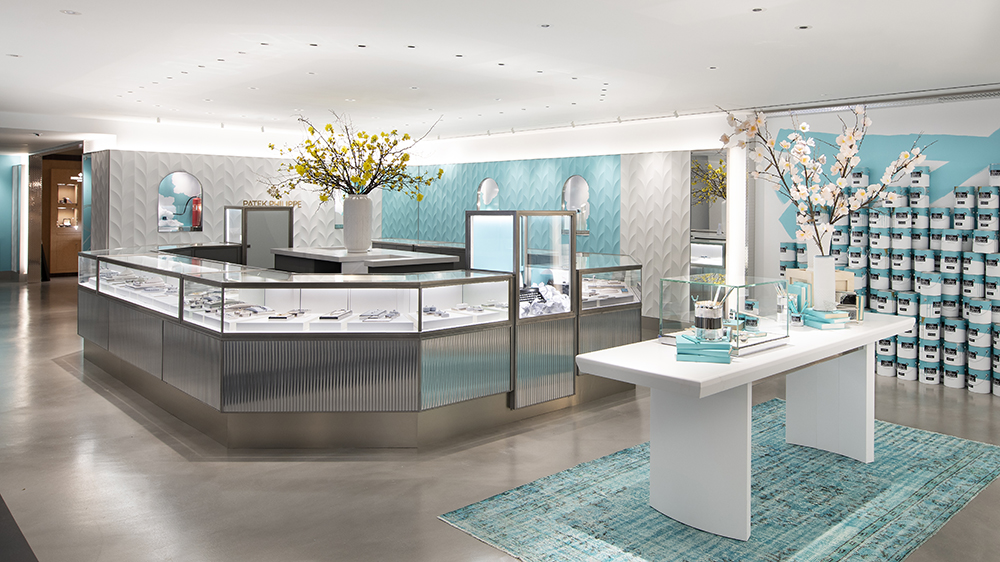 America’s top jeweler has a new address—at least for the moment.

Tiffany & Co., purveyor of those legendary boxes rendered in its namesake shade of blue, has moved next door as its iconic flagship location on Fifth Avenue undergoes extensive renovations set to be completed sometime in the fall of 2021.

Located at 6 East 57th Street between Fifth and Madison, the new temporary flagship is an airy space composed of four retail floors featuring everything from a glistening selection of high jewelry (with equally high price tags) to the recently launched men’s collection to the delicate silver accessories synonymous with the brand. The entire environment is built around a central atrium with stainless steel and nickel accents that floods the levels beneath with natural light thereby accenting its height.

The extensive remodeling of what used to be Niketown began months ago. It first opened under the Tiffany’s banner on a smaller scale as a men’s-specific pop-up in December before evolving once again. Because Tiffany’s was determined to not be without a home base as it swapped addresses, its team accomplished the herculean task of moving most of its inventory from the adjacent building overnight. One could never guess that the neatly appointed, Art Deco-inspired display cases were cobbled together in the wee hours.

The arduous move was chronicled by the New York Times. Tiffany assigned 30 security guards and nearly 600 security cameras between both locations to keep careful watch over 114,179 individual pieces of jewelry, including at least one 10.64 carat diamond engagement ring with a $2.5 million price tag. Everything was assigned a bar code and fastidiously crossed off after arriving at its new home. According to both Tiffany’s and the NYPD, everything remains accounted for now that the operation is complete.

Considerably brighter than the wood-paneled address currently being updated, could its aesthetic signal what shoppers will see once renovations are complete? Brand representatives couldn’t say as the final plans are still developing, plans which were no doubt upended when the company was acquired by Bernard Arnault and his LVMH group, which owns Louis Vuitton and Dior, for a whopping $16.2 billion.

Arnault is rather notorious for his focus on the in-shop experience and it isn’t uncommon for him to visit the stores of brands LVMH owns when traveling. It’s been reported he even visits the Louis Vuitton flagship near his primary office nearly every day to make adjustments to the merchandising and speak with staff to better hone strategy.

“There is a lot of improvement to do—as there is in general for a number of brands—for the stores, the design of certain stores could certainly be improved,” Arnault told WWD after making his first official visit to Tiffany as the owner. We’ll have to wait for just shy of two years until we learn exactly what he has in mind.