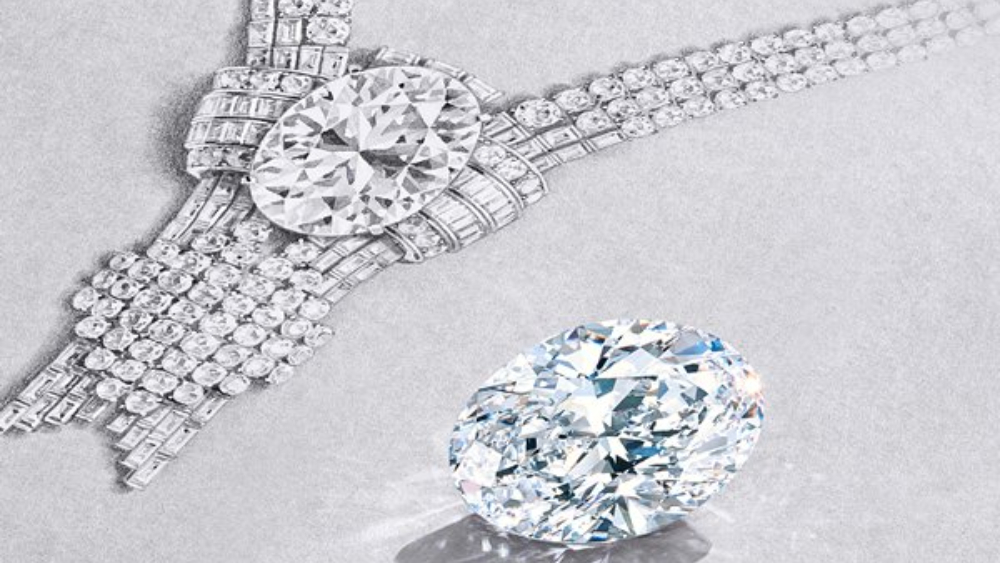 The heritage American jeweler needs something truly spectacular to mark the reopening of its Fifth Avenue flagship in 2022, which is currently undergoing extensive renovation. The solution? Mining the archives to find a design worthy of the occasion. The new creation will be based on a necklace the firm created for the 1939 World’s Fair, but, to take things up a notch, the original model’s aquamarine stone is being replaced with an 80-carat diamond.

The twinkling gem will be the largest Tiffany has ever made available for purchase and is only eclipsed in size by the legendary Tiffany Diamond, which is famously not for sale. Not only large as far as diamonds go, it also has a crystalline D color grading and is internally flawless, so every facet sparkles to its maximum ability. “The new necklace perfectly reflects our brand heritage as a New York luxury jeweler, whose founder was known as the ‘King of Diamonds,” Victoria Reynolds, the company’s chief gemologist, said in a statement.

But more than just visually dazzling, it’s also representative of Tiffany’s traceability commitments. This particular stone was responsibly sourced from Botswana, Africa, and its provenance was revealed in keeping with the brand’s Diamond Craft Journey, which ensures responsible diamond cultivating practices. Last year, Tiffany became the first major jeweler to disclose the origin of all newly mined, individually registered diamonds of .18 carats or higher.

The original necklace was designed to inspire the 44 million visitors of the World’s Fair, which took place in Queens, New York. In a fortuitous example of parallelism, its unveiling was intended to set the stage for the opening of its flagship, which was later made famous by films like Breakfast at Tiffany’s. And a year from now, the necklace’s gleaming successor will welcome customers and tourists alike back into that restored space.