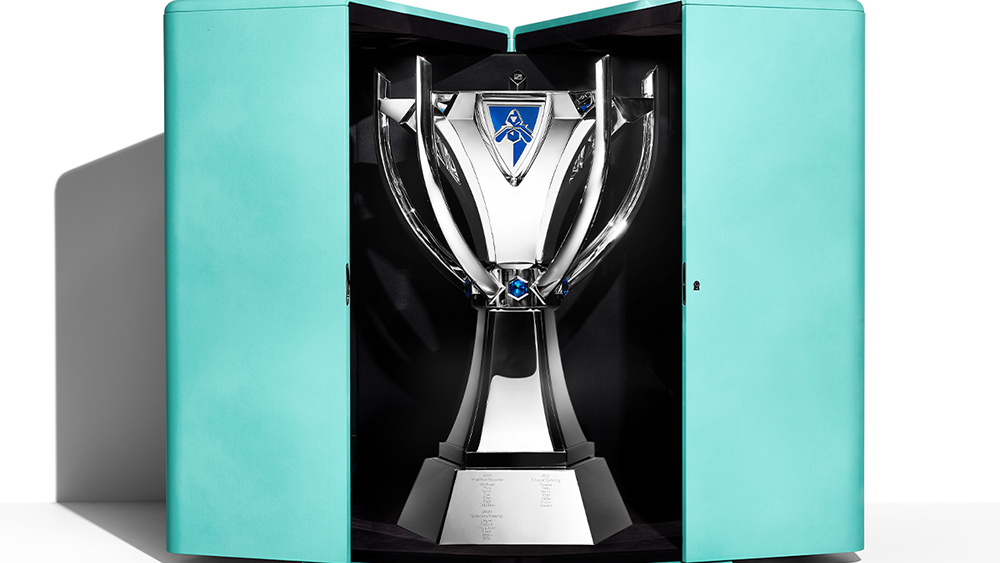 The storied American jeweler just unveiled a redesigned version of the Summoner’s Cup that is awarded annually to the winner of the League of Legends World Championship. The modern redesign was conceived during an extensive creative process between LoL Esports and Tiffany. It took four months (or roughly 277 hours) of meticulous work to come to fruition.

Billed as the crown jewel of esports, the Cup weighs 44 pounds and stands at approximately 27 inches. It was created at Tiffany’s hollowware workshop in Cumberland, Rhode Island, which produces more than 65 trophies each year. The house’s expert artisans paired age-old tools and techniques dating back to the mid-19th century, with the latest innovations to bring the sterling-silver masterpiece to life.

The cup, which was previously quite round and bulbous, now has a sleek, angular silhouette. It’s been fitted with a few sizable blue gems, as well as logos for the five positions in LoL. The base has also been engraved with the names of the recent championship winners.

“The Summoner’s Cup is a symbol of greatness in esports and the crowning achievement in League of Legends,” Naz Aletaha, global head of League of Legends Esports for Riot Games, said in a statement. “The teams who hoist it represent the best of our sport—their mastery forever a part of LoL Esports’ history.”

The Cup’s been fitted with a few sizable blue gems.  Tiffany & Co.

The League of Legends World Championship, or Worlds, is returning to North America this September for the first time since 2016. The pinnacle of LoL competition, the month-long tournament sees the top 24 teams from 12 diverse regions fight it out for the world champion title. Year after year, Worlds continues to achieve record audience numbers. In fact, the 2021 finals attracted more than 73 million peak concurrent viewers.

The redesigned Cup has a more angular silhouette.  Tiffany & Co.

This year’s competition will kick off on September 29 with the play-in stage in Mexico City. The finals will take place in San Francisco on November 5. Let’s see who takes home the Summoner’s Cup.