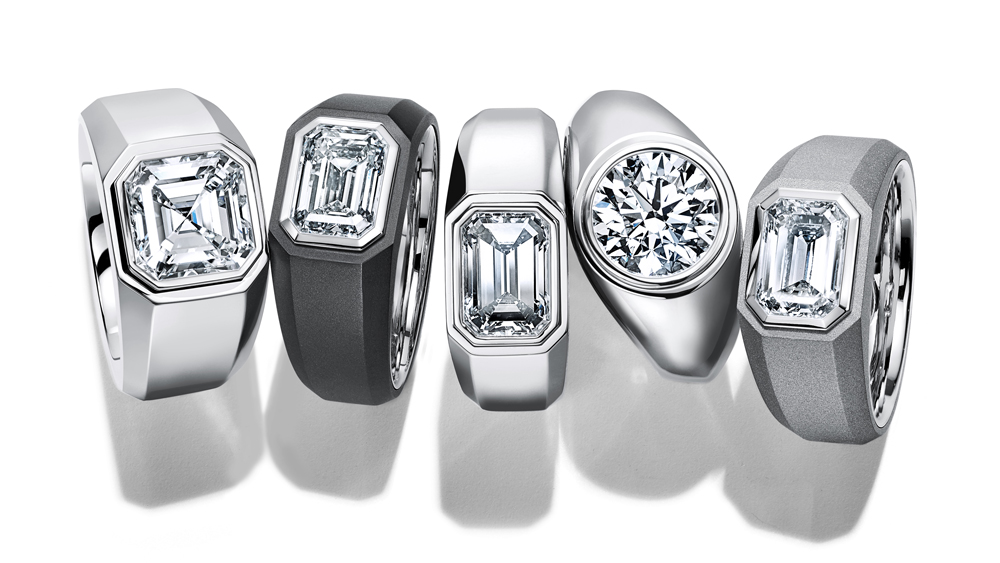 Tiffany, the company that set a new standard for women’s diamond engagement rings when it introduced its trademark setting in 1886, is aiming to start a new marital tradition with a line of engagement rings for men. The bands, in either titanium or platinum, are designed in the signet-ring style, but incorporate a large diamond instead of insignia or hardstone as the central feature.

Tiffany is touting the collection as a modern, bold departure from the conventional band that most men only start wearing after their wedding ceremonies. And there is a logic to them: Women are not the only people who get engaged, so why should the be the only ones who get to wear diamond rings as tokens of their betrothal?

The collection, which launches on Monday, is called The Charles Tiffany Setting, not because it incorporates a new setting technique, but because it is a tribute to the iconic (and widely copied) six-prong Tiffany setting created by founder Charles Lewis Tiffany. Each ring is designed to hold either a round brilliant or emerald cut diamond of up to five carats in a bezel-style setting. The round brilliant cuts are set in streamlined, knife-edge bands that the company says are inspired by the band on the ladies’ Tiffany Setting. The styles with emerald cut diamonds are designed with strong, architectural beveled edges, reflecting the tendency for men’s jewelry to have a masculine edge that sets it apart from ladies’ designs. Although, now that signet rings are growing in popularity among women, there is no reason why these men’s engagement rings couldn’t also be worn by a woman, possibly as a cocktail ring.

The collection is a welcome reflection of modern society has changed. A bride can use one of these rings as a way to propose to a man instead of the other way around—and they give men proposing to men a diamond option, too. Either way, The Charles Tiffany Setting aims to put big diamonds on the left hands of the grooms.

The company is also ahead of the curve on socially responsible sourcing and offers a full history for each diamond it sells. It includes the diamond’s region or country of origin, where it was cut, graded and quality assured, and where it was set. The information can be printed on the Tiffany Diamond Certificate, which extends a lifetime warranty.