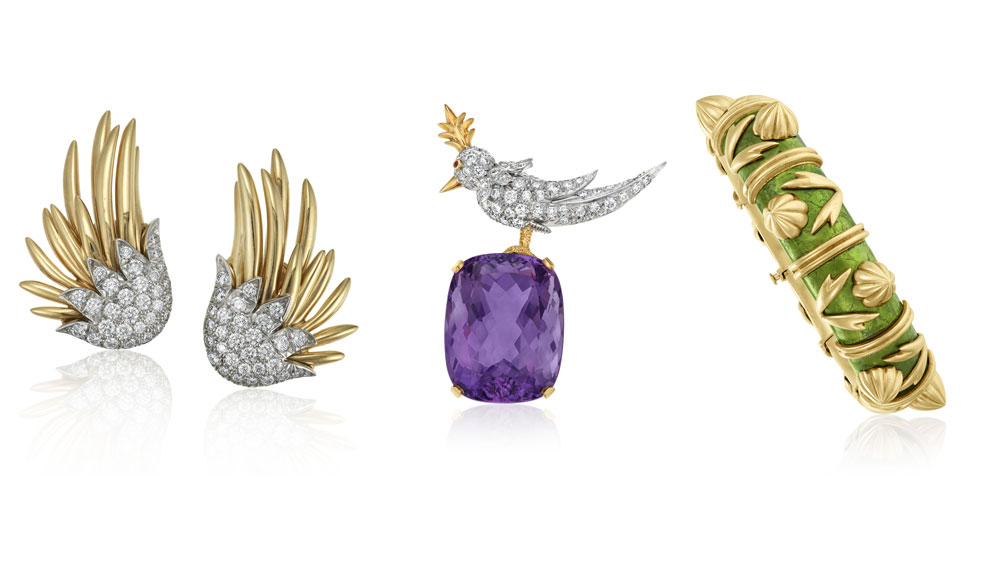 Tiffany & Co. is one of the few jewelry houses to establish a cabal of in-house designers whose names are as famous as the brand itself. They include Elsa Perretti, Paloma Picasso and Jean Schlumberger, the latter of whose designs still get top billing at jewelry auctions. Christie’s is selling 18 of the designer’s pieces in its Jewels Online auction running from September 19-30.

When Schlumberger was a young man in Alsace (which was then part of Germany), his parents sent him to Berlin to pursue a career in banking. Instead he rebelled and went to Paris instead to follow his dream of becoming a jewelry designer, and eventually established a salon in New York City before joining Tiffany.

Schlumberger was one of the 20th century’s first designers (along with Bulgari and Cartier) to depart from the rigors of the emerald,sapphire and ruby dictates of the Belle Époque and early Art Deco era to combine semi-precious gemstones in unusual combinations. At the time, it was unheard of to include gems such as aquamarine, tsavorite, tourmaline and rubellite with diamonds in high jewelry. His unique style combined classic design elements with a large dose of whimsy. His idea was to capture the perfect symmetry along with the imperfections of nature, which translated to jewelry pieces that always seemed to be moving—a bird about to take flight, a flower in mid-bloom, or vines coiling around a gemstone, threatening to overtake it. “I try to make everything look as if it were growing, uneven, at random, organic, in motion,” he once explained of his design ethos.

Tiffany hired Schlumberger in 1956, set him up in a studio and furnished him with an unlimited supply of some of the world’s finest gemstones. He regularly traveled to farflung outposts in Bali, India or Thailand for inspiration. The result is some of the world’s most dynamic, sought-after jewelry. He was the first jewelry designer to win the coveted Coty American Fashion Critics’ Award in 1958; and the Musée des Arts Décoratifs in Paris—which houses Schlumberger’s original designs—honored him with a retrospective entitled “Un Diamant dans la Ville” in 1995 in a posthumous tribute. (He passed in 1987 at the age of 80 in Paris.)

“Great collectors understood how unusual his fantastical creatures were and they became very collectible,” says Daphne Lingon, Christie’s head of jewelry for the Americas. “We can say that Schlumberger’s impact on flora and fauna in the world of jewelry design was one of the most significant of the 20th century and ultimately, to have so many pieces in one sale is a testament to his enduring power.”

The 18 lots in the Christie’s sale represent Schlumberger’s signature blend of classic design layered with bold color and a touch of playfulness. There is a diamond-encrusted bird perched on top of a 70-carat citrine ($12,000-$18,000) and another on a 63-carat amethyst ($20,000-$30,000); a brooch designed as a camel in motion with a lapis lazuli cabochon for a hump and a bridle made of diamonds ($7,000-$10,000); another bird brooch with a body made of a jelly-bean-shaped boule of fine coral ($3,000-$5,000). The sale also includes some great examples of the designer’s signature enamel and paillonné bracelets, with thick, sculptural gold bars, seashells or vine motifs overlapping the brightly colored enamel (examples are estimated from $10,000 -$18,000).

In his day, Schlumberger attracted a loyal celebrity following, including the likes of Jacqueline Kennedy and Elizabeth Taylor. Today, with so many brands brokering red-carpet placement deals, his work seems overshadowed, but Tiffany is still producing his designs, much to the delight of serious collectors, and it’s only a matter of time before a new generation rediscover his work. This auction may be the perfect place to start. The 200 lots in the Christie’s Jewel Online auction also include pieces by Boucheron, Bulgari, Cartier, Hemmerle, JAR, Oscar Heyman & Brothers, Seaman Schepps, Taffin, Tiffany & Co and Van Cleef & Arpels. Over half of the sale is offered without reserve.