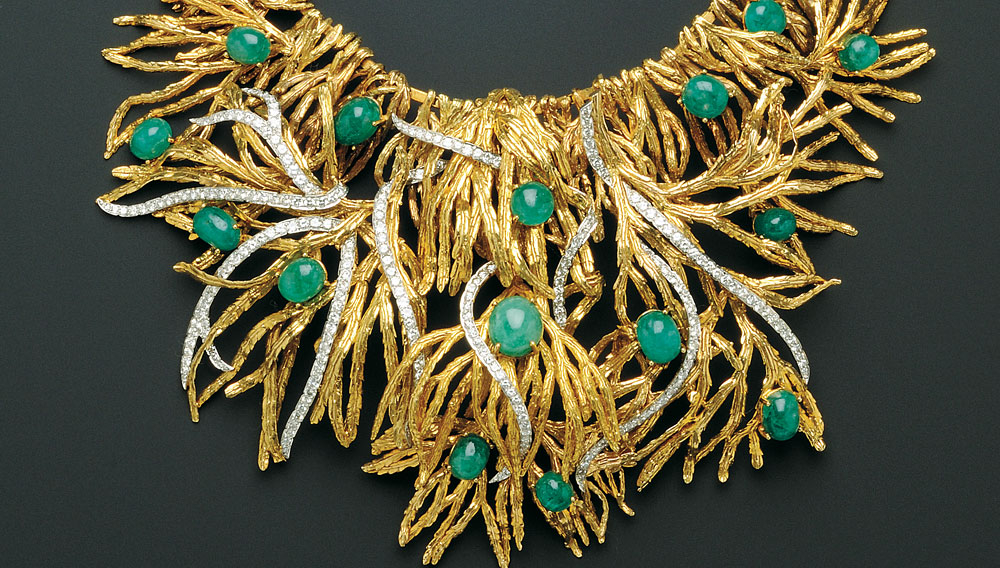 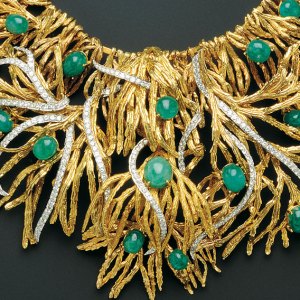 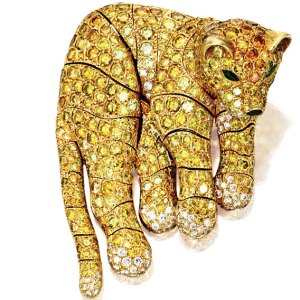 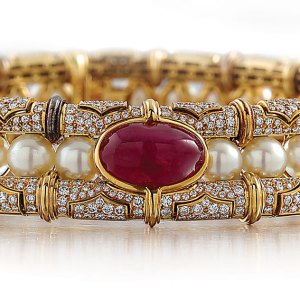 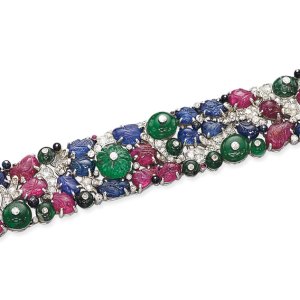 Mention the word “timeless” to a qualified jewelry expert and you’ll get the same general response: the Art Deco period. It seems to be a guaranteed thing, right up there with death and taxes. “People point to the Art Deco period as the most timeless, and there’s a good reason for that,” says Matthew Girling, the worldwide jewelry director at Bonhams. “Jewelers started making things in platinum, which is a very strong metal; they liked white; and they used a lot of diamonds.”

Platinum was key, as it allowed jewelers to move away from molds made of silver-topped gold and to venture into a new era working with a lighter and more durable material. Suddenly, design possibilities seemed endless. “The beginning of the 20th century, that’s where you see a huge spike in the freedom that the designers then had in jewelry and gemstones and metals,” explains Daphne Lingon, a senior vice president at Christie’s.

However, jewelry from the Art Deco period, which began in the early 1920s and lasted through the late 1930s, benefited from more than just advancements in materials and technology. As Lisa Hubbard, the chairman of international jewelry at Sotheby’s, explains, “Jewelry wasn’t created in a vacuum; it was very much a reflection of the times.”

The times of that era were defined by the Industrial Revolution. As the automobile grew more prevalent—thanks to Henry Ford and the assembly line—visionary coachbuilders were turning utilitarian pieces of machinery into rolling works of art. With advancements in engineering, man was taking to the sky for more dangerous and intrepid adventures, as evidenced by Charles Lindbergh’s 1927 solo flight across the Atlantic Ocean in a single-seat, single-engine monoplane. Meanwhile, on the other side of the world, Howard Carter and George Herbert were—quite literally—digging up history with the discovery of King Tutankhamun’s tomb in Egypt. “Certain Art Deco pieces were inspired by the sleek machinery [of the time],” says Hubbard, supporting the claim that the culture of the 1920s and ’30s had a significant impact on jewelry design. “So much of what was produced in the early years of the Art Deco period was based on a fusion of designs from India, Persia, Egypt, and China. Everyone was susceptible to pursue the exotic, but each had their own interpretation of it.”

Coming from such a culturally rich time in history, it’s no wonder that Art Deco jewelry designs have withstood the test of time. From that time onward, mankind has steadily—and swiftly—reduced the world from an expansive planet teeming with mystery and intrigue to one utterly exposed and feeling much smaller than it did only a short time before. The Art Deco pieces were revolutionary at the time, but today, they are jeweled reminders of an era characterized by a resounding sense of adventure. “If there’s that chime of recognition with an era, those are the designs that potentially become future classics,” says Girling. “They make you reminisce and look back with some fondness on a period of time. If it doesn’t echo, then it’s not going to work.”

Jewelers during the Art Deco period, for the most part, were not held hostage by a clientele that demanded sizable stones. Such a demand has come to define modern-day jewelry making, at least according to Camilla Dietz Bergeron, a purveyor of fine antique, period, and estate jewelry and the principal owner of her namesake gallery, Camilla Dietz Bergeron Ltd. on Madison Avenue in New York. “Today people tend to want something that is just big stones,” she says. “The Deco period was about design. A lot of that jewelry had small stones, but it was the design that was just so spectacular.

“I have platinum and diamond drop earrings from the Art Deco period and I just don’t need anything else,” she continues. “I can wear them with everything.” Therein lies another distinguishing factor when it comes to determining the timelessness of a piece of jewelry, and it’s one echoed by many experts in the field. As Girling explains, a piece of jewelry accented by a fantastic combination of multicolored stones may catch your eye—and it may prove to be a sought-after piece during the time in which it is crafted—but it will lose that luster as people begin to realize that it has little versatility. “If somebody is buying jewelry and putting together a collection, they like wearing it and expressing themselves in a certain way,” he says. “Women are expressing themselves through the jewelry. They’re not tucking it away and looking at it in an academic way.”

Sometimes, however, a piece will earn a timeless distinction not based on a design that makes it easily worn, but instead by the persuasive person who may have worn it. In those cases, such a piece of jewelry may be considered a classic, but that status cannot be rationalized by the design. As a way of example, Victoria Bratberg, the director of fine jewelry at Skinner Auctioneers, points to a pair of gold cuffs once worn by Jacqueline Kennedy Onassis. “Would they be as famous if she wasn’t photographed wearing them a number of times?” Bratberg asks. “Probably not. When someone iconic wears a piece, the piece becomes somewhat iconic, as well.”

Hubbard won’t argue with that theory, but she is more inclined to believe that, over time, the artistic merit of the jewelry itself will determine the final fate of the piece. “Having an iconic representative that you can drape your things over can make a big difference,” she says, “but at the end of the day, it’s the designs that last. The icons don’t last, but the jewels do.”

Seeking Out The Artisans

Looking back at jewelry from the ’20s and ’30s, the pieces that were the most extraordinary came from houses like Cartier and Van Cleef & Arpels, though today, those same houses are recognized as having more mainstream appeal (bespoke design services are available for select clients). So what happened? Business is what happened, according to Bratberg. “Back then, it was an art form for them,” she says. “They weren’t designing for the mass public as they are today. By today’s standards, that’s how they stay in business. Now they want to sell to everyone and they don’t want to be exclusive. They want the exclusive name, but they want to create jewelry that’s approachable by everyone and a bit more understood by everyone.”

However, just because the major houses were producing fabulous designs 90 years ago doesn’t mean there weren’t other, smaller boutique manufacturers crafting equally beautiful pieces. René Boivin, Suzanne Belperron, and Pierre Sterlé were a few of the lesser-known jewelers responsible for breathtaking designs, and according to Hubbard, their legacy has prevailed. “These were smaller jewelers,” she acknowledges, “but they created enough of a name for themselves that people looked for their pieces and [now] they’re collectible.”

Because the major houses have diverted their attention to mainstream demands, an enthusiast today must seek out the modern-day Boivins, Belperrons and Sterlés if they want to find pieces that have the potential to captivate collectors a century from now. Such a task isn’t always easy. Joel Rosenthal and James de Givenchy are two contemporary jewelers that likely are on the radar of most enthusiasts; but Susan Abeles, the head of the U.S. jewelry department at Bonhams, points to John Paul Miller, a 93-year-old goldsmith just outside Cleveland, who, for most of his career, produced jewelry from a narrow workbench in the basement of his home. “He sits down and makes it himself at the bench,” she says. “He does the gold work, the enamel work, the polishing and finishing of the stones. He’s the artist doing the drawing. He represents the best of contemporary arts-and-crafts jewelers that do everything from start to finish.”

Another jewelry artist that experts are tracking is Nicholas Varney, a graduate of the Gemological Institute of America in Vicenza, Italy, who opened a design studio in New York City. “He uses a lot of interesting stones and the workmanship is fantastic,” Bratberg says. “He’s still young, so he hasn’t been around long enough to have that recognition, but he may get there.” And Abeles points to Wallace Chan, a Hong Kong-based jeweler who works with everything from copper to wood to gemstones, as another up-and-coming craftsman who is producing what she describes as “cutting edge” and “beautiful” designs.

Collectors have an equally difficult challenge, especially if they’re attempting to project what might retain its desirability decades from now. As Girling says, “To predict what’s going to be tomorrow’s classic is very hard.” But he does point to one of his clients who began purchasing pieces from the 1960s only a few years removed from that decade. (Experts suggest that the big chunky gold designs of the 1960s and 1970s are beginning to rival the Art Deco period designs in the eyes of collectors—not because the Art Deco designs have lost favor, but because they are growing scarcer.) “She bought incredibly well at the time,” he says. “She thought that the designs were good and stuck to her guns, rather than be deflected by what others said and did. It’s quite brave to do that. She was buying in an era that we had just moved out of and people were asking, ‘Is this yesterday’s thing?’ But she had the foresight to see it as tomorrow’s collectible.” For collectors looking to appraise a classic design and assess the longevity of its value, the auction scene is probably the best place to look. But when it comes to some of the newer designers—the Nicholas Varneys and Wallace Chans—collectors will have to trust their instincts and, in some cases, ignore what the auction results might suggest. “A lot of the newer manufactured jewelry… some of it is not going to do well at auction,” Bratberg says, “just because it hasn’t been around long enough. Their name hasn’t been around long enough for the secondary market to kick in.”

But as Hubbard reveals, jewelry collecting can be as passionate and rewarding as any other form of collecting. “For people who like to have something that is unique or is reflective of a certain period that they feel an affinity for, jewelry can be just as interesting an acquisition as fine or decorative arts,” she says. “You’re only as limited as you want to be.”

And while most other experts will urge collectors to buy only what they like, Hubbard acknowledges that the intended use and function of a piece of jewelry isn’t the only reason to buy it. “In this market, with a volatile stock market and real estate not doing so well, there are a lot of people focusing on jewelry as wealth preservation,” she says. “It’s a pretty stable market. There are reasons to buy jewelry above and beyond just wearing something pretty.”