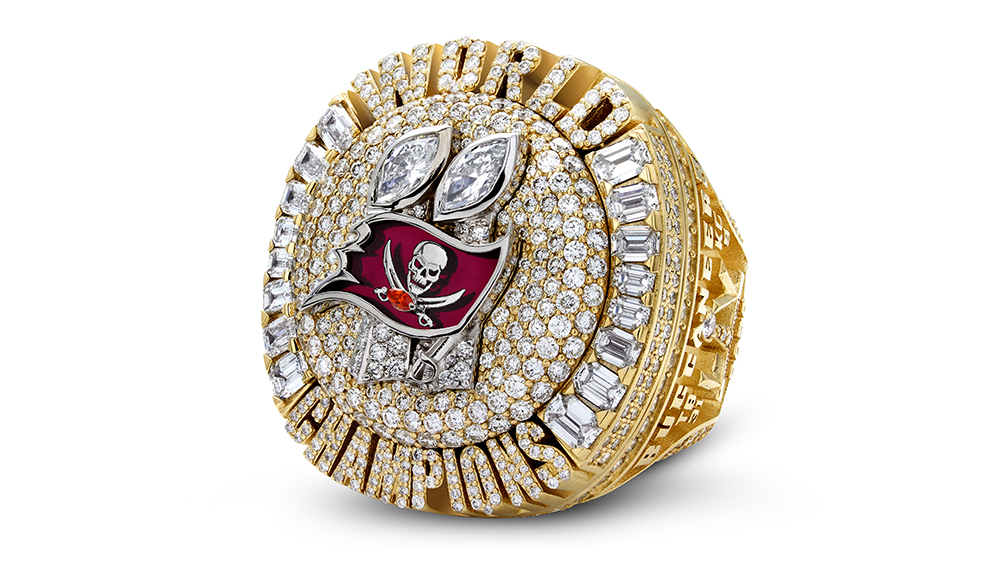 Tom Brady may have already had six Super Bowl rings from his time with the New England Patriots, but that doesn’t make the seventh any less special. In fact, the latest just might be the best looking one of the bunch.

The NFL star and the rest of the Tampa Bay Buccaneers received their Super Bowl LV rings in a private ceremony held for players, coaches, staff and their families on Thursday night in Florida, ESPN reports. And the diamond-encrusted bauble, which was designed by Jason of Beverly Hills, immediately stands out as one of the most stylish NFL championship rings yet.

Rather than go with Jostens or Tiffany & Co like so many teams before them, the Buccaneers entrusted their second Super Bowl ring to the NBA’s go-to designer for championship jewelry, Jason Arasheben of Jason of Beverly Hills, though the team’s front office, players and even coaches contributed ideas. The gigantic ring is the first the jeweler has crafted for an NFL team, and it’s clear he wanted to make a memorable impression. Based on the photos, as well as the players’s social media posts, it appears he did just that—and then some.

The ring—which Brady called “pretty sick” on Instagram—features 15 carats of white diamonds, along with 14 karat yellow and white gold. In total there are 319 diamonds, meant to represent the team’s 31-9 victory over the Kansas City Chiefs last February. The top features two Super Bowl trophies, representing the team’s NFL titles, and the Bucs’ signature flag logo carved from a red stone. To personalize the rings, each one bears a team member’s name and number. The real highlight, though, is a twist-off face that opens to reveal a hand-engraved three-dimensional replica of the team’s home, Tampa’s Raymond James Stadium, which was also the site of Super Bowl LV.

“We’ve done NBA rings, Soccer rings, MLB rings, and even World Series of Poker bracelets, but this was our first Super Bowl ring,” Arasheben told Robb Report. “We didn’t just want to go big with carat weight to make a statement, like most companies would do. We needed to redefine what made a Super Bowl ring. I’m so proud of my team for pushing the limits of design and incorporating more season storylines into this design than I think we have ever done. The Buccaneers wanted to defy tradition, and we did that together.”

As for the price of each ring, Jason of Beverly Hills isn’t saying. But when you consider all the diamonds and gold, as well as the special functionality, it’s fair to say they command a pretty penny. We understand the desire to keep the cost close to the vest, though. After all, you can’t put a price on victory.