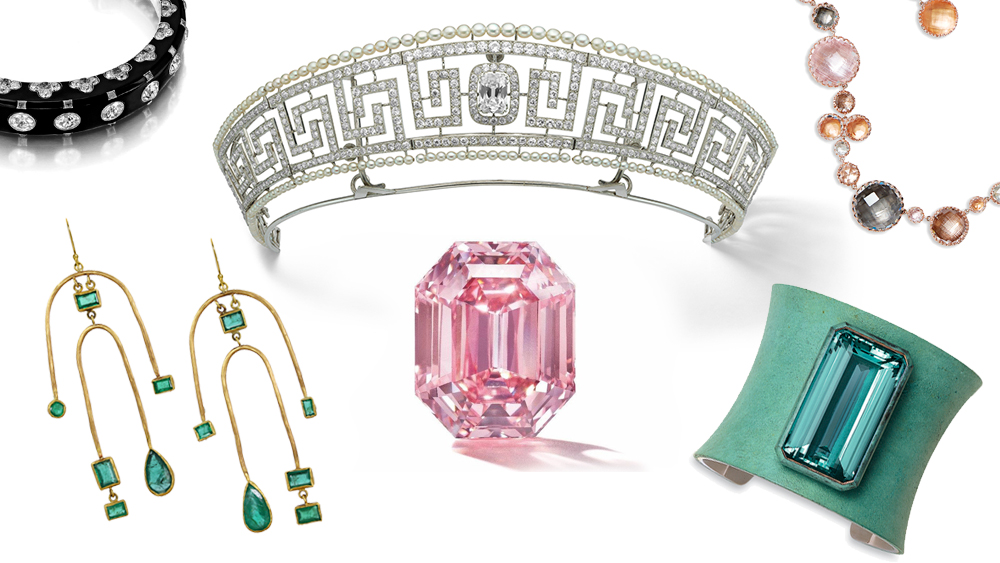 Over the last 12 months, a flurry of activity has energized the jewelry world—massive diamonds were discovered, long-lost pieces made their way to auction, and a new crop of designers presented fresh takes on the classics. Here, we spotlight the 10 stories you found most compelling. Cheers to 2019—and even more dazzling news.

Back in May, a stunning octahedron diamond was unearthed in Canada’s Gahcho Kué mine—it’s the largest that mine has ever produced. The gem was later sold at auction in June for an undisclosed amount—but, you can bet it was a pretty penny. While this most recent discovery at Gahcho Kué is a thrilling omen for Canadian mining enterprises, the planet’s largest top-quality diamonds are still primarily found in Africa—in fact, Southern Africa’s Letšeng mine is world-renowned for producing large, high-quality diamonds that have the highest average selling price in the world.

Prepare to be wowed—Mellerio’s new Medici necklace is a total showstopper. Handmade with 15 rubies and more than 5,000 diamonds, the wraparound design is valued at $2.3 million. The Medici necklace draws design inspo from the 400-year-old house’s extensive portfolio of jewelry innovations. They’ve maintained a strong patronage since they began in France in 1613—Marie Antoinette was just one of their most devoted clients. Read more.

2018 was a landmark year for incredible diamonds. In November, Christie’s brought the Pink Legacy—a jaw-dropping 18.96-carat pink diamond—to auction. In the house’s 250-year history there have been only four similar diamonds brought to sale. It was one of this year’s most anticipated jewelry sales. And while we now know just how incredible the gem did at auction, our first introduction to the diamond turned lots of heads. Read more.

Back in February, Sotheby’s unveiled a white diamond that was considered the largest and purest example ever unearthed—the rarest white diamond ever to come to market. “In the course of my long career, which has brought me close to some of the greatest stones the earth has ever yielded, I have not encountered anything quite like this,” Patti Wong, Founder and Chairman of Sotheby’s Diamonds said in advance of the sale. Its auction results later in the spring proved just how exceptional the gem was. Read more.

Imagine a diamond as big as two golf balls—that was the size of this massive 910-carat gem. Initially called the “Lesotho Legend,” the diamond is the fifth largest on record and was found in southern Africa’s Letseng mine—which has produced seven other diamonds that clock in at 200 carats or more. It was designated as Type IIa, which is the purest and most rare form of the gem, often described as a pool of water. The diamond later sold for a whopping $40 million. Read more.

10 Most Iconic Jewelry Designers of the 20th Century

Ever felt a little out of your depth in convos about jewelry’s big names? Vintage jewelry expert Lee Siegelson is here to help (and make you look a lot more in tune). Siegelson names the must-know jewelry designers from the last century—from Cartier to Calder—and breaks down what each is known for. Consider this your cheat sheet on the last century’s preeminent jewelry designers. You’re welcome. Read more.

Whether you are just building your collection or helping a loved one with theirs, this guide is here to help. We turn the spotlight on the eight versatile jewelry designs, each of which can go from everyday wear to high-wattage glamour. A healthy combo of all will compose a balanced jewelry collection.

Rivière necklaces, cocktail rings, chandelier earrings—learn how to wear them and who makes the best examples.  Read more.

This is How High Jewelry is Sold Today

How are the highest-level jewels actually sold? To find out, we went behind-the-scenes and got an inside view of ultra-exclusive private viewings which showcase pieces that never reach stores. In order to sell their one-of-a-kind creations sell for six and seven figures, jewelers spend millions of dollars wining and dining their top clients. Does romancing with stones work? Do the customers buy? Read more.

The Cartier Tiara That Was Rescued from the Lusitania

Every piece of jewelry has a story—and this one is unforgettable. Lady Marguerite Allan barely escaped when the Lusitania sunk in 1915. Along with her life, she salvaged this Cartier tiara, a pearl and diamond-studded creation that calls upon Grecian and Art Deco styles. The design and its tragic history was brought under the spotlight earlier this year.  Read more.