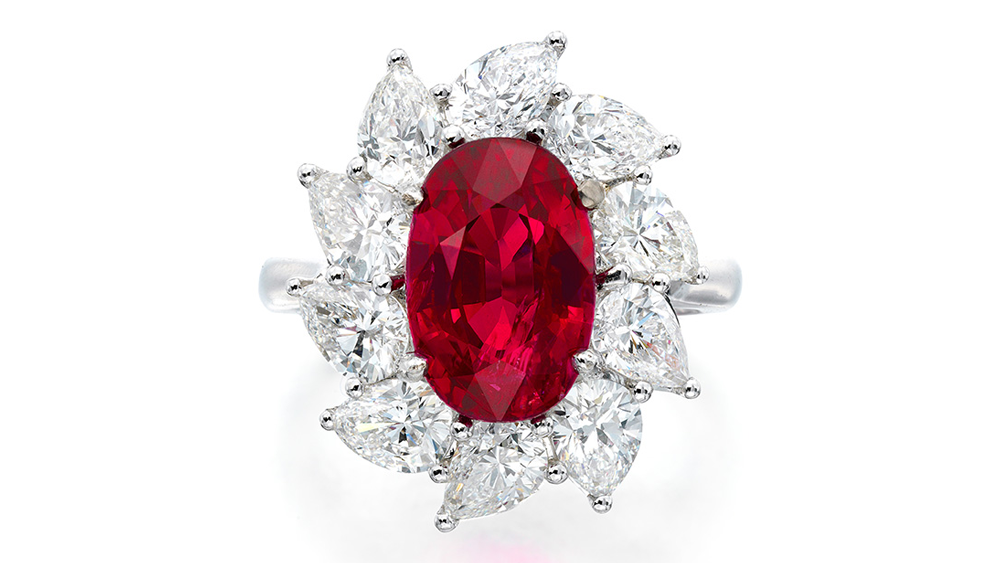 Phillips, known for its record-shattering watch auctions, is upping its game in the jewelry segment just in time for some high-level Christmas shopping. Its December 13 New York Jewels auction is stacked with several important gemstones, including an exceptional Burmese ruby ring, a few one-of-a-kind treasures from Van Cleef & Arpels and some fancy colored diamonds that qualify as investment pieces.

The top lot is the Red Dragon, a 6.43-carat Burmese ruby and diamond ring estimated at $1 million to $1.5 million. The exceptional purplish-red color is natural (many rubies are heat-treated). It is also extremely clean, with a high clarity value.

Also in the investment gem category is a 4.05-carat fancy intense pink diamond, set as a pendant by UK retailer Boodles, estimated to sell for $800,000 to $1,200,000. The chain is diamonds-by-the-yard style, set with stations of brilliant-cut diamonds in platinum. Also up for grabs from Boodles is a ring set with an 8-carat internally flawless colorless diamond of D color estimated at $250,000 to $350,000. A GIA certificate rates it as VS2 clarity. For those looking to “put a ring on it” there are plenty of options. Another stunner is a 2.49-carat fancy vivid yellow diamond ring in an Ashoka cut—a round-cornered rectangular modified brilliant cut. It is also VS2 clarity and estimated at $50,000 to $80,000. A Colombian emerald ring by Tiffany & Co. dated circa 1915 is flanked by two shield-shaped diamonds, estimated at $60,000 to $80,000.

Leading the list of signed pieces up for grabs are several jewels by Van Cleef & Arpels, including a gold and diamond compact with the maison’s signature ballerina motif on the cover surrounded by a leaf motif that is elaborately engraved and set with diamonds. It does, however, also come with a personal engraving so, if you know and love someone named Lillia, this would make a great gift. Even better if your name is Jerry. It is inscribed with the words: “Lillia, You are my heart of hearts. With appreciation, devotion and much love. Jerry Paris, October 1984.” It is estimated at $30,000 to $40,000.

A puppy-themed brooch from Van Cleef & Arpels will make for a whimsical gift this holiday season and is a signature style of the house. It is made of delicately intertwined gold wire with emerald eyes and an onyx nose and charmingly floppy ears. The piece, part of Van Cleef’s Bestiary collection, is one of the rarest and most intricate designs in its “lost puppy” brooches from the ’50s and ’60s. It is estimated at $8,000 to $12,000.

By the way, here’s a hot tip: Phillips tends to put its ladies’ watches in jewelry sales, and the estimates are low. This sale includes pieces by Patek Philippe, Harry Winston and Oscar Heyman.

Preview Appointments can be scheduled from December 6 to 12 at Phillips’ 432 Park Avenue location.