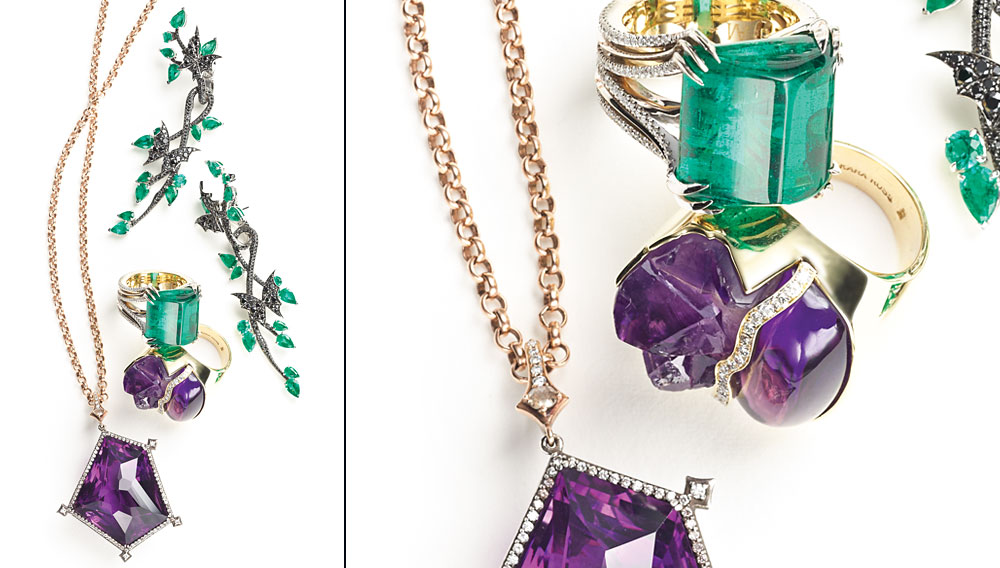 In just six years, the mining company Gemfields has become one of the world’s major producers of exceptional colored gemstones—a feat that was accomplished with the company’s policies of sustainability and transparency in force. The London-based firm holds large stakes in emerald and amethyst mines in Zambia, as well as in a ruby mine in Mozambique, and continues to explore the world for more gem deposits. In fact, Gemfields produces 20 percent of the world’s emeralds, delivering every stone to market while adhering to fair trade practices and the highest environmental, safety, and social standards.

This year, rather than simply selling its glittering emeralds and velvety amethysts to gem dealers and wholesalers, the company placed the stones directly in the hands of some of the top international jewelry designers, such as Stephen Webster, Kara Ross, and Alexandra Mor. The result is a collection of more than 45 one-of-a-kind pieces that were exhibited around the world and are now available through CoutureLab (www.couturelab.com) and the individual designers. “Today people look for more individuality and personality in their jewelry,” says Ian Harebottle, Gemfields’ CEO. “And we want consumers to feel good about buying gemstones from mines that support local communities.”

Brown diamonds, long overlooked by serious collectors, are catching the attention of serious jewelry designers. “Brown diamonds are a lot of fun, especially for people who already own the classic white diamonds but are looking for something different,” says Eve Goldberg of the diamond house William Goldberg. The smoky stones, often tinged with yellow or pink, cost less than white diamonds and tend to be used in large sizes and casual, understated settings that might range from a fashionable brown pavé ring to an almost liquid teardrop pendant.

The Cartier brothers—Louis, Pierre, and Jacques—were an adventurous trio who explored Asia, the Middle East, and Africa in the early 1900s in search of excitement, ideas, and clients. The brand’s latest high-jewelry collection, L’Odyssée de Cartier Parcours d’un Style, comprises a diverse array of elaborate designs commemorating the brothers’ travels. The warmth of an African sunset is expressed in earth-toned gemstones, such as tourmaline, quartz, and citrine. Bold, draping necklaces of bright carved rubies, emeralds, and sapphires are imbued with the look of India. Detailed, gemstone-encrusted dragon cuffs and a panda pendant evoke China. Like the Cartier brothers themselves, the new collection is traveling the world for a series of private presentations for the house’s top clients, who will doubtless find themselves transported without leaving the salon.

The British jeweler Shaun Leane—who, at age 15, began his career as an apprentice in London’s Hatton Garden jewelry district—trained for years as a classical goldsmith before turning his skilled hands to the task of fashioning flamboyant jewelry for the models strutting Alexander McQueen’s clothes on the catwalk. Today his namesake line reflects the full range of his experience, featuring edgy pieces sculpted with an elegant precision that represents the pinnacle of artisanship. Recently, for example, he has used snake vertebrae as a motif, intricately depicting the small, sinuous bones in white gold. “We can be daring in design, but when the piece is crafted, it retains a timeless quality because of the materials and the way it is produced,” he says.

When the jewelry designer Coomi Bhasin came upon an assortment of ancient arrowheads from an antiquities dealer, she had to have them. “They were man’s first tool,” says Bhasin, who was awed by these arrowheads carved from stones such as agate more than 20,000 years ago. The New Jersey–based designer created a series of about 50 one-of-a-kind pieces, setting the arrowheads in simple 20-karat-gold frames with brown- and white-diamond accents. These designs, though graceful and delicate, retain the weathered roughness of freshly discovered relics. “They appeal to the well-traveled woman who appreciates art and culture,” says Bhasin.

In late 1919, Gabrielle “Coco” Chanel (pictured) lost the love of her life in a car accident and went to Venice in search of solace. The enchanting city not only rejuvenated her spirit, but also influenced her work throughout the rest of her life. One of the legacies of her time in La Serenissima is the lion motif—a symbol of the city and the designer’s astrological sign. She displayed lion-themed artwork, including the bronze sculpture shown here, throughout her Paris apartment. Thus the lion is the focus of Chanel Fine Jewelry’s latest collection. Unveiled in June in Venice, each of the 58 pieces features an elaborate jeweled version of the regal cat. “The collection has a wide appeal,” says Benjamin Comar, the firm’s international director of fine jewelry and watches. “Some pieces are soft and fluid with movable parts, and others are bold with a rock-and-roll feeling, like the big lion medallions.”

Two years in the making, the collection was constructed in the company’s new atelier above its Place Vendôme store. New lion designs will be added every few months as they are finished in the workshop. Chanel’s signature lion has a distinctive soft, round face and is meant to serve as a talisman, according to Comar. Standout items include a playful pavé diamond medallion-style pendant necklace ornamented with an all-diamond lion’s head and a ring crowned by a three-dimensional leaping lion carved from a 92-carat yellow beryl. Other examples reference classic pieces conceived by Chanel herself, such as a triple strand of white, gray, and yellow cultured pearls with three small carved-gold lion heads framed in delicate diamonds. “We refer to our patrimony but never in a nostalgic way,” Comar says. “Coco Chanel was a forward-thinking designer, and we are always looking to the future with our designs.”