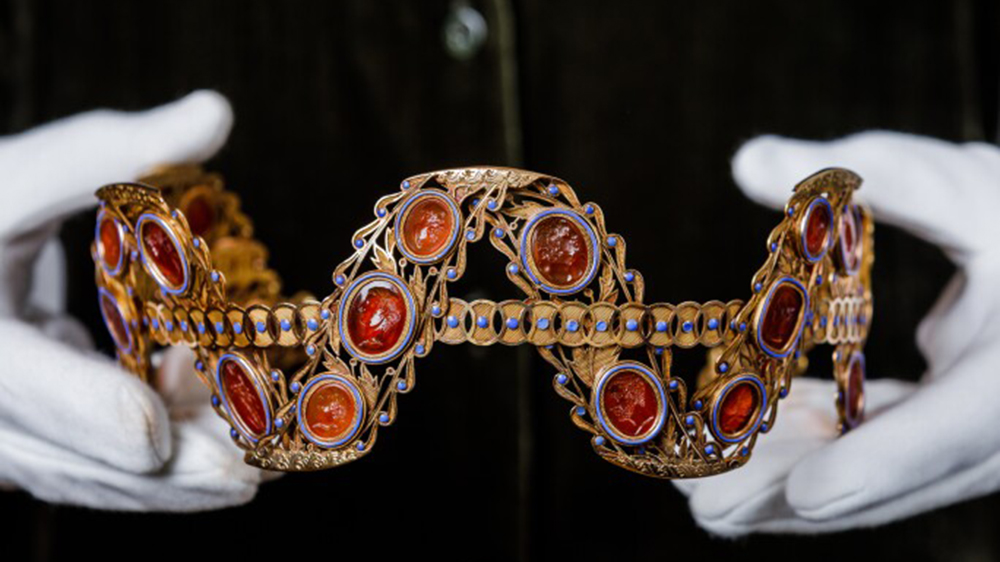 Two lavish tiaras believed to have belonged to Napoléon Bonaparte’s first wife, Joséphine, are going up for sale.

The bejeweled diadems are parts of jewelry sets that will be auctioned off by Sotheby’s next month in London. Having spent the last century and a half in private hands, the pair are expected to sell for as much as $675,000 combined.

When Bonaparte declared himself emperor of France in 1804, he didn’t just start a political revolution, but a cultural one as well. He and his wife sought to immediately establish themselves as fashion icons. In addition to looking regal, they also wanted to draw connections with ancient Rome, thus legitimizing Napoléon’s power, according to Smithsonian Magazine. For the emperor this meant wearing outlandish accessories, while for Joséphine it meant flowing dresses and neoclassical jewelry. In fact, the she is believed to have spent 25 million francs on clothes and jewelry during the six years she was empress (Napoléon had the marriage annulled in 1810 after his first wife did not bear children).

The tiaras that are going on sale are believed to have been made around 1808, and reflect the finest French craftsmanship of the era. Each is part of a parure, or a set of matching jewelry. The first (seen up top) is gold with blue enamel accents and features 25 carnelian intaglios or engravings; it comes with a matching comb, earrings and belt ornament. The second is also made from gold, and is decorated with portraits of ancient deities like Zeus, Dionysus and Medusa. It includes a belt clasp and a belt ornament with a portrait of the Greek God of Thunder at its center. Both diadems are similar in style to one the empress can be seen wearing in an 1808 portrait by Andrea Appiani.

“These majestic jewels mounted with cameos and intaglios certainly evoke the style of the grand Empress Joséphine—her rank as wife of Napoléon Bonaparte, her impeccable taste and her interest in the classical world. Empress Joséphine was much more than just a collector of antiquities,” Kristian Spofforth, head of Sotheby’s London jewelry department, said in a statement. “By being the first to incorporate these cameos and intaglios into her dress, wearing them side by side with pearls and diamonds, she created an entire new fashion that swept Paris and the world, based on neoclassical forms.”

An 1808 portrait of Empress Joséphine Bonaparte by Andrea Appiani

After spending the last century-and-a-half as part of a private UK collection, Joséphine’s jewelry sets will be auctioned off as part of Sotheby’s London Treasures sale on December 7. The four-piece set carries an estimate of $270,000 to $405,000, while the three-piece set could sell for between $135,000 to $270,000. So if you want jewelry fit for a royal, that’s what it’s going to cost.