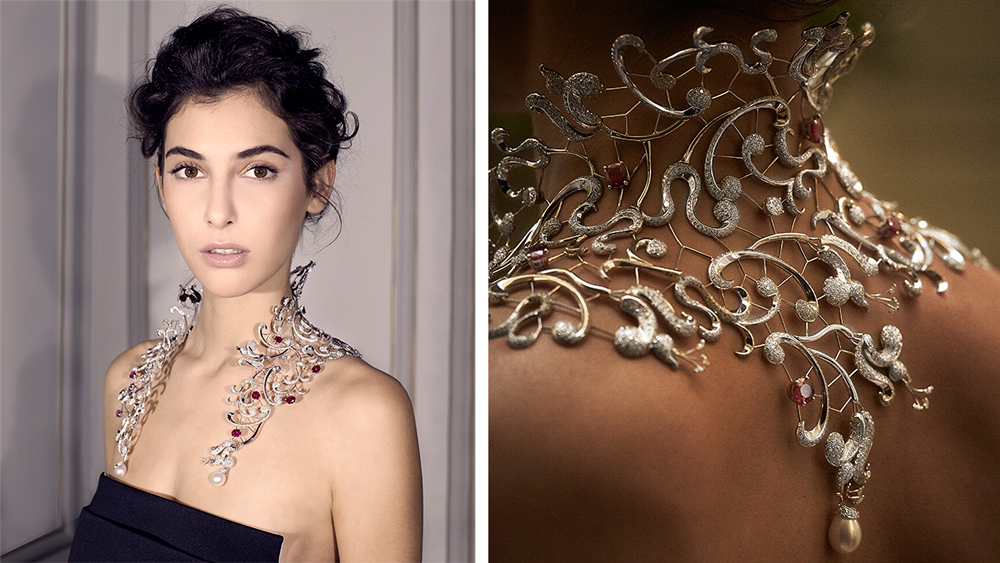 Mellerio—the high jeweler favored by European royals for more than four centuries—has debuted its latest creation, the Medici collar necklace. The design, which was handcrafted over 4,500 hours by a team of artisans, captures the brand’s traditional aesthetic while also incorporating contemporary technological advances. To gather inspiration for this design, artistic director Laure-Isabelle Mellerio (who represents the family’s 14th generation and is the first woman to hold said position) spent six months immersed in Mellerio’s design archives, which are housed within its Rue de la Paix boutique near Place Vendôme in Paris.

Over the centuries, the brand’s interest in innovation has remained one of its enduring characteristics. “Mellerio has developed a great deal of patents,” notes Diane-Sophie Lanselle, Mellerio’s communications director. “The first to be officially recognized dates from 1854, and [it] was created to protect the innovation of a new mix of metals to create flexible structures so that the jewels can naturally move but stay safe.” This flexible base structure is used on the Medici necklace to help the white-gold design move with the body while keeping its 15 rubies and more than 5,000 diamonds secure. The Medici necklace is valued at $2.3 million.

The new collar necklace is the latest in a long line of boundary-breaking Mellerio creations. Among them is a set of ornamental diamond-covered palladium nails that debuted in 1953, which were considered quite avant-garde at the time. More recently, the brand introduced the Mellerio Cut, a specific oval shape applied to diamonds and precious gems.

Mellerio’s high-jewelry pedigree extends back to the 17th century. Among the brand’s most iconic clients are Marie de Médicis—the Italian-born French queen was the first royal to request a custom design—and infamous jewelry-lover Queen Marie Antoinette, who purchased a cameo bracelet from Mellerio’s Paris boutique in 1870.

In recent months, Laure-Isabelle Mellerio has also debuted a duo of lively contemporary collections inspired by Lake Maggiore’s enchanting Borromean islands—a favorite getaway for the Mellerio family. The Isola Madre and Isola Bella were introduced earlier this year, with the third and final edition, Isola Pescatori, is due out in the next few months.