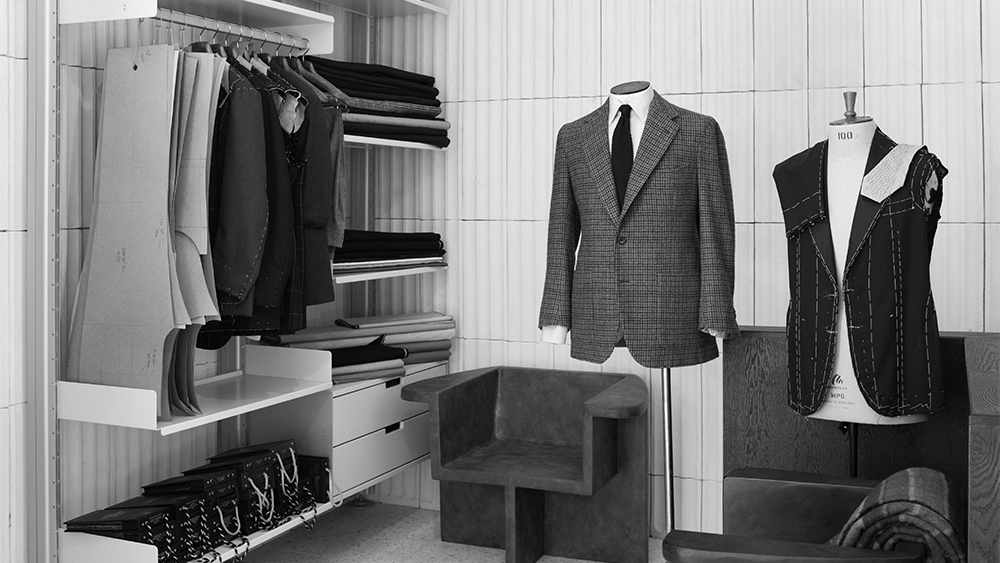 Since launching in 2017, Anglo-Italian has always found possibilities where others saw contradictions. The brand’s raison d’etre is Italian craftsmanship with an English sensibility. A sober color palette of grays, blues and browns combines with soft, handmade Neapolitan construction to produce a look that is classically polished yet decidedly modern. Where a typical British jacket relies on padding through the shoulders and chest to provide substance, Anglo-Italian’s employ a natural shoulder and rounded, open quarters with a low gorge that flatters the torso without needing to build it up—essentially, the best of both styles.

“What we did at Anglo-Italian was very English in the aesthetic, the mood,” says Jake Grantham, the brand’s co-founder. “We set ourselves out from Savile Row,” he explains, by “breaking the chain of the very structured look. We wanted to give Italian tailoring a spiritual home in London.” Anglo-Italian champions what Grantham calls the Italian signature, but set to an English rhythm: Flannel, tweeds and rainwear in winter, earthy linens and cottons in summer, charcoal and navy suits always.

In Marylebone, where the brand’s flagship is located, the redbrick architecture is livelier than the stately facades of Savile Row and Bond Street. The store is surrounded by independent bookshops, bakeries and bars; its interior draws on Italian industrial design rather than the old leather-and-mahogany routine. The shrine to Italy instantly gained a cult following. “We’ve become a bridge to the culture,” Grantham says.

Anglo-Italian itself is a nod to London House, the name chosen by Gennaro Rubinacci for his Neapolitan workshop in a mark of Italian Anglophilia. “There’s always been this cross-pollination,” Grantham observes. “It’s a respectful relationship with Italian tailoring.”

The fifth anniversary found the brand at a crossroads. “You’ve proved your point…Now it’s about consistency and making it better. We don’t believe in wholesale, we don’t build in a wholesale margin. And we don’t want to roll out ten stores.” Grantham compares the tailoring business to restaurants: He could easily leave the kitchen, franchise and have others cook under his name.

The bespoke service is exclusively available at the brand’s London store.  Anglo-Italian

Anglo-Italian has taken the opposite path, first launching a cloth collection, Anglo-Italian Tessuti, for customers with bespoke tailors. Now it’s taking the next logical step, launching a bespoke service of its own. “I believe in this peculiar model of retail,” Grantham says. “Opening bespoke is a big testament to that.” The brand has a strong e-commerce offering but is doubling down on the local and in-person. “We’ve gone the wrong way round, from ready-to-wear to cloth and to bespoke, without the safety of wholesale.”

Grantham’s earlier role, at the multi-brand store The Armoury in New York and Hong Kong, paved the way for bespoke. “At The Armoury, they were doing amazing things,” he recalls. It was an introduction to Italian tailoring for many customers, not just in style but in substance: “a spotlight onto craft, tailoring at its most finessed, its most pure.” He talks about tailors the way athletes talk about one of their own: conscious of the rigor and ingenuity it takes to be on the top of their game. “A lot of bespoke culture felt in peril under Covid, a lot of tailors weren’t getting work, and I felt really strongly that if I wanted this thing I loved so much to survive, I needed to do my part.” Beneath Grantham’s easygoing charm, there’s a quiet seriousness about the craft and Anglo-Italian’s part in it all.

Location is everything, especially for a brand that touts its combination of two indigenous styles. The bespoke service began as a truly local operation, cut and sewn in London, but the offering’s unexpected popularity quickly outstripped capacity, Grantham says. “The appetite is far beyond what I expected.” And so Anglo-Italian went full circle, opening a bespoke workshop in Italy.

The brand’s apparently backward journey makes sense. English tailoring houses have long outsourced their ready-to-wear offering to Italy, sometimes producing garments with very little connection to their bespoke. The Italian approach is to make ready-to-wear and bespoke in the same fashion, piece by piece. The only difference is the level of customization and handwork. (Well, that and the price. While MTO suits will run you £1,350 and up and MTM suits start at £1,650, the bespoke offering is priced from £3,350.)

Anglo-Italian is tweaking what Italian tailors already do so well, not reinventing their form. What Grantham keeps coming back to is the idea of tailoring as a deliberate spirit or sensibility. French New Wave cinema had a distinct aesthetic, he says, developed through its own obsessions with Alfred Hitchcock, John Ford and Orson Welles. In his way, Grantham follows the same philosophy: study, adapt, remix.

“It’s an uncertain time in terms of tailoring,” he says. “People are looking for direction. We’ve just had our best ever month for shirts, suits and ties, but you have to have very strong handwriting. A strong point of view.”