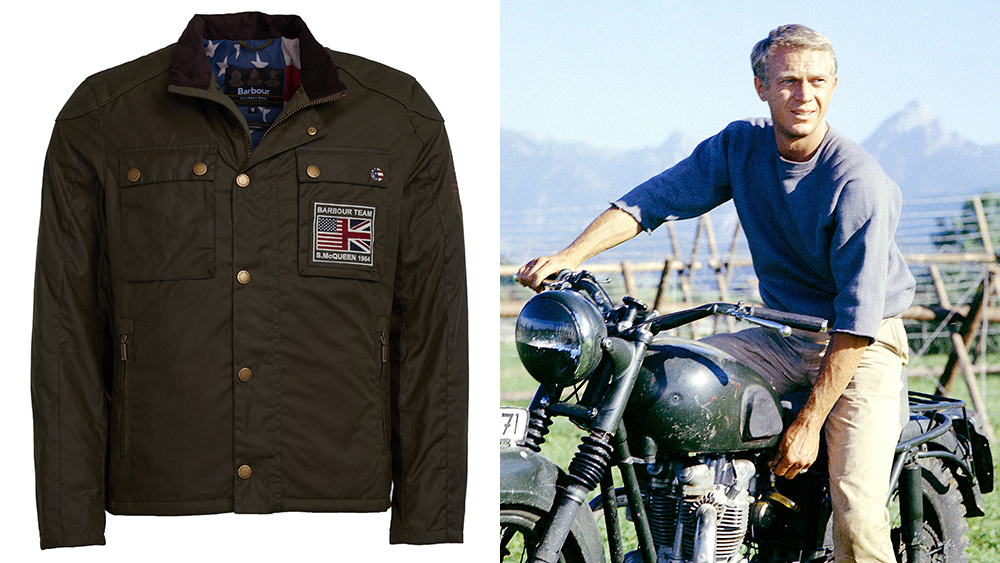 Legendary actor Steve McQueen’s passions way went further than just movies. The style icon was a skilled motorcycle rider, competing professionally in multiple racing tournaments across the globe. His gear of choice? Waxed cotton from Barbour, which outfitted many of the top motorcyclists during McQueen’s time.

Now, the British luxury lifestyle brand is introducing a new range of limited-edition apparel through a collaboration that honors the late actor. Barbour International, which first launched in 1936, has released a collection that includes its popular waxed cotton jackets, which offer protection and functionality for motorbike enthusiasts. The capsule is being sold exclusively at Macy’s.

Among the other pieces included in the 15-piece range include flannel shirts, the Gear Quilt jacket with zip fastening capabilities and the Ashbury Wax with large chest pockets and flag logo on the front. The T-shirts feature imagery and symbols from the International Six Days Trial, the annual motorcycling event that McQueen competed in 1964—a race during which he wore Barbour.

McQueen’s son, Chad, helped see this project through. He’s an avid motorcycling fan himself, having received his first mini-cycle at age six. “That’s what we did in our family, it wasn’t about popcorn or football or anything like that, it was motorsports,” he said in an interview with Robb Report. “When you’re immersed in something as a young kid you tend to pick it up.”

Chad started racing at age nine, and won the World Mini Grand Prix when he was 13. “That turned into car racing; I did that in the regional, national and professional level. Racing was and still is a big part of our lives, including my son and my daughter.”

Even though he says his doctor told him he can’t race anymore, he remains a lifelong member of the community. “I know a lot of people that are big collectors and I get to drive their stuff, so I’m pretty much surrounded by cars and motorcycles 24/7.”

He’s had a relationship with Barbour for over 10 years now, and says he knows exactly what his dad liked when it came to clothes. “When my dad would wear [Barbour] during his races, he wore it for protection,” he says. “But nowadays, for riding on the street and around town, these things are great. They’re stylish and super functional,” he added.  “I couldn’t be happier with the work they’re doing.”