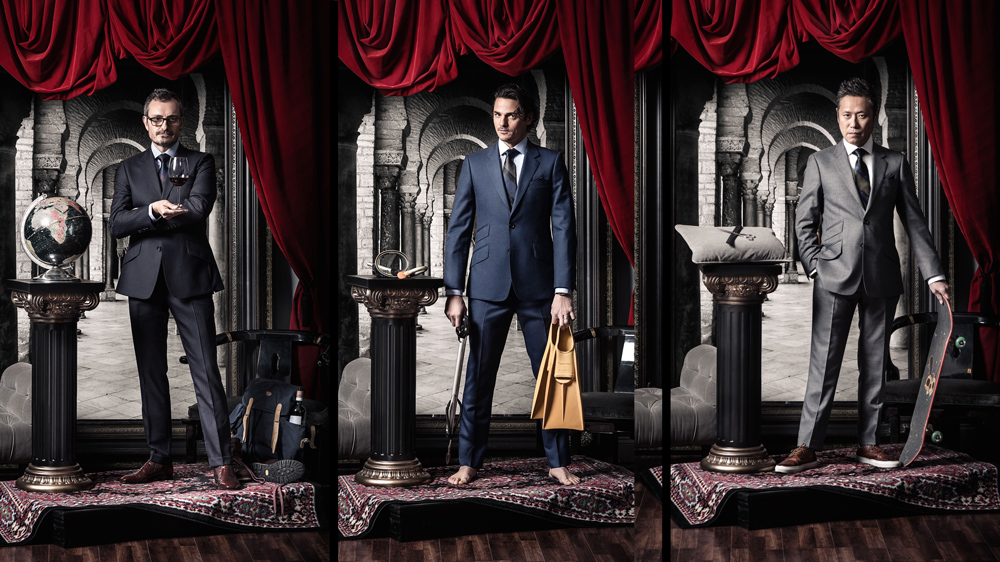 Niche tailoring shops have come and gone in New York City’s Nolita neighborhood, famous for its boutique retail, but Lord Willy’s has steadfastly held its own—recession included—for the last 13 years. Founded by husband and wife British expats Alex and Betty Wilcox, Lord Willy’s has always been a serious business with whimsical approach to the buttoned-up world of bespoke and semi-bespoke suiting. Now the Wilcox’s are expanding into ready-to-wear with a new line of ready-to-wear suits they’ve dubbed, Royal Bastard. “We wanted to offer a service to another market that couldn’t quite experience the Lord Willy’s world before,” says Alex Wilcox.

The new line of suits start at $1,550 and come in Savile Row’s Holland & Sherry fabrics and are tailored in Europe. “A good suit starts out with the cloth,” says Betty Wilcox. “You can have the best tailor in the world, but if you’re cloth is inferior it will start to sag on the elbows or in the knee or starts to wrinkle too much, and then when you dry clean it, it’s another animal all together.” The Royal Bastard line has also been made with two trouser sizes, so that customers can get as close to the best fit off-the-rack as possible. “We’re especially pleased with how the trousers turned out, because a ready-to-wear trouser by its very nature is so generic,” says Alex Wilcox. “The rise is very long and it’s usually a bit baggier on the backside. And typically, our clients either have a huge backside or no backside. So we’ve produced a trouser for both.”

Wilcox likens buying a quality suit to buying a quality watch. “You know in your late teens or early 20s, you’re probably buying watches that are around $300 or something, and then in the end you ask yourself, ‘Why am I spending money on these when I could buy something of quality that will last longer?’ Wilcox wears a Rolex Sea-Dweller given to him by his wife Betty that he refers to as his pirate’s earring. “It’s enough to bury me in and that should be about it,” says Wilcox.

The market for suiting, he adds, has changed drastically in recent years with prices running the gamut. “In recent years so the price of our ready-to-wear suit can be the top-end of a Suit Supply suit or it can be the low-end from a custom house or the average price of a big name ready-to-wear brand, but a branded suit at that price is rubbish,” says Alex Wilcox. “It has to be, because they’ve got the overhead—you’re ultimately paying for the label. And if you’ve bought a custom suit at that price, then I don’t know what you’re paying for—it will be an inferior custom suit.”

The Wilcox’s believe they have the highest quality ready-to-wear suit on the market and they may be onto something, as they’re already selling out of certain styles. Royal Bastard launched with six classical styles, but the Wilcox’s have plans to introduce new variations with a flannel and a glenplaid check coming out for fall. “We don’t produce thousands of these pieces, so it’s still very much limited edition,” says Alex Wilcox. “We produced just 10 to 15 suits per design.” The suiting comes lined in blue or black fabric, ties for the line come in rich dark colors, and shirting has been kept basic in popular color choices such as blue, white, pale blue, a blue stripe, and a pale violet stripe. Each suit comes with a midnight navy pocket square. “It’s been branded in a much more subtle way,” says Alex Wilcox. “We like to have contrasting linings with a little bit of a voice in each piece for Lord Willy’s, but with our ready-to-wear line we went the opposite way.”

Lord Willy’s has become known for its bespoke tuxedos with a starting price of $4,700, but the Wilcox’s plan to introduce two ready-to-wear tuxedos in the next two months. They’ll be priced around $2,200 – targeted at those who aren’t ready to splurge on bespoke. However, they have found that Royal Bastard isn’t just attracting younger clientele with less in the bank—some of their bespoke clients have also purchased ready-to-wear for every day suiting, while they reserve bespoke for the boardroom.

“Even though you’re buying a Royal Bastard piece, you’re still getting the Lord Willy’s bespoke experience,” insists Alex Wilcox. “Betty will still tweak the hell out of it to make sure it looks perfect—we certainly aren’t treating our clients any differently whether they’re buying ready-to-wear or bespoke.”