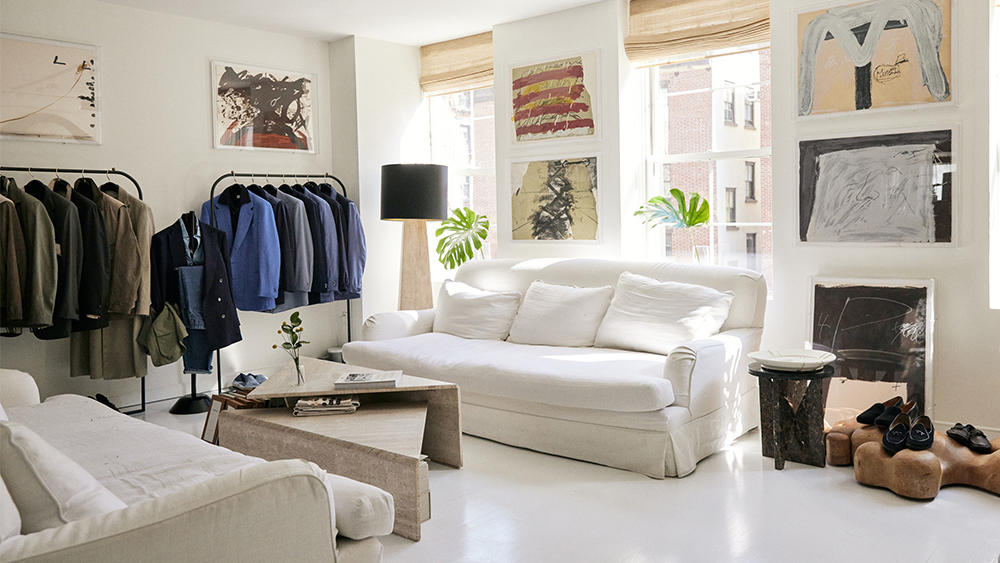 A global pandemic came and receded, and once the dust settled it was clear that we didn’t wish to live in sweatpants for the rest of our lives. As a matter of fact, it’s an exciting time to take an interest in the rarefied world of bespoke, custom and made-to-measure clothing in New York, as the city is awash with local and international artisans, heritage makers working at the top of their craft and young designers putting their own stamp on a centuries-old art.

But first, a note on terminology, as not all personalized tailoring is made at the same level. At the entry point is made-to-measure, which is often made with the same quality and at the same facilities as ready-made clothing but differs in that its pre-set “block” or pattern has been altered to account for a client’s measurements and certain styling preferences, including their choice of fabric. Made-to-measure clothing arrives in near-final form save for the placement of the sleeve buttons but can be additionally altered to better fit the client.

Bespoke, also called “bench made,” represents the other side of the spectrum. Rather than adjusting a factory’s pre-existing templates, a tailor will create an entirely new pattern for the client. This allows for a much fuller range of customizations and fit adjustments over a greater number of fittings, which typically begins with a temporary “basted” fitting held together by string.

That, however, is only the most broadly accepted definition—other considerations, such as whether the pattern is drawn on paper or the garment features additional levels of handmaking will vary by maker. As this suggests, many firms fall somewhere between these two poles and define themselves under the big-tent classification of “custom,” which can be understood as a blend of the two.

Now, whether your next custom commission will be a three-piece suit or a polo shirt, consult the list of makers below.

Named after the constitutional amendment that that prohibited the production of alcohol in the United States, 18th Amendment’s distinct house style is infused by the sartorial signifiers of the Jazz Age and the gregarious personal style of its founder and creative director Angel Ramos. Rather than fitting clients through a set block pattern, the made-to-measure program splits the difference with bespoke by creating a custom pattern for each client based off of 30 body measurements. Once the fabric is cut, the garment is then made according to one of 18th Amendment’s 1930s-inspired house styles. The company also offers its soft-shouldered jackets, high-waisted trousers, knit polos and four-pocket “cigar shirts” made-to-order.

While ownership of the business passed from its titular founder to long-serving associate Jonathan Sigmon in 2020, the house style developed by Flusser over the course of four decades remains. Today, clients can procure its “updated drape” silhouette—marked by a soft, natural shoulder, a fuller chest and a trim waist—through both custom and made-to-measure. Its custom offering is largely handmade in New York City, while made-to-measure garments are finished in its New York City workshop following two fittings. While it may always be most readily associated with Wall Street antagonist Gordon Gekko—who Flusser famously outfitted—the business also offers full bespoke and made-to-measure for women.

International retailer The Armoury maintains two New York locations in Tribeca and the Upper East Side (its Madison Avenue location closed at the end of June 2022; the business is looking to re-establish itself in the neighborhood and will operate from a temporary location there in the meantime). Both shops offer a wide array of bespoke, made-to-measure and made-to-order. Bespoke offerings come from third-party artisans including Liverano & Liverano, Tailor Caid and Pommella Napoli, who regularly visit Armoury locations during trunk shows that allow new clients to place orders. Made-to-measure and made-to-order are both done through the Armoury’s extensive “100 Series” of suits and jackets that are designed in-house and manufactured by Japan’s Ring Jacket; made-to-measure tailoring from Neapolitan maker Orazio Luciano is also available.

Only in its second decade of business, bespoke maker Cad & The Dandy is a Savile Row import whose relative youthfulness is reflected in a deference to client preferences and a rakish “penthouse” showroom perched atop a tailor-filled tower on West 57th street. In comparison to its London brethren, jackets are typified by a softer shoulder and more structured body and can be completed in a much shorter timeframe. A toile fitting typically arrives three weeks after an order is placed, and garments can be finished in five.

From the moment one steps into Frederick Egan Castleberry’s pink-walled, art-filled atelier on Christopher Street, it’s apparent that the designer has created a world of his own—and his made-to-measure clothing is very much an extension of that Wes Anderson-influenced vision. An F.E. Castleberry jacket is marked by soft, natural shoulders, 3⅝” notched lapels and a trio of widely spaced surgeon’s cuffs; meanwhile, trousers are cut on the relaxed side with 2½” turn-ups and jetted off-seam pockets. “Fashion” is sometimes a dirty word in the world of custom tailoring, but at F.E. Castleberry, you’re very much in the designer’s hands.

Huntsman stands out as the first Savile Row bespoke tailor to establish a permanent presence across the pond, having opened its small showroom on West 57th street in 2016. Its high-ceilinged, library-like space hosts an in-house cutter to take client measurements and conduct fittings. Once an order is placed, the garments are made in London according to Huntsman’s equestrian-inspired house style marked by strong shoulders, a defined waist, and a single button stance. At Hunstman, two levels of bespoke are offered: the premium “Bespoke 1849”, which offers access to more exclusive cloths and fabrics from the Huntsman archives, and the standard bespoke that can be completed in a shorter timeline.

J. Mueser merges a downtown sensibility with Neapolitan tailoring at three distinct locations: a second-floor flagship showroom in the West Village, a ready-to-wear haberdashery across the street and a recently opened shop at Rockefeller Center. At each, three varying levels of make are offered. The made-to-order Campania is an unstructured, half-canvassed model made by machine in Naples with a 3/2 roll, patch pockets and a classically Neapolitan barchetta chest pocket. Representing the custom side of the business is the Waverly, which is made in Naples from a hand-drafted pattern and marked by a lightly constructed shoulder. The Mayfair, its bespoke offering, is made in New York and more built up through multiple layers of canvas and a stronger shoulder.

London-born, Savile Row-trained Leonard Logsdail brings over 50 years of tailoring experience to his midtown atelier, which he opened in 1991. While the business has earned attention for outfitting films like The Wolf of Wall Street and American Gangster, Logsdail practices bespoke at a remarkably intimate and traditional level. He personally takes each client’s measurements, drafts their paper pattern and cuts their fabric himself. Afterward, the garments are made locally by a single jacket maker, trouser maker and buttonhole-finisher—each is touched by just four individuals. In addition to bespoke, Logsdail also maintains a made-to-measure offering that is produced in Canada.

Before going solo, Manolo Costa helped launch Paul Stuart’s Phineas Cole line and managed the Purple Label department at the Polo mansion. That inclination for old-world glamour is still expressed at his Upper East Side atelier, which is decorated with art and antiques collected by Costa on his travels—and are available for clients to purchase. His bespoke garments take after American tailoring from the 1920s and ‘30s, with soft, natural shoulders and structured bodies. The clothing is made domestically, and typically completed after eight to 10 weeks with three to four fittings.

Brooklyn’s Martin Greenfield Clothiers carries a unique heritage. Its titular founder was orphaned in the Holocaust before emigrating to the United States and finding work as a floor boy at the factory he came to purchase. As a master tailor, Greenfield went on to make suits for U.S. presidents and productions including Boardwalk Empire and The Great Gatsby, and today the factory bearing his name is the last union shop remaining in the New York area. Clients who wish to engage its custom services can visit the factory’s third floor, where they’ll be fitted for a personal pattern that will be cut on the floor directly above them before being used to make their garments on-site.

New & Lingwood is headquartered on Jermyn street in London but maintains an Upper East Side store with made-to-measure offered on the second floor. In addition to suits and shirting, New & Lingwood also allows clients to order custom-made dressing gowns in fine fabrics including silk and cashmere that will be made directly under its Jermyn street shop.

Paolo Martorano Bespoke was established in 2017 when its founder was just 25 years old, but its quality has attracted some of menswear’s most discerning vets. Martorano practices the bespoke art at its most traditional with custom paper patterns and basted fittings for each garment. Jackets are hand-sewn with hand-padded collars, chests and lapels, and trousers are hand-basted and finished by six hours of manual pressing. The house silhouette embraces classic proportions and can be identified by a natural, lightly padded shoulder with gentle roping at the sleevehead. In addition to traditional tailoring and eveningwear, Martorano also offers bespoke pajamas, gilets, safari jackets and other less formal fare.

Aussie import P. Johnson hosts an airy, third-floor showroom in SoHo where clients are measured to create an individual series of patterns. Afterward, these may be used to make a wide array of formal or casual made-to-measure garments, ranging from suits to shirt jackets to polos. The highest level offerings are produced by P. Johnson’s Tuscan factory Sartoria Carrara and made predominantly by hand. The brand also partners with a Shanghai factory that produces its “Pronto” line made at a lower price point and with a shorter turnaround time, as well as its P. Johnson Femme line of made-to-measure garments for women.

Thom Sweeney’s contemporary approach to British tailoring is represented in Manhattan by a SoHo store that stocks its ready-to-wear line, offers made-to-measure and hosts bespoke trunk shows with its London cutters four times a year. The brand’s made-to-measure offering is available in three models: a modern British construction with a lightweight chest canvas, lightly padded shoulders and a gently roped sleevehead; a softly structured jacket with an Italian-style shoulder construction; and a completely unstructured and unlined make—all of which are made in Italy. Its bespoke is tailored in London following a client’s individual paper pattern and cut with an updated English silhouette that leans trimmer with lightweight chest canvassing and subtler shoulder pads.

Those wishing to engage the Royal Warrant-holding shirtmaker’s custom services in Manhattan will find the bespoke department on the third floor of its Midtown flagship. Within, clients will have the opportunity to select from over 1,000 fabrics, 25 options for collars and cuffs and 20 varieties of monogram, and will have 18 body measurements taken to develop their custom paper pattern.