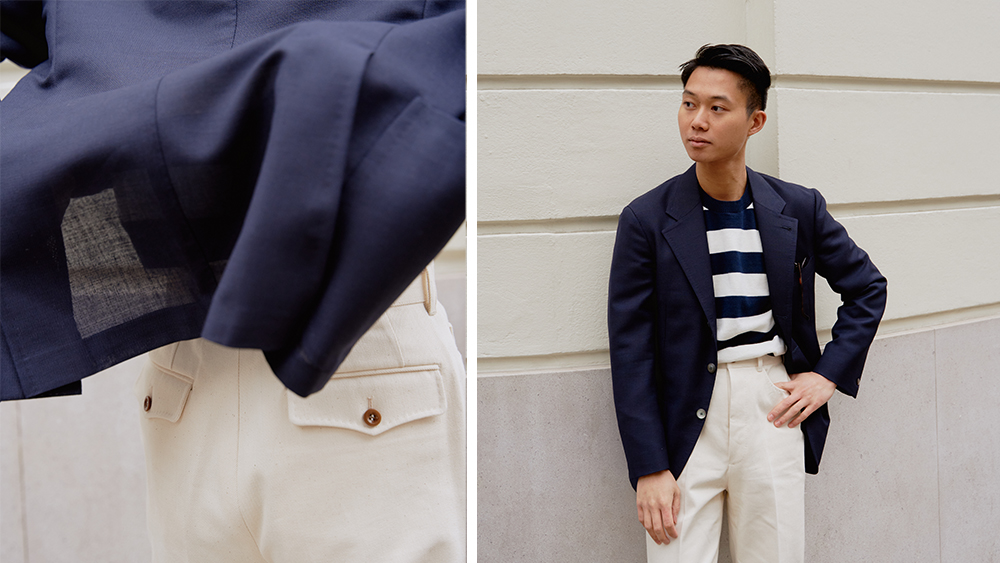 When it comes to tailoring, a certain theory of dress prescribes wool for fall and winter, and lightweight cotton or linen in the warmer months. And while the qualities of those latter two fabrics will doubtless be appreciated during a July heat spike, both are prone to wrinkles, rumples and other factors that might prove charming but take them down a peg in terms of polish.

Wool, however, is a more versatile fabric than it gets credit for and is available in tropical weights or high-twist fabrications that are well-suited to summertime temperatures. Combine that with a lighter jacket construction and it’s possible to look sharp—and feel cool—in wool tailoring year-round.

At the lightest end of the scale is the unconstructed jacket, in which the canvas that typically gives the garment shape is removed, along with its shoulder padding and lining. In keeping with their laidback nature, unconstructed jackets are often made from more casual fabrics. But Sid Mashburn selected a springy, high-twist English wool to make his “Ghost Blazer,” which functions as a classic blue blazer without the stuffing.

“It’s literally just the fabric and the buttons!” Mashburn says of the garment, which has repeatedly sold out. “When you hold it up to the light you can see right through it, and it feels as though you’re hardly wearing anything at all.” Just as important as its airy construction is the fabric itself, which grants it far more versatility than a similarly made garment in a more seasonal fabric. “While we love linen, the Ghost has more range, look-wise,” Mashburn continues. “It can go to almost any occasion, except perhaps the most formal, and it will look just as at home with a polo and jeans.”

Seeking a middle ground between fully unconstructed or constructed jackets, The Anthology has introduced a “Featherweight Blazer” that is given shape by a specially cut piece of canvas that extends only from the shoulder line to the bottom of the lapel.

Details of the Anthology’s Featherweight construction.  The Anthology

“While almost every other unconstructed jacket out there forgoes canvassing entirely, this is where we strive to make a difference as we stay true to our tailoring roots,” says co-founder Buzz Tang. But The Anthology’s innovative canvassing is just half of the story. The blazer, which is half-lined and made with unpadded shoulders, is cut from a wool-mohair hopsack, whose open weave ensures easy ventilation.

“When combined with the Featherweight construction, the breathability is inevitably on par, if not better, than the usual linen and cotton,” Tang says.

However, those that prefer a fully constructed garment aren’t condemned to a summer of sweat-soaked tailoring. As Paolo Martorano of the same-named bespoke tailoring house explains, it’s possible to make a fully canvassed garment in a softer construction.

“For our purposes, the definition of an unconstructed jacket is more correctly termed a softly constructed jacket,” Martorano tells Robb Report. “In crafting such a garment, we would employ a tropical-weight English wool canvas, a horsehair chest cloth, and, significantly, we would forgo the cotton dommette interlining.”

In addition, his “soft” jackets feature minimal shoulder padding, broad stitching directly on the canvas for greater flexibility and shirt sleeve-style spalla camicia shoulders that are attached without the “puckering” that often accompanies this typically Neapolitan feature.

“In general, we tend to advocate for a clean and crisp jacket that never feels uptight,” Martorano continues. “Wrinkled, crumpled or broken-in isn’t really for us—nor our clients.”

There’s a time and a place for linen or seersucker in every man’s life. But if you’re looking to stay cool and collected this summer, know that you’ve got options.