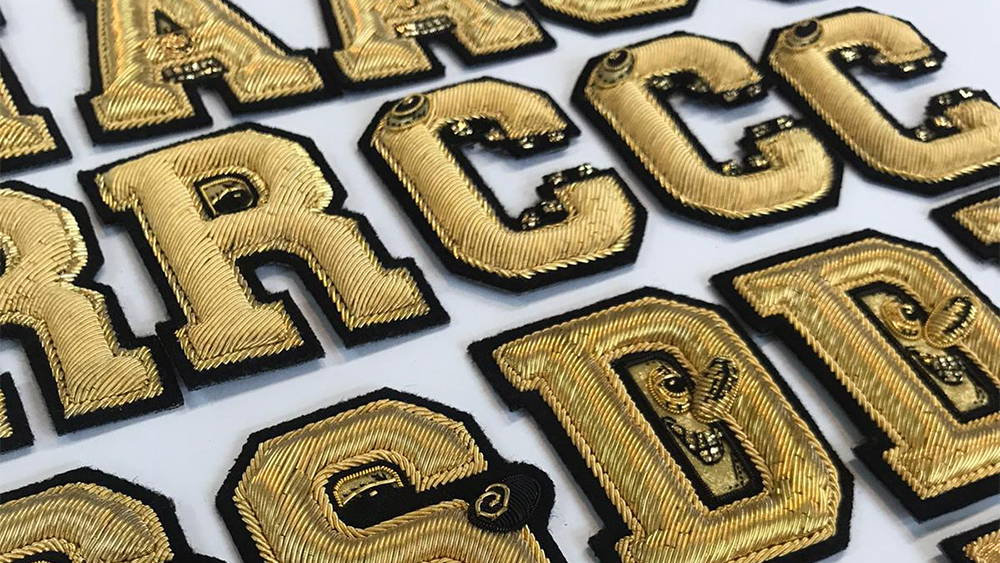 Metal hasn’t had much of a role in the male wardrobe since we ditched suits of armor, but it persists through the art of bullion wire embroidery. This fine technique, which originated in Medieval England as a way to embellish priestly vestments, was later applied to military and ceremonial uniforms as well as blazer crests signifying membership in schools, clubs or army regiments.

More recently, bullion wire embroidery has been utilized by brands like Ralph Lauren to decorate sweaters and has even graced the “dad hat” thanks to Rowing Blazers. Among the foremost practitioners of the art today is London’s Hand & Lock, which was established in 1767 and has embroidered for the British royal family, the British Armed Forces and European fashion houses, and continues to offer custom embroidery for private clients.

Hand & Lock production director Jennifer Pile understands why this centuries-old method of decoration remains attractive. “Originally it was used to signify your status: the more gold embroidery you had, the more important you were,” she says, adding that it gave men of the cloth an “ethereal” appearance during services. “Today, it does not speak the same language as it used to. However, it is still very impressive to look at.”

But just what is it? Bullion wire is an embroidery material made entirely from metal and a small portion of gold. Despite also being referred to as “goldwork,” actual gold bullion accounts for a trace amount of its material. Pile says that traditionally the number would have been 2 percent, but it’s more common today for bullion wire to be made from a mixture of white metals and 0.01 percent gold called “gilt.”

To utilize bullion wire, embroiderers cut the tightly spun coil into small pieces that are then stitched onto the top of fabric. Pile compares the process to beadwork, while noting that bullion wire is “far more manipulative and can create detailed patterns and designs.”

One thing you don’t want to do with bullion wire is throw it in the washing machine. Instead, Pile recommends having this resilient decoration dry-cleaned. And when stored, ensure that the garment is kept in a cool, dry place away from moisture.

“It can last years,” Jones says of bullion wire’s longevity. “Pieces that were made in the Middle Ages still exist today. It’s all about how you look after it.”

One area where bullion wire remains particularly relevant is in the decoration of smoking slippers, and is presently utilized by labels including Arthur Sleep, Stubbs & Wootton, Barker Black and F.E. Castleberry.

“They are simultaneously formal and relaxed,” designer Fred Castleberry says of the bullion-embroidered slipper’s appeal. “Our proclivity for bullion wire is entwined with my love of tradition, specifically that of the English.”

Castleberry also notes that, over time, the flex of the foot may have an impact on the embroidery’s appearance. “Not long after breaking them in, the antiqued bullion wire enters into a season of what we’ve come to appreciate as ‘pleasing decay,’ a term even more aptly fitted to describe English country homes.”

But in the designer’s view, such decay is a cause for celebration, not alarm. “The wire surrenders to the crease of the vamp over time. Not unlike marking your height on the doorframe as a child, this is to be worn as a badge of honor—embraced.”

Whether bullion wire appears in your wardrobe on a blazer crest, a cotton twill cap, or a much-loved pair of slippers, we trust you’ll wear—and care—for that badge of honor with pride.