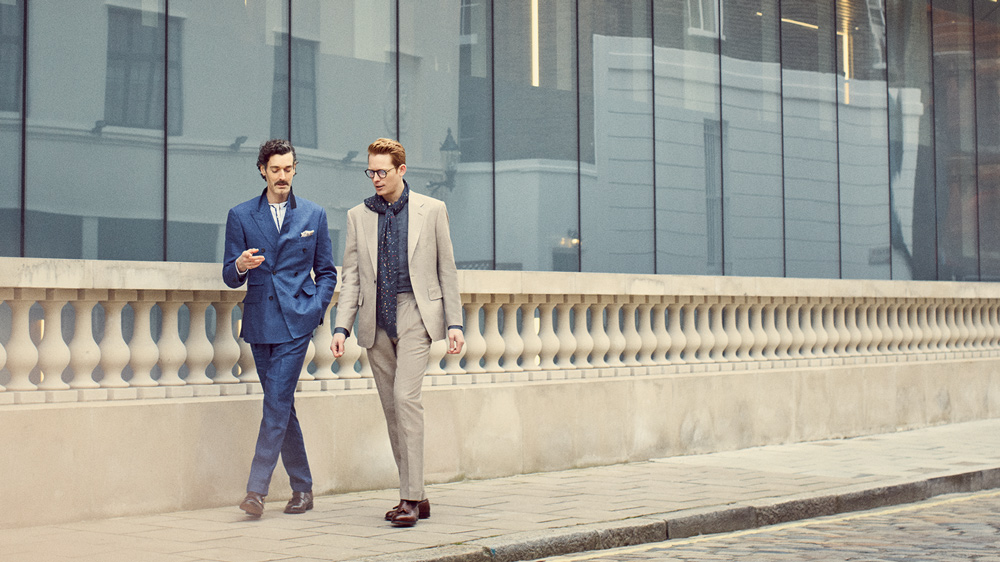 It’s often quoted that a bespoke two-piece suit absorbs upward of 80 hours of work, a combined time that involves the tailor, a cutter, and possibly another chap who specializes in trousers. A tailor’s apprentice will study for five years before qualifying as a coat maker (the “coat” being what tailors call jackets; “only potatoes have jackets,” they’ll tell you), and the Savile Row Bespoke trade association has very particular stipulations for what passes muster, from hand-stitching the trouser y to hand-easing a jacket’s armholes for comfort. A bespoke suit has always been the product of a very traditional set of skills—the expression of a craftsman’s hand and eye.

The last 18 months have seen a shift in the hallowed halls of European tailoring. More and more thoroughbred tailoring houses, those with the weight of history and reputation behind them, are experimenting with new technology—from laser cutting patterns overseas to taking measurements using scanners—and finding ways to elevate machine-made tailoring into something that many fear gives conventional bespoke a run for its euros. Some argue this is the natural way forward, an institution adapting to the modern world. Others decry it as blasphemy.

To Anda Rowland, doyenne of Savile Row and vice chairman of bespoke tailoring house Anderson & Sheppard, the integrity of a handmade suit is unimpeachable. “Our suits represent a timeless bespoke style: cut with rich drape across the chest and with a fuller sleeve set into a small armhole for comfort. To replicate work like this in a made-to-measure garment is impossible. A made-to-measure suit is a customized version of a ready-to-wear suit. It’s made in a factory, often using the same industrial techniques as in ready-to-wear tailoring.”

But should these services be dismissed so readily? Across London, Chiltern Street tailor English Cut has developed a concept called the MTM Code, which offers different levels of customization, ranging from basic made-to-measure (MTM 1) to MTM 3, where a customer has measurements taken in-house that are then dispatched to a laser-cutting workshop in Japan. There, high-end technology is used to draft and manipulate the pattern—something that’s only recently become possible—and is later padded and finished by hand back in-house. The result has been mixed—some customers report a cutting-edge robot-made suit that’s true to English Cut’s house style; others state that the it has been off, requiring a number of alterations to correct.

The house’s head coat maker, Paul Griffiths, believes the MTM Code fills an obvious gap in the market. “We think the combination of laser cutting and old-world artisanship sets it apart from other ‘scan-and-make’ processes,” he says. Certainly, the process, while not necessarily quicker than conventional bespoke (as with Savile Row, English Cut’s MTM Code suits take between three to eight weeks to make), does come in at around two-thirds of the cost.

What of these other scan-and-make processes? One, Tailor Made London, has “disruptor” written all over it. The brand’s founder, John Buni, set out to create customized suits using a 3-D body scanner, which does the job of a bespoke cutter (who’s responsible for measuring clients at the start of the bespoke process) in a fraction of the time. “The scanner allows us to speed up and streamline our service,” he explains. “We can get thousands of precise measurements in just 10 seconds and a 3-D body render that gives an accurate depiction of the customer’s posture, removing the need for multiple fittings. This then allows us to make the suit in as little as four weeks, as opposed to the eight weeks you can expect to wait if you order on Savile Row.”

On paper, that’s impressive, but does a service like this risk de-skilling the tailoring process and removing any sense of tradition? Master Parisian tailor Lorenzo Cifonelli is one of many sartorialists who view developments like Tailor Made as inferior. “Cifonelli has always tried to foster the artisanal spirit of bespoke,” he says. “Measurements are only the start of what we do. We treat every customer as a model to express our creativity. This approach can only be developed through a close relationship with the client and is the result of long experience.”

Perhaps—but what if robots could acquire the kind of experience that Cifonelli believes sets him apart? Outside of the clothing industry, experiments are underway to link robots with AI systems to help them learn human processes and improve their work over time. Robotics expert Chris Middleton explains, “Artificial intelligence can certainly learn to do things that humans are doing very quickly. Just recently, a robot hand connected to a machine-learning system taught itself to manipulate a wooden block. It was able to cram in about 100 human years of self-teaching in 50 hours. It taught itself virtually before it tried to manipulate the block physically.”

Theoretically, it’s possible then to teach that same robot hand to handle shears or a needle and thread with the same technology. But even so, Middleton thinks that’s a ways o yet. “There are a lot of processes that humans can handle instinctively that would take robots years to learn,” he says. “For example, how different cloths drape on the body. It would take a huge amount of human time and effort to create a program that taught robots how different fabrics behave.”

This rings true elsewhere in the luxury manufacturing sector, too. Ken Stewart, chief strategy officer at Karma Automotive, says, “Robotics are best applied when they’re ergonomically helpful for a human worker—if a part is too heavy or the process involves a repeat motion, and so on. But there are many operations where we’d never use a robot because the human touch
or eye can’t be replicated. We use a lot of luxury leathers in our interiors, for example, and lining interiors is more of an art than a science.”

Back in the tailoring world, even the most successful machine-made bespoke services are evolving slowly. Dominic Sebag-Monteore, cutter and creative director at Edward Sexton, has spent years developing an O shore Bespoke service, which offers clients their own Sexton pattern cut in-house. It’s then made up in a specialist workshop overseas, yielding a bespoke suit that is largely constructed by machine. The service has been a hit with customers, but the director’s under no illusion as to its limits.

“In-house, we create clothes with a team of tailors who work side by side. We’re constantly assessing the best way to achieve what the customer wants; different tailors change their methods depending on a customer’s requirements,” Sebag-Monteore says. “Our O shore Bespoke service allows clients to access a bespoke product for almost half the cost of our handmade suits, but you don’t get the same degree of control with a robot.”

That’s not to say things won’t change in a few years’ time. Karma’s Stewart says, “Right now, we find that AI is best used to process data that isn’t learning-related. It’s not like robots are teaching themselves to install parts better over time—there’s not much of that yet. Could there be in the future? Certainly. Learning methodologies are developing to allow robots to do this, but it’s not widely done at this point.”

That’s one barrier to robot bespoke, but more to the point, robotics expert Middleton thinks increased automation in menswear manufacturing will only strengthen the demand for handmade bespoke tailoring in the long term. “It’s like the vinyl market,” he says. “The more things are auto- mated or digitized, the more a certain consumer will value something that’s analog. This isn’t an either/or scenario. There will always be both machine-made clothes and clothes made by hand— and I think that’s a good thing.”

We’re approaching a watershed in traditional tailoring. New technology is democratizing the market, and today a “bespoke” suit can be many things. In the next decade, it’ll be down to each individual craftsman and client to decide the future of bespoke tailoring. Make no mistake—the robots are coming. But for those who take pleasure in the skill and craft of handmade garments, thankfully they’re not quite here yet.