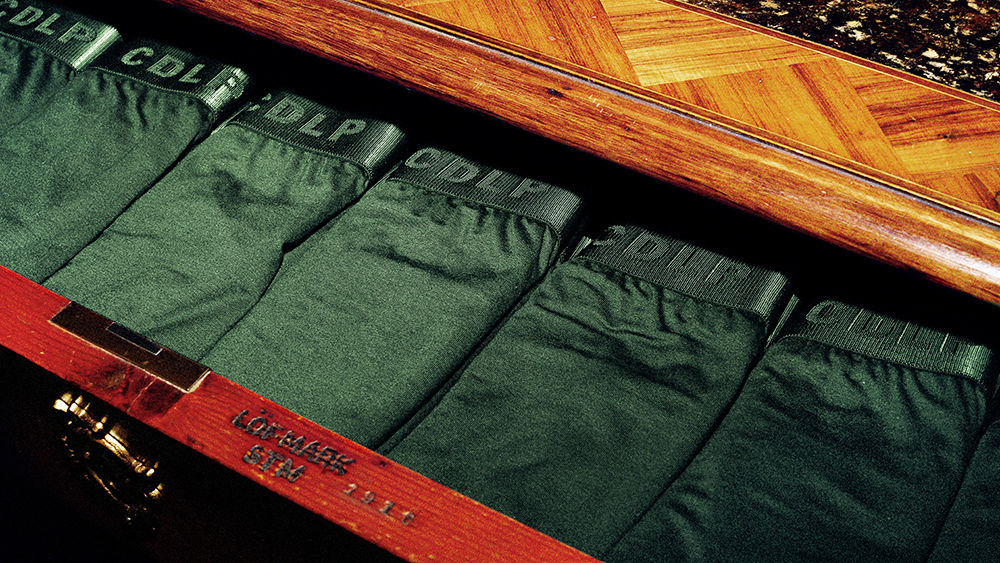 Basic has become something of a dirty word in our current culture. Certainly, it’s not a desirable descriptor for one’s wardrobe. But there are certain wardrobe essentials, chiefly underwear, that are an inescapable part of everyday life. Even among the most style-conscious men, underwear remains, well, elemental at best. You may be discerning about your suit and shoes, but what about the skivvies and socks beneath them? Swedish brand CDLP is raising the bar on men’s underpinnings, creating elegant, grown-up essentials on par with the rest of one’s thoughtfully-outfitted wardrobe. These are basics worth coveting.

The brand was founded in Stockholm in 2016 by Andreas Palm and Christian Larson, best friends since their first meeting in business school. Larson wound up ditching the number-crunching to become a successful filmmaker and photographer. While shooting a lingerie campaign for Agent Provocateur, he had a realization about how uniformly lackluster the world of men’s underwear was. “I got jealous—really,” Larson recalls. “Women have this much more exciting world, this ritual of choosing undergarments based on occasion or mood or feeling. Whereas men have usually always looked at underwear as a necessity; they wear the same thing whether they’re going on a date or working out or anything in between.”

Like the rest of its lineup, CDLP’s boxer brief eschews overt branding; its products ship in an attractive bright yellow box.  CDLP

And usually, that same thing is usually unremarkable, if not cringe-worthy. As friends who often travel together and share hotel rooms, the two wound up seeing a fair share of each other’s undies. “We basically turned to each other and said ‘What the fuck are you wearing?’” Palm remembers. After one particularly laughable pair of “these Muchachomalo’s with a huge logo and some horrific pattern in lime green,” they decided to make something that better reflected their style. “Our mission was to elevate it from a necessity to a garment you choose,” says Larson, “to give men that choice in their morning ritual.”

Beyond a better aesthetic, they want to create shorts that surpassed the quality and performance of what was available. Their research found that around 80 percent of all men’s underwear on the market is produced in the same region of China using low-grade cotton. CDLP landed on a family-owned, third-generation factory in Portugal (which has been a powerhouse in textiles for centuries) and, rather than standard cotton, they opted for Lyocell: a silky-soft fabric derived from wood pulp. While Lyocell’s sustainable edge is attractive, it won out because of its naturally superior moisture-wicking and anti-bacterial properties and ability to hold its shape and color.

The brand launched with the boxer trunk ($33), a trimmer, more tailored alternative to a traditional boxer brief, which continues to be a best-seller. It quickly added the aforementioned boxer brief ($33), a classic y-brief ($29), and a looser boxer ($39), all of which are now available in black, white, navy, army green and an especially attractive shade of burgundy. Their beauty is in their Scandi-minimalism, free from loud prints or overt branding. The subtle sheen of the tonal waistband is sexy without trying. But really, every element of CDLP is sexy, from the campaign photography (all of which is shot by Larson and features friends of the founders rather than models) to the packaging (a luxurious yellow box that maybe even chicer than Hermès’ ubiquitous orange vessels).

Having incorporated several pairs of CDLP’s into my own underwear drawer, I can attest to their appeal. The lyocell has the softness of the very finest Sea Island cotton but is notably lighter; it feels like wearing nothing at all. The main complaint I’ve always had with my underpants—that they inevitably get stretched out and frayed—hasn’t been an issue with my CDLPs after a year of wearing and washing.

After making swimwear, underwear and socks, CDLP is turning its attention to luxurious loungewear.  CDLP

It didn’t take long for the brand to convert other guys to the school of better basics. They’ve had customers buy an entire wardrobe of underpants and will soon launch Automatique, a subscription service that delivers a fresh batch of undies at an interval of your choosing. Indeed, being greeted by the Marie Kondo-esque purity of a CDLP-exclusive underwear drawer every morning is a very enticing prospect. “We can see a behavior change in men buying occasional underwear,” says Palm. Larson adds: “We’ve always promoted the idea of having an underwear collection and now we see that our customer is buying a range of styles…they’re not just a briefs guy or a boxer guy or a boxer brief guy.”

Since they’ve expanded into socks, swimwear, long-johns and, most recently, t-shirts—all made with the same standard for quality textiles and understated cool—CDLP is making easy work of elevating one’s everyday staples. Next, they’re tackling traditionally schlubby sweats and pajamas.

“There are a lot of brands working with loungewear, but it often feels like dressing down,” says Larson. “We always want CDLP to feel like you’re dressing up.” Looking sharp even while loafing? That’s the kind of basic every man can be proud of.