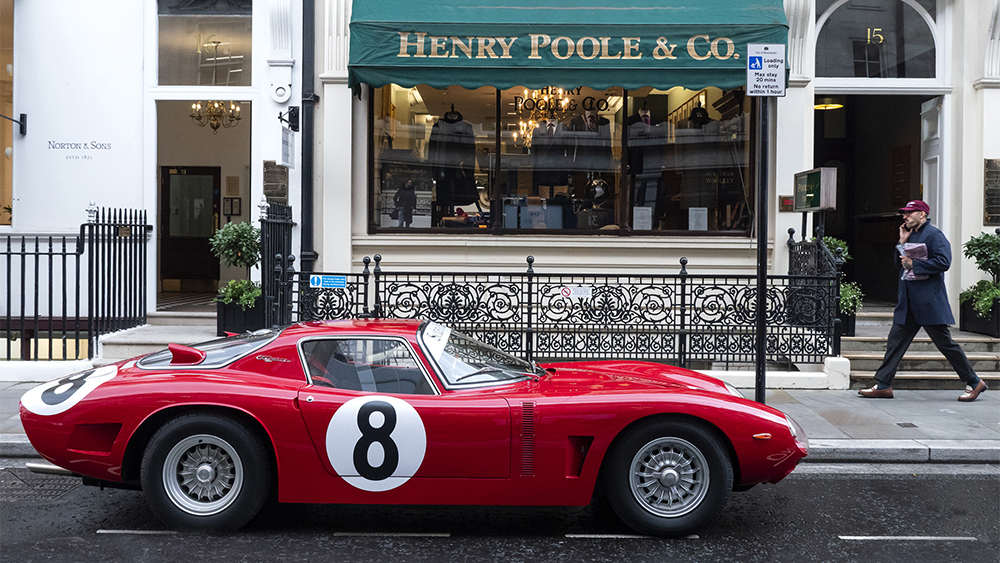 For centuries, Savile Row has served as the heart of British bespoke tailoring. But on June 15 and 16, the legendary street will become one of the world’s most rarefied parking lots. That’s thanks to Concours on Savile Row, a two-day event merging the worlds of bespoke clothing and luxury automobiles through displays, talks, and exhibitions pairing tailoring houses to automakers.

“The two worlds of luxury automotive and bespoke tailoring have a long history of parallels and partnerships,” says Julian Stocks, property director for the Pollen Estate, which owns much of the Row’s property and is producing the event in collaboration with Hot House Media, a media and event company focused on the classic and collectible car world. “Concours acts as a celebration of craftsmanship and bespoke across both industries and is a wonderful opportunity to bring visitors together against a one-of-a-kind backdrop.”

For starters, the Mayfair street—which, in a historic first, is closed to traffic for the duration of the event—is hosting more than 40 vehicles, including classic autos on loan from private collections and new models from contemporary makers. The vintage line-up includes the Jaguar 1964 E-Type coupe used in the Kingsman films, a Jaguar XK120 owned by male model David Gandy, and the first and last Ferraris purchased by Fiat chairman and Huntsman client Gianni Agnelli (a 1950 166MM Barchetta and a 1986 Ferrari Testarossa Spider, respectively). On the more modern side, attendees will be able to spot the 2022 Maserati MC20, the new Healey by Caton and the UK debut of the 2022 Czinger 21C.

Through its duration, a central stage will host talks from A-list figures representing both sides of the event, including a Q&A with Hackett co-founder Jeremy Hackett and a conversation with six-times Le Mans winner Jacky Ickx (who himself is having a jacket made by Row resident Cad & The Dandy).

John Wells of Morgan Motor Company and William Skinner of Dege & Skinner in front of their collaborative Super 3.  Andy Barnham

But what makes the free-to-attend event truly remarkable—and ensures that it could only happen on Savile Row—is a number of exhibitions partnering the Row’s inhabitants with auto manufacturers. These include a partnership between Dege & Skinner and the Morgan Motor Company, which sees the former customize the interior door panels of the latter’s Super 3 model with a British racing green wool mesh, also being used to make a single-breasted jacket for Morgan Motor Company head of design Jonathan Wells.

Other pairings include Scabal and Caton, Huntsman and Bentley, J.P. Hackett and Aston Martin, Holland & Sherry and Bizzarrini. In each case, the maker’s vehicle will be parked outside the tailor’s premises and accompanied by exhibitions and displays touting the craftsmanship that goes into each party’s products, such as a live cutting demo by Huntsman or an upholstery demonstration by Holland & Sherry.

Details of the Hunstman upholstered interior of a Bentley Bentayga.  Huntsman

“There are existing historical links between some of the houses and some of the manufacturers,” says Hothouse Media managing director Geoff Love, citing previous relationships between Aston Martin and Jeremy Hackett as well as Hunstman and Bentley. “Just trying to match the right tailors with the right manufacturers has been a very interesting process.”

At the time of writing, Concours on Savile Row is a one-off. But based on the event’s reception, Love hints that it might take a second lap. “I think if we can pull it off in year one, there will be a lot of support from the tailors, the manufacturers, the sponsors to move forward,” he says.