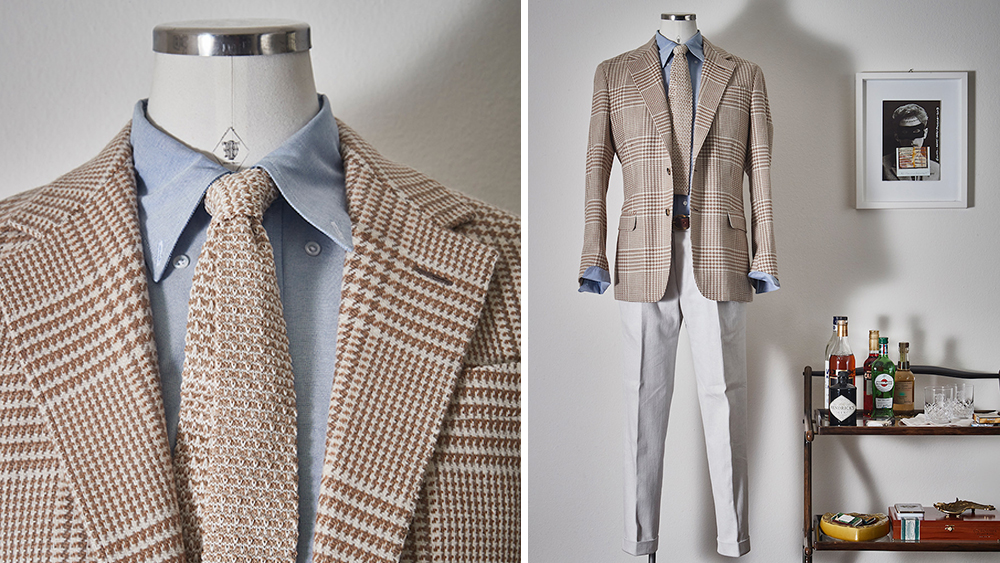 The distinct style of Italian industrialist Gianni Agnelli will be instantly recognizable to anyone who’s ever skimmed a menswear blog or spoken the word sprezzatura without irony. And while much has been said about how to mimic the Fiat chairman’s moves—from pairing hiking boots with flannel suits to wearing wristwatches over shirt cuffs—designer Denis Frison has gone one step further and recreated an iconic piece from the wardrobe of the man they called L’Avvocato (“The Attorney”).

Frison’s Avvocato jacket is based on a much-shared photo of Agnelli observing a match at Turin’s football stadium in which he wears a beige-colored Prince of Wales tweed jacket with a Brooks Brothers shirt, wool tie, tan trousers and hiking boots. The photo has long served as an inspiration to Frison, who considers Agnelli something of a muse (and counts his grandson Lapo Elkann as a client).

“Agnelli inspired my whole career in design,” Frison tells Robb Report. “It’s inspired by Italian gentlemen from the ‘70s and ‘80s. And Gianni Agnelli was the best testament of that era.”

So, when Frison was introduced to the owners of Italian fabric mill Tollegno 1900, he leaped at the chance to revive one of Agnelli’s most revered looks. Using the photo as a model, Frison partnered with the 121-year-old mill to produce an exclusive fabric in the same large-scale pattern and beige-and-white tones as Agnelli’s favorite.

The recreation is made from a winter weight wool that’s typically used in knitwear rather than jacketing, which Frison notes gives the 100 percent wool fabric the softness of cashmere. While he initially intended it for use only in bespoke projects, the designer has utilized the textile in a made-to-order jacket that borrows its details from the original: notched lapels, flap pockets and a two-button closure.

While the jacket is styled a la Agnelli online with an OCBD and knit tie, Frison says he also enjoys wearing it with a pair of distressed Levi’s 501s, a Wrangler shirt and either moccasins or suede loafers. “That’s, for me, one of the best expressions of that jacket,” he says. But if he’s feeling a bit dressier, Frison adds that he will pair it to pleated flannel trousers and a grey knit tie.

The exclusive fabric is also available for bespoke commissions, which afford the opportunity to deviate from its source material. Under those conditions, Frison is partial toward using it to make a double-breasted jacket, or his label’s more casual hunting jacket. Whether the fabric is used to make a faithful Avvocato jacket or something custom, it’s worth asking why we’re still talking about Agnelli’s style all these years later.

“Let’s put it this way,” says Frison. “It’s like a blue flannel suit or a Ferrari from 1970—you never get bored, and they never get old. It’s something that you always pursue, and that you always want in your wardrobe or in your garage. Gianni Agnelli is the exact expression of that Italian elegance.”

Frison can’t help you score that vintage Ferrari—but he can supply you with the closest thing to raiding L’Avvocato’s wardrobe.