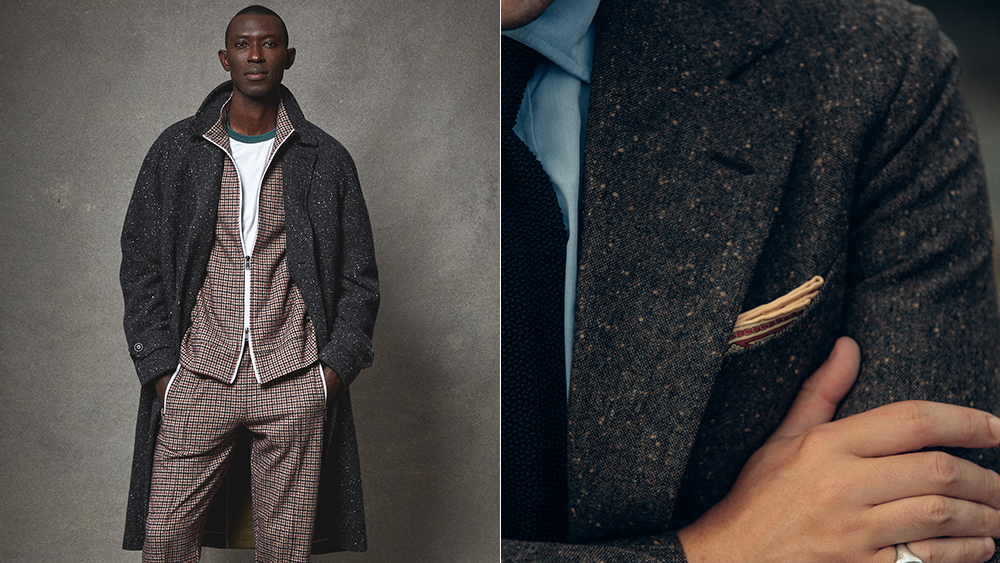 Like the distinctive flecks responsible for its trademark appearance, Donegal tweed seems to be popping up everywhere this season, from major retailers like Todd Snyder and J. Crew to custom makers including J. Mueser and Articles of Style. To understand how the woolen equivalent to confetti cake came to be—and what might be considered a Donegal fabric in the first place—we approached Paul Walker, founder of the Edinburgh-based tweed emporium Walker Slater.

As Walker explained, the term Donegal is not used exclusively for wool, but may refer to any plain weave cloth speckled by “neps” or “slubs” of differently colored yarns woven into the cloth at random intervals. So while his business sells Donegal jackets and waistcoats made from Shetland tweed, it also carries similar styles in a Donegal-flecked blend of wool, silk and linen.

“Rather than a particular type of wool, our Donegal items are so-called in reference to their pattern,” he tells Robb Report.

However, there was a time when it referred to a single type of wool made in a specific place. It originated in Ireland’s County Donegal as a handwoven tweed that paid tribute to the local surroundings.

“The flecking allowed weavers to reproduce their source of inspiration: the natural beauty of the Irish landscape,” Walker says. “Natural dyes made from berries and other plants allowed weavers to recreate the land, forming a natural symbiosis between the weaver, the cloth and their environment.”

Of course, the aesthetic came to be appreciated by those who’d never set foot on the Emerald Isle, let alone County Donegal.

“From an aesthetic perspective I believe Donegal patterns look very elegant as they break up a monochromatic plain weave and put a point of interest in the cloth,” Walker says. “Our Donegals tend to be very subtle in terms of contrasting flecks, but the principle is there that makes them a Donegal pattern.”

Unlike Harris tweed, whose place of origin and production methods are designated by an act of parliament, the use of “Donegal” is not bound by geography or fabric type. Todd Snyder sources the Donegal wool blend used in its Madison suit jacket and trousers from the Tessuti di Sondrio mill in the Italian alps.

“Tucked away in the heart of the Alps, this family-run business is one of Italy’s most revered producers of Donegal wool and a number of fabrics used in our collections,” Snyder tells Robb Report. “They have really perfected an attention to detail and quality that is unmatched.”

In the designer’s thinking, the fabric’s appeal lies in its versatility.

“The great thing about Donegal wool is that it offers a texture and certain tweedy sophistication that is perfect for a number of menswear staples—it’s also perfect for cool weather,” Snyder says.

West Village atelier J. Mueser offers its Neapolitan-made Waverley jacket and trousers in a lightweight Donegal tweed; the brown and olive iterations were milled in Italy, while the navy was woven in County Donegal (the label is also developing a proprietary Donegal tweed that will be woven in its place of origin with a touch of cashmere).

“It’s an interesting dichotomy to pair such soft tailoring with what would typically be a more robust cloth,” J. Mueser editorial director Chase Winfrey says of the jackets, which are softly canvassed, quarter-lined and left unpadded in the shoulder.

“Broadly speaking, wardrobes are becoming more casual. That’s not to be confused with ‘less tailored.’ People are turning to more interesting textiles. Chunky cotton corduroy, crisp wool frescos, and yes speckled Donegal tweeds. Things that are interesting, and above all, fun!”

Fun—that would be one more thing that Donegal tweed and confetti cake have in common.