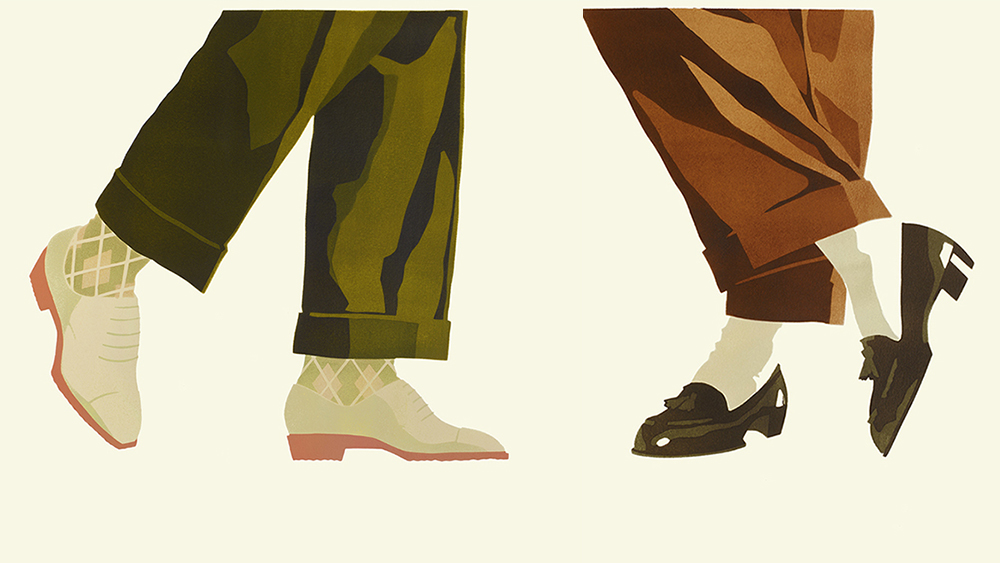 By its very definition, a “golden age” belongs to the past. But why not let the present get in on the fun, too? That sentiment may summarize the budding career of Fab Gorjian, a London-based artist whose hand-painted work evokes the Art Deco elegance of illustrated advertisements from the 1920s through 1950s. And like many of those artists who inspire him, Gorjian’s focus lies in the world of classical menswear.

Gorjian, who dates the beginning of his career to scribbling in his father’s passport at age two, has long walked the creative path. He studied everything from animation to set and costume design during his university years, but always returned to drawing and painting. He cites the stylized Gotham of the 1990s cartoon Batman: The Animated Series as his introduction to the Art Deco style, which he further appreciated in vintage posters and advertisements from the interwar period.

“British travel posters and tailoring, European packaging and patterns, American objects and furniture—all of those give me endless inspiration,” he says. “I sit every day and look through my books and catalogues, and always come away with a real desire to add my own work to it all.”

Gorjian’s professional introduction to the menswear world occurred while pursuing another artform. After becoming “mysteriously obsessed” with shoemaking, he found work creating patinas for George Cleverley and John Lobb.

“I would take home very old and valuable samples and recreate their patina on a brand-new pair. That was great fun, and I found it quite natural because of my background in painting,” Gorjian says. By 2018, he had taken his talents to The Jaunty Flaneur, an artisan shoe polish service located within the Savile Row shop of bespoke tailor Cad & The Dandy. Soon, life on the Row gave Gorjian his artistic subject matter.

“Meeting tailors, people starting their own brands, cloth merchants, shoemakers and so many who live and breathe menswear not only led to my first commissions, but also led to me committing to the interwar theme I had wanted to explore for so long,” he says. “So really, I found my own art at the same time I found my clients.”

Gorjian accepted his first commission in 2019 and has since produced work for UK-based clients including Rampley & Co, Fox Brothers, Anglo-Italian and Gownsmith, as well as makers abroad like Paolo Martorano Bespoke. He credits attention to detail as a factor in his success, noting that he would consult with makers and designers to ensure his art portrayed clothing accurately.

“In the end, I reduce everything to bold, flat shapes and colors, but there is a huge difference between the drape of an unconstructed jacket and a constructed one, so it’s important that I express those differences with an extra ripple of cloth here, or a straighter line there,” he says.

Today, Gorjian works as an illustrator full-time. He says his commercial commissions, which have remained focused on menswear, comprise about half of his work, with the rest coming from private commissions including portraits. In January, he launched an online store to sell his work as high-quality giclee prints on museum-grade paper.

Ultimately, Gorjian believes the style expressed through his work is something he was conscious of since day one, but it took an unlikely journey through Savile Row to make the pieces fall into place.

“I suppose I didn’t develop it so much as I slowly learned to listen to myself, and to just express what I wanted to express,” Gorjian says. “The ingredient I was missing was classic tailoring and style. When that entered my life, I really felt I had something to say.”