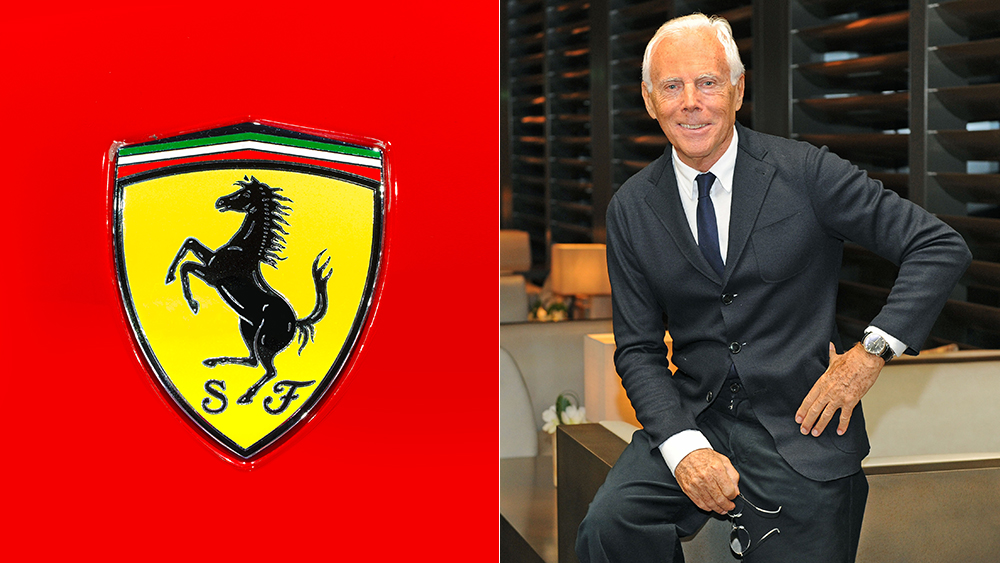 Italians really do some things better. And because designing both covetable sportscars and enviable clothing cars definitely fall under that umbrella,  it’s only natural that two of the nation’s titans would team up. Enter a newly announced partnership between Ferrari and Giorgio Armani.

Unveiled today by Ferrari CEO Louis Camilleri, the collaboration is part of the luxury carmaker’s long-term plan to extend its reach well beyond the race track. Camilleri told analysts it is a company goal to make 10 percent of its earnings (before interest and taxes) come from three new lifestyle pillars––apparel, luxury services and entertainment––within the next seven to 10 years.

“This is not just about profit,” Camilleri said, according to The Associated Press. “This is about enhancing our brand equity and the vitality and vibrancy of the brand.”

Camilleri, formerly CEO of Philip Morris International, joined the company in July of 2018 and has already seen the successful marque grow under his watch. To ensure that success continues, the new business strategy involves slashing its licenses in half and cutting a third of the product categories currently sold. Roughly $892 million worth of products on the market bear the Ferrari name, a pool of capital Camilleri hopes to control more tightly.

Though there hasn’t been any indication of what Armani’s creations for Ferrari will look like, the fashion house is no stranger to functional athletic gear. In the past, Armani has dressed runners and the Italian national soccer team. What we do know is that the clothes will be produced by Armani in Italy with a multi-year commitment agreed to by both companies.

The entertainment component of Ferrari’s new direction will include additions to ways customers can experience the brand. It already has theme parks on Abu Dhabi and Barcelona, along with two Italian museums, and will add Formula 1 driving simulation centers for fans who can’t make it to a track for a test drive. Luxury services will include a new restaurant, helped by acclaimed Italian superchef Massimo Bottura, located at Ferrari headquarters in Maranello.