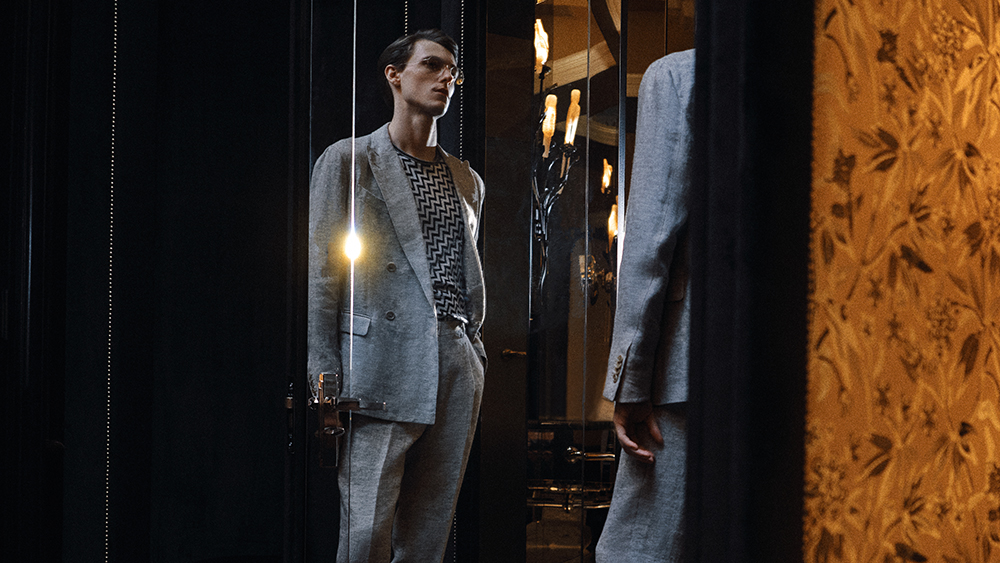 Over the last year-and-change, we’ve seen sport coats and ties beat a hasty retreat, replaced by chore coats and safari jackets. If tailoring should make a comeback, it seems odd that it would be in the form of the more grandiose double-breasted jacket. However, the recent slate of DBs we’re seeing everywhere from Paul Stuart to Fear of God share a crucial distinction: two fewer buttons. The four-button double-breasted jacket—also referred to as a 4×2 or a 4×1, depending on its button placement and fastening—has re-emerged at a moment when the very nature of tailored clothing seems up for grabs.

If you haven’t checked in on the four-button in a while, you may still associate it most closely with 1980’s American Gigolo, which saw Richard Gere don an oversized camelhair number while debonairly contesting a murder accusation. And indeed, that Armani-era romance still hangs over the jacket: so much so that in March, Mr Porter produced a capsule collection with Giorgio Armani that featured several 4×1 jackets (but none in camelhair, alas).

The stylings of American Gigolo seem to have influenced Fear of God (which, like the film, is based in Los Angeles), whose 4×1 California Blazer calls back to Gere’s character with a roomy fit and a generous length. However, it strikes a contemporary chord with its fabric: a viscose-crepe that seems more at home over a crewneck than a shirt-and-tie (indeed, the brand suggests that it be worn as outerwear).

Across the pond, where the double-breasted blazer first originated with the Royal Navy and has a long history cloaking male members of the royal family, the four-button variant is also getting a new, more relaxed reevaluation. One example comes from Drake’s, which in June introduced a casually cut 4×2 model made from Italian linen.

“The double-breasted jacket is a bona fide staple of any British wardrobe, and while most incarnations are quite firmly embedded in the rigid, military style,” Drake’s creative director Michael Hill tells Robb Report that his looser interpretation highlights “the adaptable and slouchy aspects of this style.”

In particular, Hill calls attention to the style’s “less-cluttered” button stance and slightly bellied lapel, which allow it to be worn informally over casual kit. “Rather than the connotations of uniform sometimes associated with the double-breasted blazer, the Drake’s DB presents a more relaxed and straight-forward style suited to natural tailoring,” he says.

London label Anglo-Italian has made its own contribution to the four-button fold, inspired by the soft tailoring worn to early 20th-century sporting events. Its appropriately named Tennis Blazer is made from undyed and untreated Italian linen, and cut more like outerwear with an oversized fit, an unvented back and side adjusters.

“The inspiration comes from a recent vintage dive, where I stumbled across old sporting blazers from the ’30s and ’40s,” says Anglo-Italian co-founder Jake Grantham. “I was struck by how lightly constructed they were. No canvas, no padding, made to be more robust. Paired with fuller silhouettes and sporting attire, it’s something that makes sense in 2021’s casual approach to dressing.”

While Drake’s and Anglo-Italian have opted to take out much of the stuffing with their softly tailored iterations, The Anthology has opted for a more classical take. Its 4×1 double-breasted model, which was introduced in July and is only available bespoke at the maker’s Hong Kong and Taipei showrooms, is every bit as structured as its house-signature 6×2 but effects a far different feel by virtue of its distinct button stance and cut.

The Anthology’s signature 6×2 jacket and its newer, more irreverent 4×1 iteration.  The Anthology

“Even when buttoned-up, it feels like it’s constantly half-opened because of the V-zone,” says Anthology co-founder Buzz Tang, in reference to the long lapel line created by its lowered buttons. “The configuration features a very unique but challenging proportion. Distinctive, idiosyncratic, slightly rebellious—as if a classicist has gone rogue. It feels more suitable for a creative soul.”

Tailoring isn’t going away post-corona, but it may be worn more by choice than by uniform.  And whether it’s donned to level-up denim and a tee or finish off a fully tailored ensemble, the delightfully different four-button DB seems the right jacket for the job.