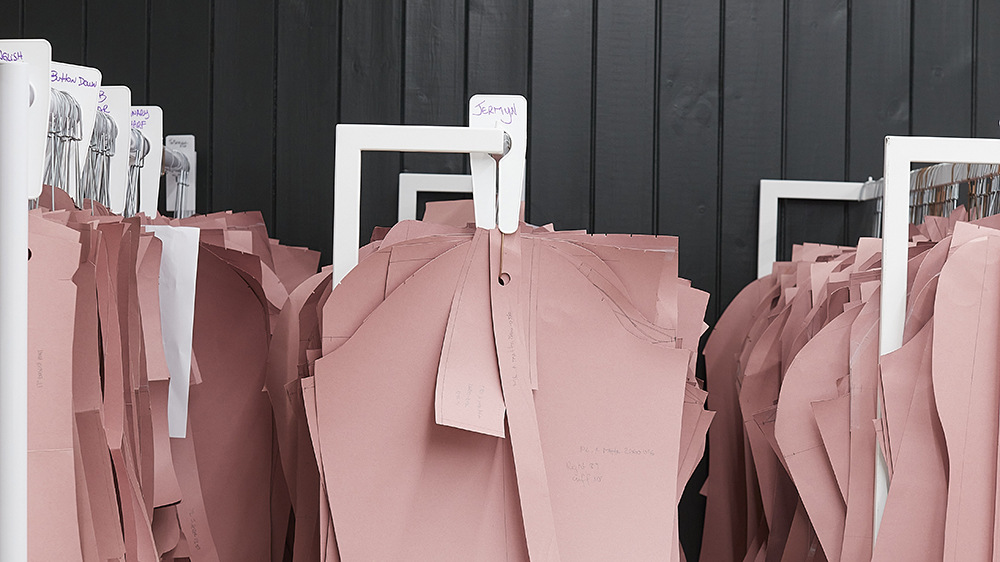 “We do everything from scratch. There are no precut blocks or master patterns. When we say our shirts are bespoke, they’re bespoke,” says Lizandra Cardoni, Pink Shirtmaker’s head cutter. “I’m also trying to achieve a very particular kind of look in our shirts. We cut close armholes, sharp shoulders and a defined line through the chest. It’s all about creating the cleanest lines we can.”

These pristine lines take shape at Pink’s spotless custom workshop in London’s Vauxhall neighborhood. The airy space is populated with Cardoni’s cutting table and nine craftspeople who wear white lab coats while working at sewing machines. It feels more like a watch manufacture than a clothing atelier, but that’s the point.

Pink’s approach is forward-thinking, informed by the brand’s relative youth. In contrast to other London shirtmakers, many of which have over a hundred years of history behind them, Pink (originally known as Thomas Pink) was founded in 1984 by three brothers. It quickly reached cult status for shirts in fresh colors and styles.

Now, under the considered guidance of creative director John Ray, formerly of Dunhill and Gucci, Pink has returned to its roots. Ray’s sophisticated ready-to-wear collection revitalizes British classics, centered on sleek-looking shirts in fabrics inspired by archival 1980s stripes. On the bespoke side, the Vauxhall studio is making shirts to rival any others on Jermyn Street—not that Pink thinks that way.

“This workshop is all about making a bespoke Pink shirt, not just a bespoke Jermyn Street shirt,” says production director Richard Gibson. “There’s a difference. We’ve always had a strong DNA, and we’re making shirts that ring true to this today.”