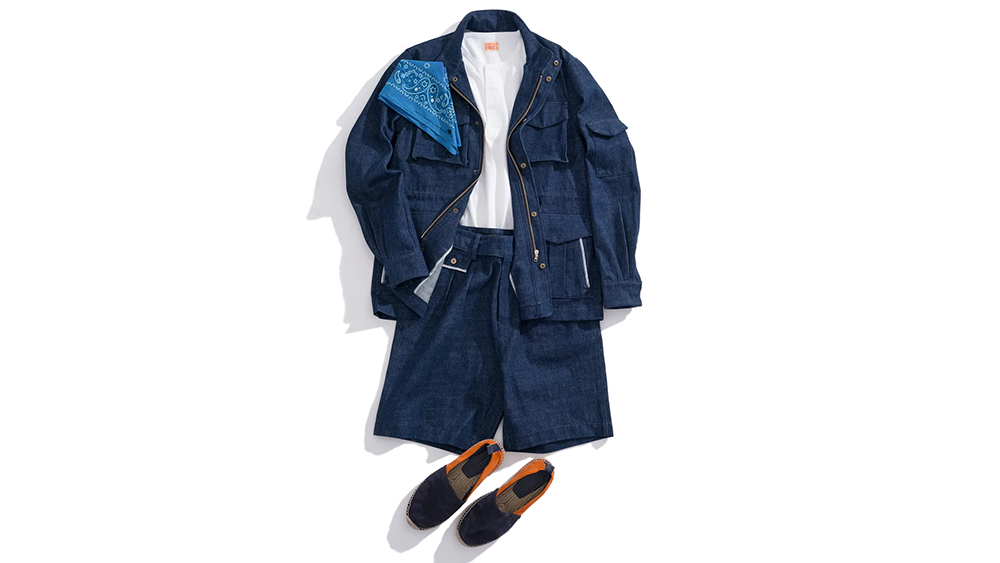 Shorts, we are told, are getting shorter each season. With inseams creeping up and drawstring waistbands becoming more commonplace, most shorts worn by men today could come straight from gym class. So what do we make of the shorts that run in the opposite direction, with knee-grazing lengths, pleated fronts and baroque buckle-strap closures, which have lately been sighted everywhere from Ralph Lauren to Banana Republic?

Though not always referred to as such, this style is known as the Ghurka short, named for the elite Nepalese soldiers who served in the British Indian Army between 1857 and 1947. Given its martial heritage and vintage styling, the design was until recently the preserve of military replica brands, the J. Peterman Company or niche Japanese labels like The Real McCoy’s.

As co-founder of Bryceland’s, a Tokyo-based menswear label that counts the Ghurka short among its signature offerings, Ethan Newton is better qualified to speak of its mainstream ascendance than most. He says the style—which he defines as “a wide and double-pleated knee-length short with a self-belting waistband”—was designed to accommodate the fluctuating weight of soldiers on the campaign trail, and that archival photos from the ‘30s and ‘40s show them being worn with a high waist and a loose fit.

According to Newton, Ghurka shorts jumped into civilian closets around the same time, as publications like Esquire and Apparel Arts (the forerunner of GQ) depicted them being worn as resort wear. He credits their mid-2010s comeback to bespoke trouser makers in Naples, who applied the double-buckled design to slimmer-fitting pants (Rubinacci in particular has found success selling Ghurka-style pants and shorts).

While makers like Ralph Lauren Purple Label and Anderson & Sheppard are serving up more luxurious versions in silk blends or linen, Bryceland’s has kept its Ghurka classic. Its iteration is made in Japan from heavy cotton twill and features a high waist, deep pleats and a generous length. “Personally, I like them as they are high and wide and the antithesis of a body-conscious short-short,” Newton tells Robb Report. “The waist closure at the hips leaves the front of the waist clean, and their volume allows them to be worn with tailoring in a new way.”

Ghurka shorts can easily be dressed up or down.  Craftsman

And while Bryceland’s design was inspired by a vintage pair, Newton and his coworkers found it surprisingly adaptable. “When we first started making them for Bryceland’s, wearing them in the dead of summer with a short-sleeve Hawaiian shirt, Panama hat and beat-down cordovan loafers was my uniform,” he says, adding that new colorways and fabrics have increased their versatility.

“My colleagues might wear them with an OCBD tucked in, a single-breasted linen or hopsack blazer and split toe derbies sans socks, and it is quite an elegant look. I find myself wearing them a little more sportily—with high-top Chucks and white sports socks, a vintage double V sweatshirt, ball cap and often a waterproof anorak, for the rainy season in Japan,” he continues.

Hong Kong’s Craftsmen Co. has put the Ghurka short and trouser at the center of its brand, and since its 2015 inception has rendered the styles in everything from washed denim to English corduroy. In the mind of co-founder Tobe Fong, the style’s blend of casual cut and tailored details make it uniquely suited to the present moment.

“It is definitely becoming more relevant, especially in a post-Covid world,” he tells Robb Report. “Years ago, when I was working in finance in Hong Kong, I’d adhere to the ‘no shorts in the city’ rule. However, since relocating to Los Angeles last year, I am in shorts most days of the week, especially when I work from home now. The wide and baggy silhouette happens to also be very on-trend, and it’s great to see so many notable designer brands putting out their own iterations of this in their collections.”

There are (hopefully) no tropical military campaigns on the remainder of your summer calendar, but there should be ample opportunities left to wear the season’s most surprising short.