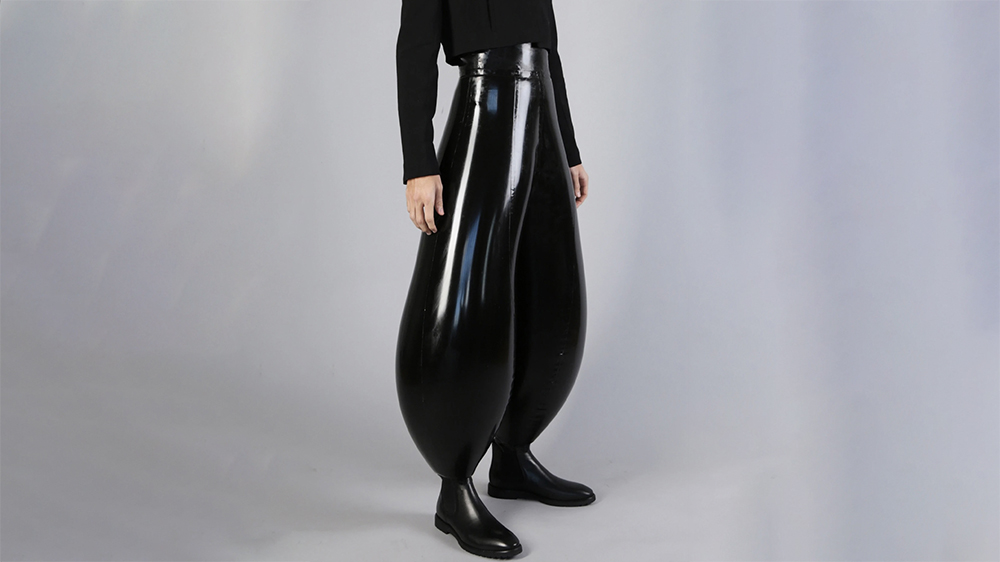 A pair of inflatable trousers are, well, blowing up the internet. Created by burgeoning menswear designer Harikrishnan, the balloon-shaped pants previously garnered a ton of attention on the ‘Gram and are now up for grabs for more than a thousand dollars a pop.

The billowy latex pants first appeared on the runway during the designer’s graduate show at the London College of Fashion. Now the 26-year-old has collaborated with the new curated fashion and art marketplace APOC Store to bring the outlandish design to the masses. Well, to those brave enough to wear them at least.

Harikrishnan—whose label is now simply Harri—is offering two different pairs of trousers online, both of which are made to order. Available in sizes small to extra large, there is a striking all-black pair dubbed “Black Limo” priced at $1,160 (£870) and a playful, carnivalesque “Striped Swirl” pair that will set you back $1,961 (£1,470).

The super-wide-leg trousers fit snugly at the waist and balloon out around the thigh and calf, before cinching in again at the ankle. This exaggerated silhouette is achieved by pumping the pants with air via a Carmo 7mm free-flow inflation valve that’s located at the bottom.

Since the statement trousers are crafted from tremendously temperamental latex, they come with a number of warnings. You must never overinflate the pants and always douse yourself in talcum powder before wearing them. You’ll need to keep the trousers away from heat, daylight, metals and oils. (We would probably add to that list, sharp objects.) It’s also worthwhile noting that they have no zip, so best empty your bladder before stepping out.

Harikrishnan previously told British Vogue he got the idea for the bulbous shape while he was walking his dog, Kai. The designer imagined how he looked from his pug’s perspective and thus the design was born. “Kai brought this collection to life,” he told the publication in February.

The pants can be pre-ordered on APOC Store’s website now. Do you have enough swagger to pull them off?

Check out more photos of the trousers below: