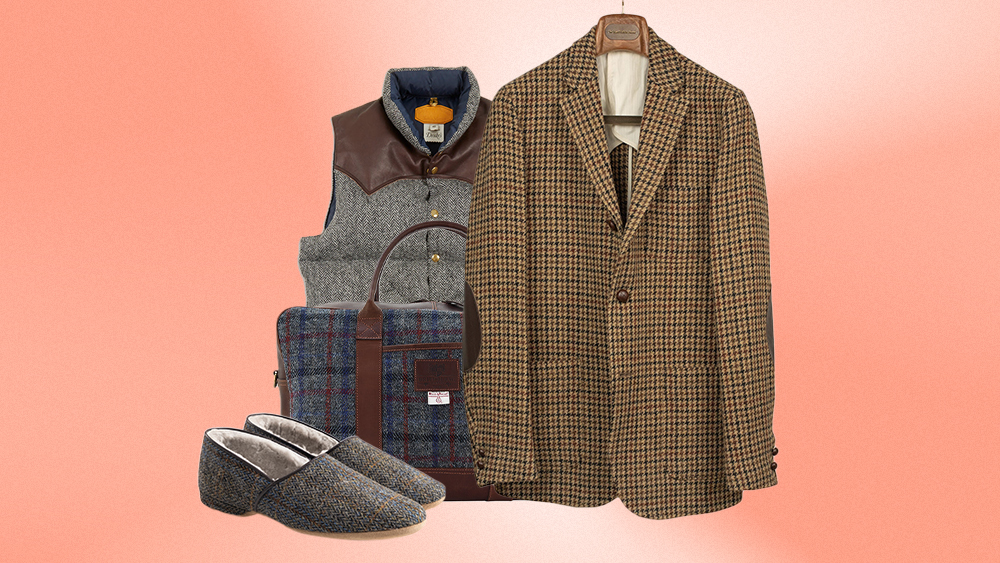 At first glance, Champagne and Harris Tweed would seem to have little in common: one is light and effervescent, the other heavyweight and hard-wearing. But much like the bubbly French export, Harris Tweed is protected by a government act that places strict parameters on what can be labeled as the real deal.

The result is a hearty tweed little different from the clò-mòr, or “big cloth,” that residents of the Outer Hebrides had been weaving in their homes for centuries. Today, the Harris Tweed Authority ensures that no corners are cut in its traditional production and stamps worthy fabric with its characteristic “Orb” trademark first established in 1909.

However, there’s no limit on what can be made from Harris Tweed. While most closely associated with sport jackets marked by leather elbow patches, brands have worked the heritage fabric into everything from sneakers to down vests to baseball caps this season, as we’ll discover in the sampling below.

What we have here is a pair of chinos with double forward pleats and military-style belt loops—but made from 100 percent Harris Tweed rather than cotton. Vitally, each pair is lined to the knee to avoid the itch factor.

Rocky Mountain Featherbed and its signature, Western-yoked down vest is having a moment, but only Drake’s stocks this iteration made from herringbone Harris Tweed. Wear it with a chunky turtleneck, jeans and hiking boots for a look that’s someplace between Scotland and Scottsdale.

Made from houndstooth Harris Tweed in a versatile check pattern, this Our Legacy piece is essentially a Tweed jacket in shirt form. A cotton-viscose lining ensures it can be worn against the skin.

Harris Tweed jackets tend to sit on the earthier side of the color spectrum, running the gamut from moss to peat. But Thom Browne—never one to stick to convention—has upended the preferred color palette and settled on an electrifying lime green.

Borrowing from the design principle of its “fun shirts,” Brooks Brothers stitched this walking coat together from different panels of patterned Harris Tweed. While it includes utilitarian touches like patch-flap snap pockets and a hood, leather elbow patches lend it a slightly professorial air.

Ralph Lauren has found an entirely new application for Harris Tweed, in this case using it as the upper material for a skate-inspired sneaker. Cleverly, the Harris Tweed Authority’s famed trademark is visibly positioned on the tongue.

That same quality of near indestructibility that has made Harris Tweed such a popular choice in tailoring applies to luggage, too. The British Bag Company has received the memo and made this spacious holdall from leather and a checked Harris Tweed.

Forget fleece—make your next vest a Harris Tweed. The “Patrick” waistcoat from Walker Slater is as heavy-duty as it gets, kitted out with a grand total of six pockets including two side-entry hand warmers.

If you’re angling for the “tweedy professor” look, this sport coat from Beams Plus checks every box: elbow patches, braided leather buttons, and guncheck Harris Tweed fabric. Commit to the bit with a worn oxford cloth button-down and corduroys or branch out with a Western shirt and jeans.

Sport coats may be a less common sight in our dressed-down times, but that doesn’t mean Harris Tweed is not long for this world. In fact, the fabric has surprising range, as evidenced by this J. Press baseball cap made from a herringbone windowpane Harris Tweed.

The heartiness of Harris Tweed would make it an unlikely candidate for anything as dainty as a bedroom slipper—but fourth-generation maker Drapers of Glastonbury would disagree. Its Lewis slipper matches a Harris Tweed upper to a soft suede sole and pillowy sheepskin lining.

Hear us out: humans enjoy being clothed in Harris Tweed… so why wouldn’t computers? Put the theory to the test with this Sid Mashburn laptop case made Harris Tweed with a cotton poplin lining and a light layer of foam padding.