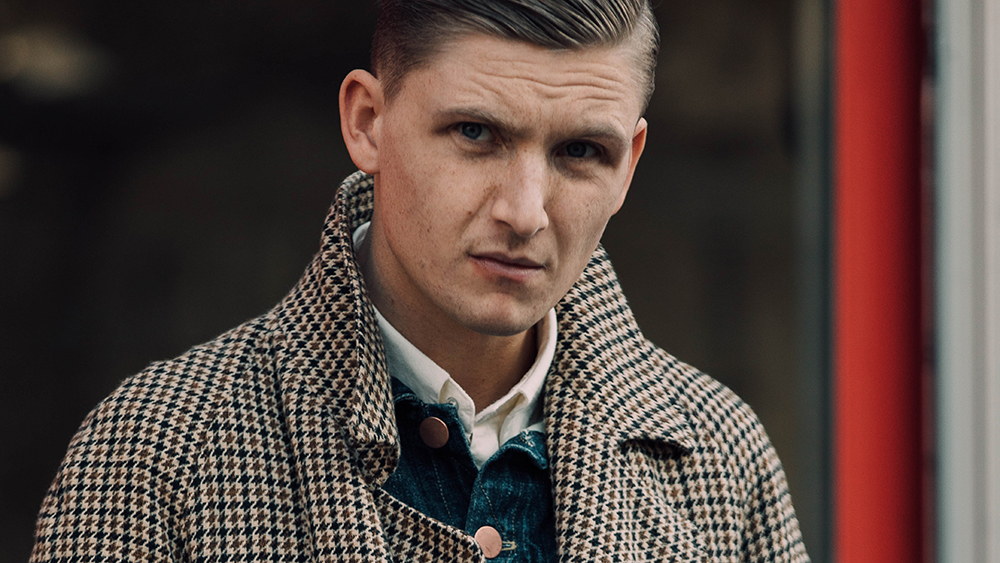 It seems that every menswear label worth its salt is currently offering its own take on the raglan sleeve overcoat. The construction technique, renowned for the range of motion it offers, tends to favor oversized silhouettes. This makes coats made with raglan sleeves really easy to slip on and helps them feel especially of the moment.

“The design is about ease of movement so the style is both comfortable and versatile,” said Olie Arnold, Mr Porter‘s style director. Thanks to the increased amount of space around the underarm, the raglan sleeve is great for pairing with layers of structured clothing—be it a sport coat or suit.

But if it wasn’t for one man’s battlefield heroism in the early 19th century, the current favorite sleeve head of stylish guys around the world might not exist.

That man was Lord FitzRoy Somerset, a British military officer who was shot by a French sniper at the Battle of Waterloo in June 1815. The wound to Somerset’s right arm was so severe that it had to be swiftly amputated. (Legend has it Somerset demanded the surgeon bring his arm back so he could retrieve a ring given to him by his wife. Romance has its many guises, you could say.)

A version of Grenfell’s Campbell coat, which features a raglan sleeve.  Grenfell

For the next three decades, Somerset continued his duties as a distinguished and fiercely loyal soldier, but he took issue with the lack of movement his military tunics allowed. That changed in 1851 when John Emery founded Aquascutum, an outerwear specialist to this day.

At its outset, Aquascutum was primarily a bespoke tailor, favored by military officers and the landed gentry. Emery and his band of tailors developed an entirely new type of sleeve head for Somerset, using a continuous piece of fabric extending from the collar to the underarm. This allowed FitzRoy to move (and fight) more efficiently. In 1852, Somerset was elevated to the peerage and named the first Baron Ragland. He died just two years later during the Crimean War, but his legend—and name—carries on in menswear folklore.

These days, you can find the raglan sleeve used on everything from knitwear to baseball shirts. But the overcoat is perhaps where this simple technique that lacks definition and structure is best expressed.

Josyln Clark, the creative director of the London-based heritage brand Grenfell, told me that “no less than five of [our] iconic styles incorporate a raglan sleeve.” The brand, another outerwear stalwart, produces everything in its factory in east London, with a focus on its all-weather-conquering, proprietary fabric called Grenfell Cloth, which is like a cotton gabardine. Its Campbell model, which dates back to the 1930s, is a fine example of what a raglan sleeve raincoat should look and feel like: ultra-classic, defiantly comfortable and easy to slip on over a suit.

“Traditional outerwear brands like Burberry and Aquascutum continue to offer classic options of this coat,” Arnold, from Mr Porter, said. “However, we’re now seeing modern interpretations from some of the best men’s wear designers and contemporary brands—in various styles, patterns, belted and not-belted,” says Arnold. That variety extends to fabrics, too. Arnold pointed us to The Row’s refined take on the metaphor, cut from a supple black lamb suede.

These days, the raglan enjoys an international reputation. Valstar is one of Italy’s foremost outerwear makers, renowned predominantly for its Valstarino, a take on the A-1 flight jacket. But the company started making rainwear back in 1911; Matteo Bozzalla, Valstar’s brand manager, said the brand plans on offering more raglan sleeve coats in its assortment. “The future for the company is to move towards a more relaxed and slightly oversized [silhouette].” Plus “it’s easier to travel or ride a Vespa.” For some, that’s more than enough reason to invest.

Further afield, the razor-sharp Japanese label Coherence is also a proponent of the style. “I am attracted to what makes a romantic coat,” its founder and creative director Kentaro Nakagomi said. Drawing inspiration from 20th-century artists and intellectuals, the designs are surprisingly fresh and modern with a flattering A-line silhouette. The Corb is one such example and takes its name from the architect Le Corbusier, available in many “in-house developed fabrics using the newest Japanese technology,” Nakagomi says.

And it should come as no surprise that guys who want to feel more comfortable and relaxed in their clothes, instead of confined, would gravitate toward the raglan. Leave aside the fact that stylish guys have been wearing it for hundreds of years. If it can keep you swinging on the battlefield, it seems well-primed for helping anyone survive the rigors of modern life.