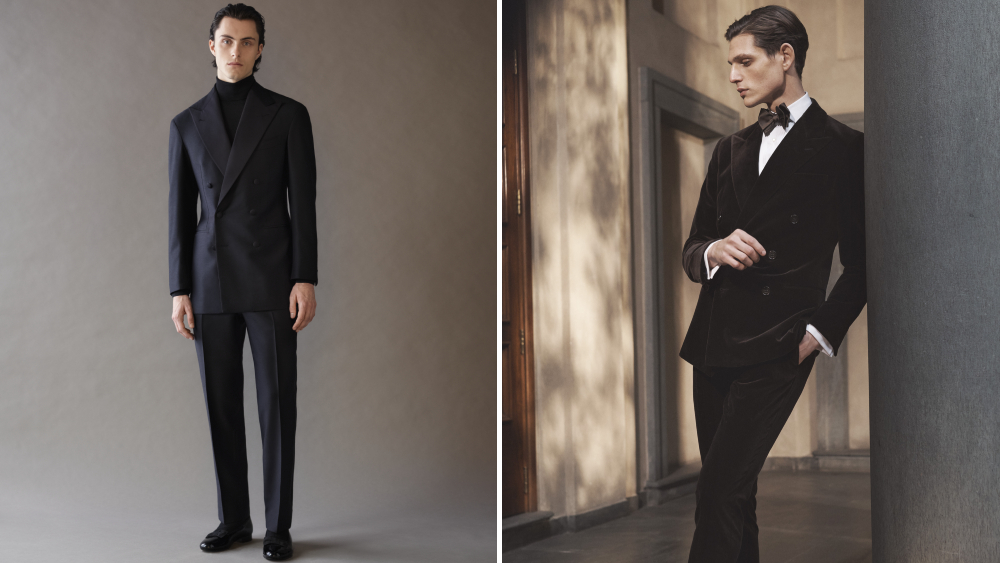 The holiday season, flush with yuletide cocktails, black-tie benefits and end-of-year soirees, is the annual Olympics of formal wear. But this year the party circuit will look very different. Which raises the question: Should you still get dressed up when there’s nowhere to go?

“The definition of ‘evening’ has changed so much,” says Bruce Pask, men’s fashion director for Bergdorf Goodman and Neiman Marcus. Still, he thinks the impulse to spiff up remains as strong as ever. “Even if it’s dinner at a friend’s or the two of you at home, there’s something about honoring every occasion,” Pask says. It’s a sentiment shared by menswear consultant Tom Mastronardi, who has been suiting up even for the supermarket. These days, he says, an event is in the eye of the beholder: “For the love of God, if we’re not going out to a gala, make your own occasion. Uncork a bottle of something you’ve been saving, put on your best bib and tucker and do the deed.”

But “best” is subjective. Even before the pandemic, the pendulum of men’s fashion was swinging toward casual, meaning options now extend well beyond traditional dinner jackets. Much like the evolution in everyday tailoring, the old rules have given way to something softer and more louche.

As general manager and wine director of the Polo Bar, Darnell Dodson has had a front-row seat to this shift. In an average year, over the course of the holidays Dodson attends some 30 events. He’s still hoping to host his annual New Year’s Eve bash, albeit socially distanced, but this year he’s thinking outside the tux.

“My shopping trends have definitely changed since I’m not wearing a suit six days a week,” Dodson says. For Zoom cocktail parties and other virtual fêtes, Dodson and his friends have been dressing up but with a laid-back approach—say, a cardigan with a dress shirt and bow tie. While asserting that Ralph Lauren “sets the standard” for evening wear, Dodson is looking to more creative riffs on formal wear from the likes of Kim Jones at Dior and custom tailor Manolo Costa.

Pask agrees that Dior Men’s fall collection, which marries casual silhouettes with opulent silk textiles, is one road map for dressing up now. He also points to Giorgio Armani’s unstructured velvet jackets, Tom Ford’s satin drawstring waist pants (“Worn with a sweater, how elegant is that?”) and a wide array of silk shirts, all decidedly relaxed pieces that still confer a sense of occasion.

Mats Klingberg, proprietor of Trunk Clothiers in London and Zurich, likewise approves cozier alternatives to the usual evening standards. Instead of a shirt and tie, he’s partial to a turtleneck beneath a tailored jacket, a look he says is “formal but still comfortable.” The key, Klingberg advises, is selecting a fine-gauge knit, like Trunk’s, made of Loro Piana merino wool, or those by John Smedley.

For his part, Mastronardi is an eveningwear purist who believes one needn’t stray too far from the old penguin suit. He’s even called on one client, the tailor Paolo Martorano, for a double-breasted tuxedo made in time for the holidays. If donning a tux at home sounds extravagant, consider Emily Post’s manifesto on etiquette: “A gentleman is always supposed to change his clothes for dinner, whether he is going out or dining at home alone or with his family.” For the latter, she recommends a lounge suit but allows “an ‘old’ tuxedo worn instead.” (It was 1922, after all.)

But even Mastronardi concedes that current circumstances allow for bucking convention. A cashmere robe with a dress shirt? A tuxedo jacket with chinos? Leopard-print slippers? Why not? In an intimate setting, one has more room to play. “There’s something perfectly insouciant about a jacket over pajamas,” Mastronardi says, noting that he plans to experiment with his new suit. His advice? “Stick your tongue as firmly in your cheek as possible, and have fun with it.”