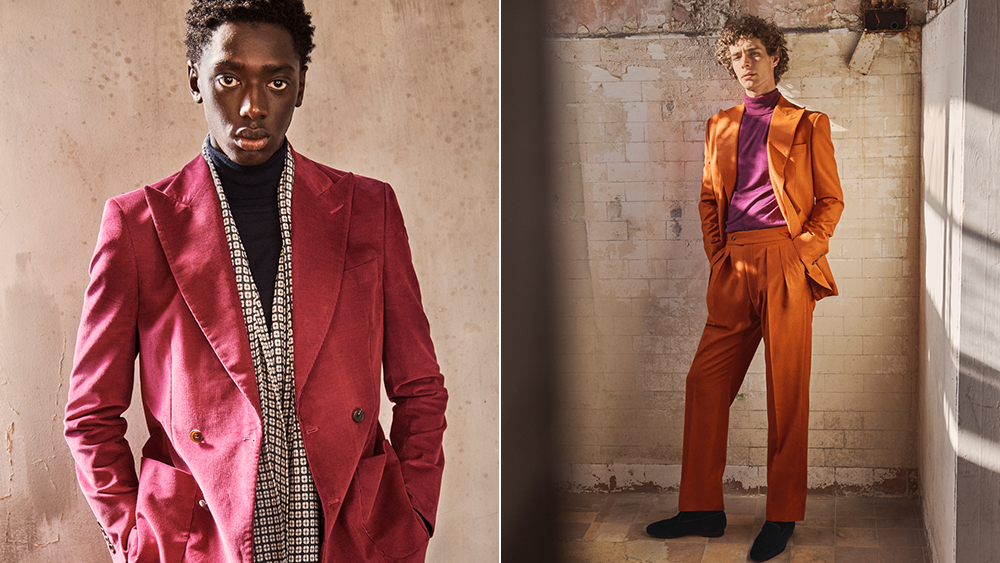 Donning a turtleneck sweater—or depending on your place in the Anglosphere, a roll neck, polo neck or skivvy—below a suit or sport coat is by no means a novel move. Over the last century, it’s been widely practiced by anti-establishment intellectuals or tie-adverse cads ranging from Samuel Beckett to Steve McQueen.

But as we move into an increasingly tie-optional world, one no longer has to be swimming in ennui or blessed with leading-man looks to incorporate it into their own style. What does have to be considered is whether a prospective turtleneck will play nice with your tailoring to begin with.

Considering the style’s early adoption among dockworkers, fishermen and sailors, it should be remembered that the original purpose of the turtleneck was to insulate wearers from the North Atlantic’s chilly blasts: a task best accomplished by thick gauge wool and oversized necks.

Vintage-inspired specimens that call back to those turtlenecks of yore, such as Drake’s submariner roll neck or the RAF roll neck pullover by Bryceland’s, will provide superb insulation but are less likely to fit comfortably below a jacket. And if they do, they may risk overheating the wearer.

“As much as I like a chunky roll neck, the type we offer‚ which are finer gauge but made in Scotland with plenty of character, pair better with tailoring,” says Anglo-Italian co-founder Jake Grantham. “There’s no worse feeling than a bead of sweat arriving at your forehead just as you sit down to dinner.”

But a finer knit is not the sole factor that makes Anglo-Italian’s cashmere roll neck tailoring-worthy. It also features a slightly shorter cut that better complements the higher-rise trousers or jeans more likely to feature in tailored looks.

The Armoury’s recently introduced roll neck produced by 252-year-old knitter Drumohr is designed with shorter hems for the same reason. But it also benefits from a proprietary fabric blend made expressly for the New York and Hong Kong-based men’s store.

“Our Drumohr roll neck is made of a wool-silk-cashmere mix yarn which makes for a fine, compact, and luxurious roll neck sweater that looks great under tailoring,” says Armoury co-founder Mark Cho. “It’s thin enough that it does not affect the jacket’s silhouette and can even be tucked into trousers for a very neat, sharp look.”

Considering its address, it should come as little surprise that Savile Row label Richard James stocks a line of fine-gauge Merino wool roll necks crafted with suiting in mind.

“First and foremost, they are fine, which means the knit is quite thin,” says Richard James co-founder and CEO Sean Dixon of their tailored utility. “They are knitted so as not to have too much excess fabric and fit neatly beneath a jacket. It is important to avoid bagging, for the overall effect to be quite neat.”

And while its fine knits may make for a “neat” appearance, Richard James’s roll necks are not expected to fade into the background of a tailored look. On the contrary, Dixon views them as a chance to break out.

“When wearing under sports jackets, there is more of an opportunity to wear stronger colors, something that stands out like pink, yellow or lilac for instance,” he says.

Dixon believes that the label’s roll necks can even factor into formal looks, so long as the color palette is a bit more restrained. “With a suit, I would tend to lean towards a more tonal look. Grey with grey, navy with navy,” he says.

Best of all, you’ll no longer need to think of what kind of tie to throw into the mix; consider your neck spoken for.