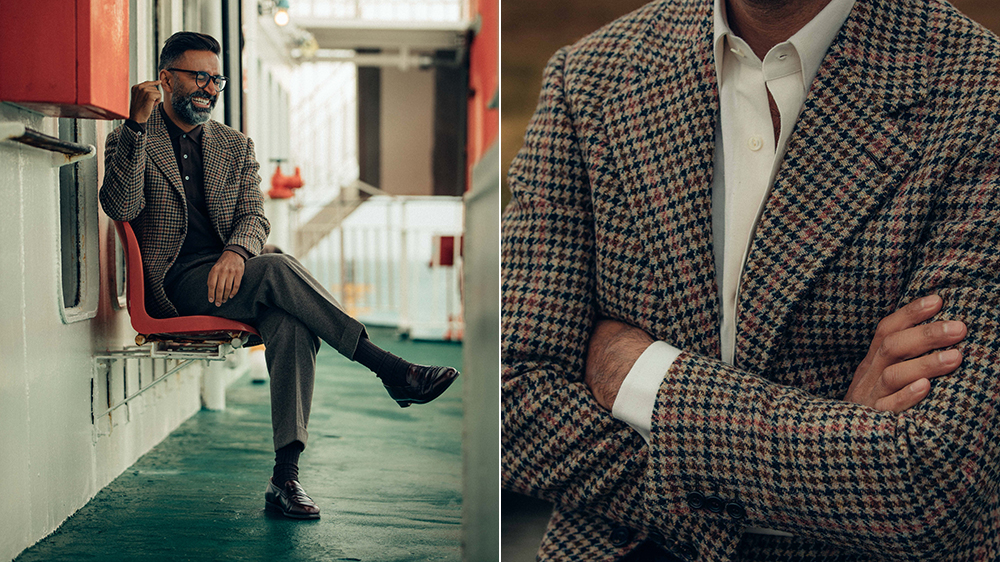 As an in-demand menswear photographer, Jamie Ferguson is used to shooting cloth, not designing it. But Ferguson—who may be better known by his nom de Instagram, JKF Man—got on the other side of the lens to design a Harris Tweed that has been tailored into a sports jacket by the Anthology and is the basis of a forthcoming chore coat from No Man Walks Alone.

The project is a homecoming of sorts for Ferguson, who at 15 moved from Canada to the small Scottish village where his mother was raised. During the summer holidays, Ferguson would take road trips across the Scottish Highlands and soak in its visual splendor.

“You’d often see these amazing colors in the rugged countryside: purples, reds, oranges, black and yellows,” he tells Robb Report. So, when Ferguson had the opportunity to co-design a fabric with the mill Harris Tweed Hebrides in 2021, he needed only to look to those memories for inspiration.

“When I started my career in menswear, I quickly fell in love with jackets made up in Harris Tweed due to their rough and ready feel and look,” he continues. “I’d always been on the lookout to somehow combine the colors I’d seen growing up when traveling with this amazing cloth and this collaboration has given me that chance.”

Ferguson first asked to see any deadstock houndstooth fabrics that the mill had at hand, as he wanted his Harris Tweed to have a vintage feel. After finding a fabric that was nearly ideal, Ferguson requested that just two of its colors be swapped out until he had a pattern in Highland-esque shades of beige, caramel brown, navy, soft blue and raspberry pink.

Once the design was set, 100 meters of the cloth were made up according to the exacting standards set out by the Harris Tweed Authority, which specifies that it must be handwoven by the residents of Scotland’s Outer Hebrides islands working in their own homes. Ferguson’s fabric was finished at a weight of 470/500g, or what the hardy mill classifies as a “featherweight.”

Afterward, 20 meters were wholesaled to the Parisian fashion label LSD, who plans to sell it to clients as cut lengths for tailoring; 20 more meters were supplied to the online-only retailer No Man Walks Alone, which is using it to produce a triple patch-pocket chore jacket that is expected to launch in November; and the remaining 60 meters were earmarked for the Hong Kong and Taipei-based classic menswear label The Anthology, which had been a backer of the project since its inception.

In its hands, Ferguson’s fabric has become a sports jacket tailored in the Anthology house style. The jacket, which is available now online and retails for $1,180, is marked by patch pockets, a 3/2 roll and a slightly extended, subtly roped shoulder constructed without padding.

Anthology co-founder Buzz Tang says that he and Ferguson initially considered using the Harris Tweed to make a traditional British shooting jacket or a field coat. But the duo decided that matching the dense country fabric to the brand’s own “neo-classical” aesthetic would make it more suited for contemporary wear.

“Let the heritage cloth and the modern silhouette create their chemistry,” Tang says of the combination.

After dipping his toes in design, Ferguson returned to the camera. At the start of October, he traveled to the Scottish Highlands and the Outer Hebrides with Tang and the menswear writer Manish Puri (who in this case, served as the model) to shoot a campaign around the Anthology jacket, bringing the project full circle.

If there’s a lesson to take from Ferguson’s project, it’s that you can go home again—and share a little bit of it with the rest of the world, too.