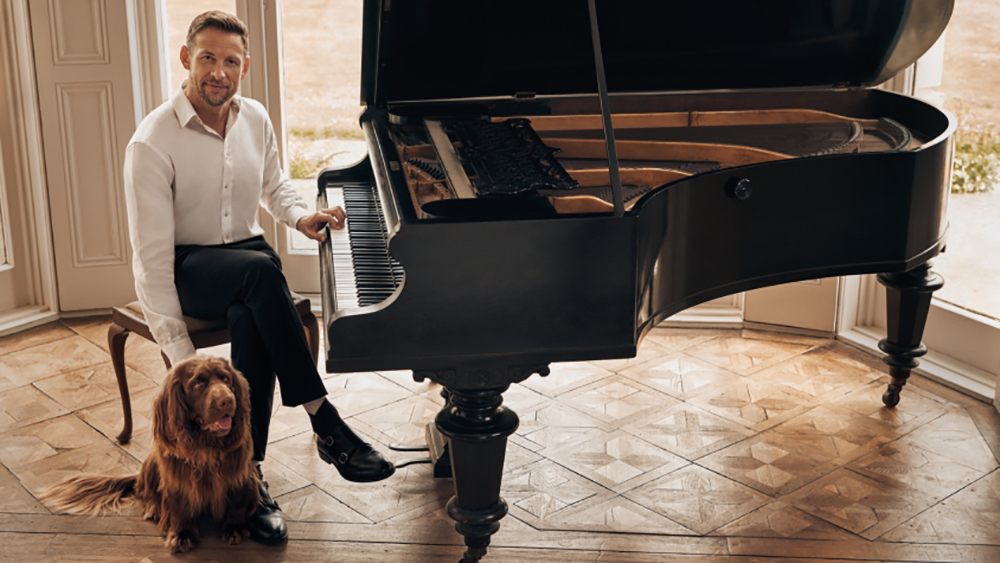 Jenson Button—with affable good humor—won’t let our interview begin until my office’s pull-down blind, visible to him via Zoom, is straightened out. That dealt with, he becomes immediately lucid, as he talks about the various endeavors going on in the 43rd year of his extraordinary life.

These include Extreme E—a radical new electric racing concept, taking place in the most remote corners of the planet—as well as a new four-part documentary about his folkloric 2009 title-winning campaign (Brawn: The One Pound Formula 1 Team, showing on Disney+ soon).

A serious question to start with: does that issue with my blind correlate in any way to your prowess behind the wheel?

[Laughs]. To be fair, I, as a driver, always needed something that was finely tuned, something that suited my style. For me, on the engineering side, it was so important to get the car right. I couldn’t ever rag a car like Fernando [Alonso] or Lewis [Hamilton] can. I need to have a balance that suits me. And that’s definitely a weakness of mine. But when I do find a balance that suits me, you know, I always felt that I was unbeatable. So yeah—strengths and weaknesses.

Sir Jackie Stewart once told my frenetic younger self that being good at motorsport (and life) involves psychologically “deflating the ball”—bouncing it slowly, with more control, so to speak…

We’re all definitely different. And if you are that [frenetic] sort of person racing, you’d be definitely feared, because everyone would be worried about your next move because we understand each other as drivers. Take that fight between Lewis and Max [Verstappen] at the British Grand Prix last year. I’d never seen Lewis on the back foot when it comes to racing wheel to wheel. But because Max was quite like yourself—obviously, with a lot more skill—I think Lewis was, “Whoa, hang on, I didn’t expect that!”

What makes you and Hackett a great combo?

Well, first of all, it’s been a real pleasure to work with them for so many seasons. I’m a true Brit, even though I don’t live in the UK. And I love how diverse the brand is. One day, I could be wearing a black-tie suit, which is fitted by their master tailor—which I did for my wedding—and then the next day, I can be in complete casual clothes. It’s great to be associated with a brand that is so diverse.

When I got fitted for my wedding suit, it was so very British: being made a cup of tea while they did the fitting. Then, “I’d like to see you three more times if you can?” “I live in LA!” It’s such a cool experience going in there. The shoots that we do are interesting, too. They feel natural.

“Keep It Simple”—how does Hackett’s new catchphrase work for you?

I keep it quite simple with what I wear, I love to feel comfortable—that’s key for me. And I travel a lot, I’m on a plane a lot. So I need to be in comfy clothes. When it comes to suits, though, I’m very picky, to be fair, when it comes to something that fits you, right? You know, a good suit gives you massive confidence. And a bad-fitting suit has the opposite effect. It’s a massive difference for me.

What’s the philosophy behind your JBXE electric off-road racing program—and what motivated you to found it?

There are many different reasons. I can come from the environmental side, and it’s great to be involved with that initiative too. On the environmental side, they’re all electric vehicles, so it is new technology that we’re pushing, which is great. I think there are other opportunities to push hydrogen and biofuels, and I love that we have the best engineers around the world, trying different things to see what really works. Remember when we invented the jet engine and thought aviation was sorted? I feel that it will be the same – in a few years we’ll work out which is the best direction.

The racing is also great. We’ve stepped foot in places that no other human has. The mechanics are all from the GT team that I have in the UK so they’re all dipping their toes—no, feet—into off-road racing. The guys are racing in Chile this weekend—the driest place in the world, supposedly. And we raced in Greenland last year—we’ve raced in some fantastic places around the world.

How is the pedal-to-metal experience different?

I still can’t get used to the engines. I really struggle with not having sound—you don’t have the whine. And it’s very difficult to understand where you are on a torque curve, because it’s all automatic torque. I’m actually racing next weekend in a series called Nitro Rallycross in Minneapolis, which is Travis Pastrana’s baby. Again, it’s electric vehicles, 1,000 horsepower, and electric forward-drive on dirt.

What drove you toward the climate change issue?

I still don’t do as much as I should, but I think we all need to be putting in a bit of time to making change. I’m no expert – and I think you need to listen to a lot of people on climate change. But when you actually look at the different scientists who are studying where we are and where the future is… I realized that we need to make a change. It’s about bringing awareness to the issues and to stop people saying: “Really, do we have climate issues?” Because the answer is yes, yes, we do have climate issues. And I know I’m in a privileged position, where I can afford to do things and to help. And that’s why I’m trying to push it as much as I can.

As a former Formula One Driver, you’re open to criticism about addressing this stuff—thoughts?

It is tough. Lewis is traveling around the world in three countries racing F1 cars, and fair enough that’s not very green. But the plane is going to fly that direction anyway. And the Formula One car has the greenest combustion engine on the planet. OK it’s a sport so do we need it? Yeah, I think we do because it puts a big smile on a lot of people’s faces.

It has a big, positive effect on millions of people around the world. Sport brings people together. I also get people’s point. But yeah, as I said, technology-wise, an F1 engine is the most efficient petrol engine there is on the planet. And the technology is always moving forward—we’re looking at 10 percent biofuels now as well. And hopefully, we will see 100 percent biofuels by 2026.

How do biofuels effect performance?

You need an engine rebuild a lot more often, when you’re running with biofuels at the moment, and they’re obviously very expensive as well. So it’s about trying to make them a bit more mainstream. And then obviously, the prices will come down. As for EV, it’s massive in the car world at the moment—but Formula One with no sound is weird. It takes away a lot from the sport. Also, to run an hour-and-a-half race with an EV car means being full throttle, most of the time, so the car would have to be another 300 kilograms heavier, at least, to take the batteries on board that would you would need for that amount of time. Hydrogen is of interest. Hopefully, in a few years, we’ll look back and say, “Oh my God, we spent so many years trying to do that. And this is the best option.”

What do you look for in a road car?

I’m a racing driver—so I love supercars, I love hypercars. But I drive a hybrid [Mercedes-Benz] S-Class… That’s because I live in LA, where the traffic’s horrific. So I drive my S-Class listening to country music. World champion—and country music boy, everybody!

I will also have a new Lotus Evija coming at the end of this year. I love that they’ve taken on all this technology, going EV, but it’s got 2,000 horsepower. I love that people have jumped on to the EV thing, and thought: “Hang on a second—we can have 2,000 horsepower, and zero-60 in 1.8 seconds. This is great!”

I hope that road users and lovers of these supercars and hypercars also understand the reasons for it. The negatives are, they don’t sound great. The positives? They can be unbelievably quick and can look beautiful.

So it feels like engine technology has a long way to go still?

Yeah, I don’t know which way it will go. But it needs to be changed. And that’s the key. Whichever way it goes I’m fully behind it. There’s a real divide though—there are people who love the EV concept and people who hate it. Nothing in the middle. It’s like Marmite.

What can we expect from Brawn: The One Pound Formula 1 Team?

The 2009 season it’s all about had everything. We came from what people thought was nothing at the end of 2008—no team, no funding [Honda withdrew from the sport in December 2008—to winning a World Championship as a private team. We had nothing apart from an amazing car in terms of aerodynamics. We didn’t have an engine until the team was bought by Ross Brawn for a pound. I don’t think anyone really expected anything from us. We had no infrastructure, we hadn’t done any pitstop practice, we’d not done any starts. So it’s a proper Hollywood storyline. Difficult races, which are emotionally just very, very difficult. It’s also a mental health story about the pressure that I put on myself.

And then eventually clinching it in Brazil—my teammate Rubens Barrichello is Brazilian so I’m being booed constantly, but then cheered on the grid…

Is mental health an issue in sports?

The passion in football must be unbelievably overwhelming. I struggle to even be in a football crowd and cannot imagine how [Bukayo] Saka felt missing that penalty [in the Euro 2020 final]. The pressure that kid was put under… Mental health and sport is something that isn’t talked about enough. The pressure can be insane. And they’re afraid to talk about it, because it’s thought of it as a weakness. It’s something that I’ve been trying to push lately—that we should be more open. It was great to see McLaren’s Lando Norris speak out about the pressure that he felt under.