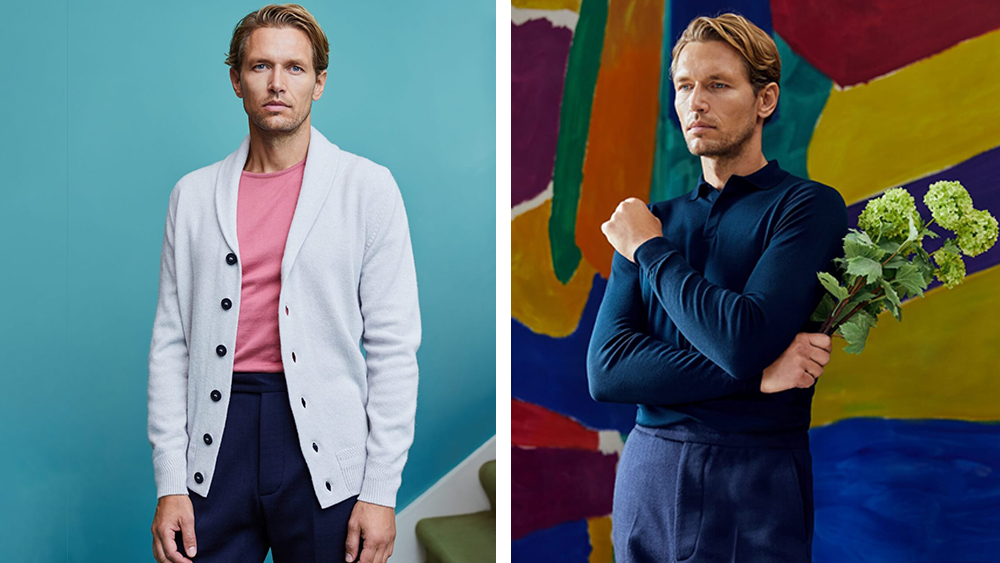 Derbyshire, England-based John Smedley has been synonymous with quality fabrics since 1874. Almost 150 years after it was founded, the brand is still a fixture in the closets of many a well-dressed man—a true testament to its staying power. Originally beginning as a mill for muslin and cotton, the company expanded into knitwear, hosiery, underwear and knitted outerwear and, in the 1960s, developed its signature sweater line, which helped propel it to international expansion. Around this time, the British royal family also took notice. Queen Elizabeth II paid a visit to the brand’s headquarters and soon after John Smedley was named the official knitwear supplier to the. In 2013, it received a royal warrant for providing the “place and quality of manufacturer of fine knitwear,” solidifying its place in the pantheon of luxury makers.

For many menswear aficionados, John Smedley sweaters are a must-have. American fashion designer Todd Snyder, who has carried Smedley knits in his store since 2017, says, “We share a common belief that timeless wardrobe staples, like the sweater polo and crewneck sweater, are best when elevated with quality materials and craftsmanship. You can feel John Smedley’s quality firsthand.” While it may not have household name status, John Smedley is a gold standard in men’s fashion.

A large part of the brand’s appeal is its distinctly British sensibility. Like Anglo tailoring, the emphasis is on classicism and formality. Smedley knows that some traditional knits, like a merino wool polo or turtleneck, don’t need to be improved upon. That commitment to consistency is one reason why the brand continues to be a resource for discerning shoppers.

“John Smedley is a British institution,” says London-based model and creative director Richard Biedul. “I like knowing the product is produced in the U.K. from the best, most sustainable raw materials, using traditional factory processes and employing the best artisanal craftspeople possible.” Biedul is particularly fond of the brand’s roll-necks during the colder months, which he trades for T-shirts in spring and summer, adding: “There is always a colorway and gauge to suit my needs.”

Smedley’s wide range of options offers knitwear essentials that can be worn year-round. Kuan-Ming Huan, the co-founder of Taipei-based retailer Uncle Jude’s Fitting Room, says the brand is “is very suitable to Taipei’s weather…extra-fine merino wool is good for warmth in the wet and cold winters, and the Sea Island cotton is great for summer.” Chris Snyder of U.K.-based retailer The Modern Draper is partial to the Cullen, a hardy shawl-collared cardigan equipped for damp British winters, saying, “It’s one of my favorite styles because it wears like an outerwear piece…it also pairs well with other classic British brands, like Baracuta.”

Not to mention, Smedley’s classic designs and silhouettes also add to the sweaters’ versatility. “My personal favorite styles are the Belper, Dorset and the Adrian,” says Dale Allman of U.K.-based Union 22, listing several variations on the brand’s best-selling knit polos. “We like to keep things simple at Union 22, and the clean style of the brand makes pairing pieces quite easy under blazers with a pair of tailored trousers. Our younger customers prefer to pair them with jeans and sneakers for a more casual look.”

John Smedley has such a strong fan base among designers that several of them, including Japanese streetwear legend Hiroshi Fujiwara and buzzy young British brand Lou Dalton, have collaborated with the brand, infusing the classic designs with a frisson of edginess. Even with these novelties, John Smedley sweaters continue to prove to be timeless. Between its heritage, royal affiliation and broad appeal, the brand is poised to continue to be a menswear staple for generations to come.