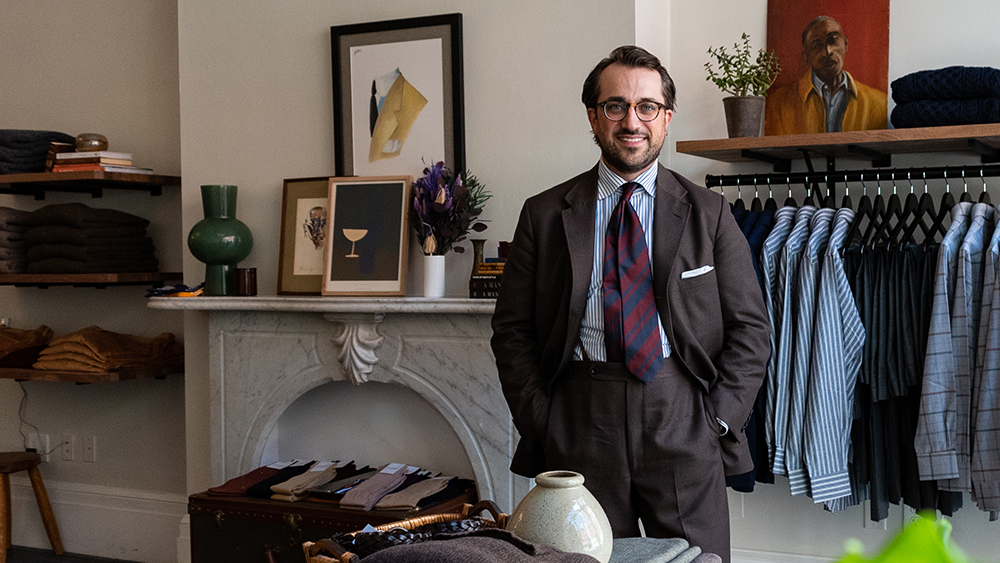 Once a presence in every medium-sized town in the country, the traditional American men’s store is perilously close to extinction today. And those that remain, like The Andover Shop or J. Press, tend to have histories stretching back a half-century or more. So, it’s highly unusual—to say the least—that Philadelphia is getting a brand new one in 2022.

That shop would be Junior’s, which founder Glenn Au launched in 2020 as an online-only, one-man haberdashery that saw clients by appointment or on the road. Now, some two-and-a-half years later, Au can welcome them into a dedicated retail space just a few blocks from Rittenhouse Square.

It feels like the end of a journey Au started 10 years ago, when he began working at O’Connell’s Clothing in his hometown of Buffalo. He credits the store, which specializes in Ivy style staples like soft-shouldered sportcoats and Shetland sweaters, with laying the foundation of his own personal style. The family-owned firm, which was established in 1959, also did a brisk online business, which introduced Au to the world of e-commerce.

Au eventually moved south and took a job at John B. Rourke in Savannah, where he learned the ins and outs of made-to-measure clothing. In addition, the clientele’s more diverse tastes taught him to look beyond the strictly defined aesthetic of O’Connell’s, typified by undarted jackets with center vents and a 3/2 roll. His last employer before going solo was H. Stockton, a legendary men’s shop in Atlanta. Its more contemporary tastes exposed him to Italian-style tailoring, while its staff pressed the importance of customer service and building personal relationships.

After moving to Philadelphia in 2020, Au was ready to begin his own business. The only thing he couldn’t have accounted for was a once-in-a-century pandemic. “I was ready to put out the first Junior’s email and a few days later everything shut down,” he says of the business’s initial launch. “I basically hit pause on everything, which was just insane looking back on it.”

The plan for Junior’s was to make made-to-measure clothing in the United States, in addition to selling classic accessories like English-made neckwear—all of which became a tough sell with the onset of stay-at-home restrictions. But Au decided to power through, re-launching Junior’s in July 2020. “I was doing this regardless,” he says. “I wasn’t just jumping off the ship after we’d left the dock.”

Au credits a willingness to adapt, in addition to meeting clients face-to-face and eventually holding regional trunk shows, with seeing Junior’s through its challengingly timed start. He also believes his business has benefitted from presenting classic American style through a more contemporary lens. “I show clothing that you might associate with your grandfather or a college professor, but I’m a 34-year-old guy that can show you how to do it and still look modern,” he says.

A selection of Junior’s readymade American classics on display.  Junior's

That spirit has manifested in Junior’s “house style,” as seen in a sport coat that combines traditional features like a 3/2 roll, natural shoulder and hard-wearing English cloth with contemporary details including a darted front, side vents, open patch pockets and a half-lined interior. It’s also evident in the design of Junior’s readymade trousers, which balance a higher rise to a more tapered leg. Its made-to-order oxford cloth shirts—which feature a proprietary collar design—are available unlined and unfused to satisfy the most purist of customers, or can be lightly lined and fused in keeping with more modern tastes.

After spending two years servicing clients online or by appointment, Au is itching to host them inside his store, which opened this month on the first floor of a 106-year-old townhouse located in one of Philly’s most picturesque locales. Inside, the shop will be split between a front area where Au will offer ready-to-wear items like sweaters and neckwear, while a clubby back room will be reserved for fittings. “It’s an experience that you cannot replicate online,” Au says of in-person shopping’s allowance for hands-on test-driving.

Au fitting a client in the shop’s clubby back room.  Junior's

And following the experience of the past two years, Au thinks that customers, too, are craving actual face time.“You build relationships with clients, and that’s what people are looking for when they come into a brick-and-mortar shop—some real advice, real conversation. I think that’s super important in this day and age.”

As Junior’s settles into its new home, the business is waiting to receive its fall merchandise. The coming season will see its largest order of Shetland sweaters to date, as well as vests and blousons made from English tweed. Whatever the future may hold, Junior’s and its founder remain committed to the classics. Just don’t expect them to be presented exactly as your grandfather would have received them.

“I would never want those places to change their aesthetics,” Au says of the men’s shops that inspired his own. “But you have to learn how to speak that aesthetic to a different generation.”