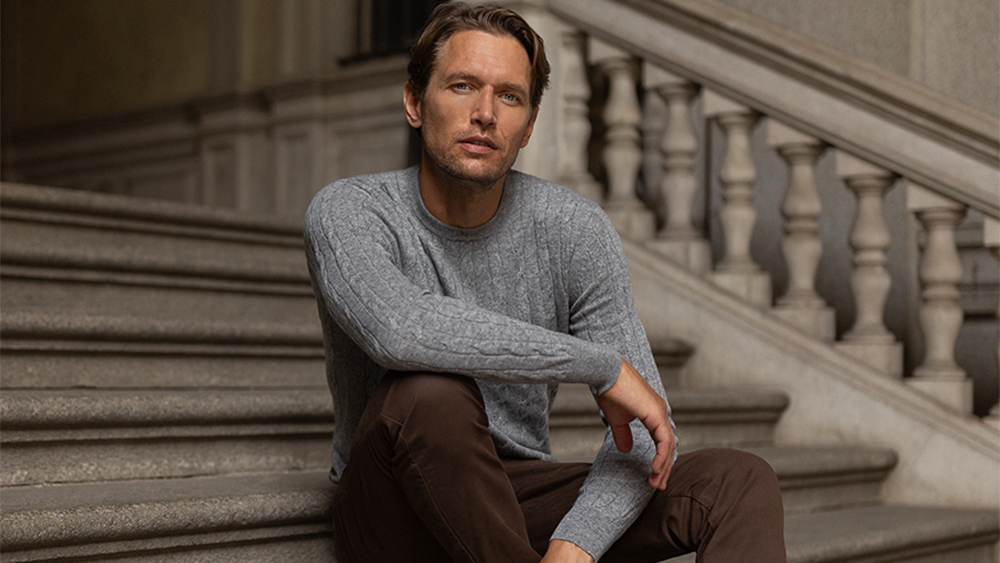 As an adopted New Englander, I wear Shetland sweaters like a second skin from October to April. But man cannot live on coarse Scottish wool alone, which is why I branched out into Luca Faloni’s cashmere sweaters this season.

More specifically, I’ve fallen for the Italian maker’s pure cashmere cable knit in ivory. Such a sweater has been on my bucket list for some time, and Faloni’s model—made with two-ply cashmere sourced from Italy’s renowned Cariaggi mill—seemed just the thing.

However, you might say that I have some trust issues in the cashmere department. In the last decade, I’d snapped up a number of discounted cashmere crewnecks from mall brands that felt and looked sumptuous at first, but either pilled rapidly or pulled out of shape before the season was out.

But Faloni’s crewneck feels substantial, with a firm but lofty hand that brings fresh meringue to mind. I found that the sweater was slightly sheer, which shouldn’t have been a surprise considering its light color and fine weave; it just meant that I won’t be wearing a pink shirt underneath.

Fit-wise, I selected a large, in keeping with my U.S. 40 jacket size. The sweater is fitted where it counts most, the banded bottom and armholes, but leaves enough room in the chest and waist to appear comfortably relaxed.

Lengthwise, the sleeves are generous enough to allow for a rollback cuff—a crucial detail that’s lacking from too many modern makes. The hem of the sweater falls below my hips, which felt a bit excessive until I realized the utility it created. Thanks to its longer length and fine weave, Faloni’s sweater can be comfortably tucked into a pair of tailored trousers—a move I’ve admired in lookbooks but have never been able to pull off with my more substantial knits.

So, it’s ironic that one of my preferred ways to wear the sweater doesn’t involve trousers at all: I’ve taken to wearing it beneath a flannel robe on particularly frosty Boston mornings. I wouldn’t dream of wearing any of my other sweaters against bare skin, but Luca Faloni’s cloud-like texture gives it a pass.

A full season of wear will be required to gauge how resilient the soft cashmere proves. But after a few months, it is showing fewer signs of wear than sweaters that have exceeded its relatively modest $320 price—and that’s a fine start.