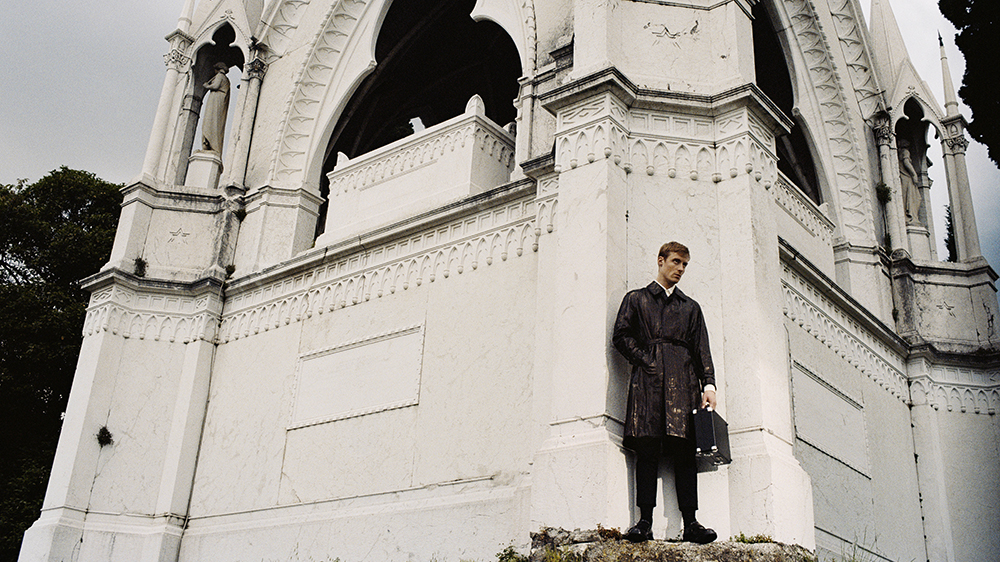 Fashion’s rat race has prompted brands to weave terms like ‘handmade’ and ‘heritage’ throughout their narratives. But more often than not those words fail to accurately describe what these brands sell; often, they’re used to charge increasingly high prices for increasingly subpar products––and the gloss of authenticity does a lot to move SKUs.

But recently, a young brand called James Vincent has emerged and proved itself to be a rare exception to this unofficial rule. It is on a mission to enlist Italy’s greatest craftspeople to fabricate designs more genuinely luxe than most things you’d see on a runway or in a fine boutique.

The proof is in the pudding. Try picking up one of their leather jackets. They’re so heavy that one might wonder whether they’re bulletproof. (The official answer is no, but the stiffness of the hides this company uses might make you ask the question again.) Contrast that with the weightless cocooning of a double-breasted overcoat cut from a proprietary baby alpaca fabric that can only be sourced from one mill. Or consider the suiting tailored from and lined in 100 percent silk. Feeling that kind of excellence incites many thoughts, but one rings out more clearly than any other: They just don’t make clothes like this anymore.

Founded in 2017, the under-the-radar brand isn’t a niche arm of a luxury conglomerate, nor is it run by fashion industry veterans. Its owners Zachary Johnson, 30, and Maria Valerio, 26, now partners in every sense, met by chance when Johnson made an impromptu trip to Milan in the summer of 2016, sparked by a desire to make clothes. “He came and never really left,” Valerio told Robb Report.

While Johnson has no formal training as a designer, “The interest has always been there,” he said. Luckily, Valerio grew up with an aunt who shares both her first and last names, and who’s “been sewing her whole life.” Valerio remembers visiting clients with her aunt, playing with leftover buttons and pinning whatever fabric happened to be laying around on a dress form. From there, she studied styling at Milan’s famed Instituto Maragoni, and briefly worked with an interior design firm before coming back to clothes.

The duo quickly realized they were on the same page about the kinds of clothes they wanted to make—and Johnson admitted that his naivete made him bold enough to give their new venture a shot, even if finding the professionals and businesses who could execute at their very high standards would be a challenge.

They found that the number of these makers in business has contracted in recent years as more and more companies become satisfied with cheaper work. Plus, Valerio noted, many of the bigger brands in the country are quick to snap up the talent that remains, something which often prevents them from working on outside contracts. In spite of the structural roadblocks, they are slowly building a network of like-minded people helping them make their ideas a physical reality. (“We just started working with this woman who used to do a lot of Gaultier’s leather jackets in the ’90s,” Johnson said enthusiastically.)

A finely-knit cashmere-silk sweater and tailored pants with a leather belt, left, and a baby alpaca overcoat with abalone shell buttons, right.  Courtesy of James Vincent

All of them are instrumental in realizing the concept of James Vincent, which Johnson described as, “the whole idea of what luxury menswear should be. A big aspect of what we do is to build a wardrobe asking the question, ‘What material do you want your body to be wrapped in?’ It starts with the material for us.”

But working with such a focus isn’t cheap. That means, for now, the brand doesn’t have a retail presence. Everything produced is essentially made to order (interested parties can contact Johnson through the James Vincent website). For some products in particular, there’s simply no other way. As an example, Valerio pointed to a pair of ostrich nubuck cowboy boots––the skins for which require a full five weeks of hand treatments before they’re even sent to a shoemaker.

What’s both fascinating and infuriating is that James Vincent products are not radically pricier than those from famous international houses quick to extoll their artisanship. But the results rarely compare. True, their pieces are expensive: a double-breasted, vegetable-tanned Vachetta leather trench coat lined in 100 percent silk satin will set you back €11,000, just shy of $12,000 at current exchange. But you’d struggle to find a better one. The same could be said of a double-breasted, silk-lined silk herringbone jacket priced at €7,300 (about $8,000). Cutting corners just isn’t in the James Vincent playbook.

While it’s hard to express these qualities on Instagram, where mediocrity jazzed up with smart branding can pass for excellence, James Vincent is finding an audience. (Travis Scott is one of the young stars who’s been spotted in the brand on the red carpet.) These are clothes and accessories that seduce you, and in a rampantly disposable world, the sensuality in the seams are helping turn them into heirlooms in the making. And the making is really where the heart of the brand lies because it’s a communal effort.

“The people we work with are so amazing,” Johnson said. “Our job is to do the research to find the people to make the shoes, the jackets, the belts and then continue the traditions that are dying.”