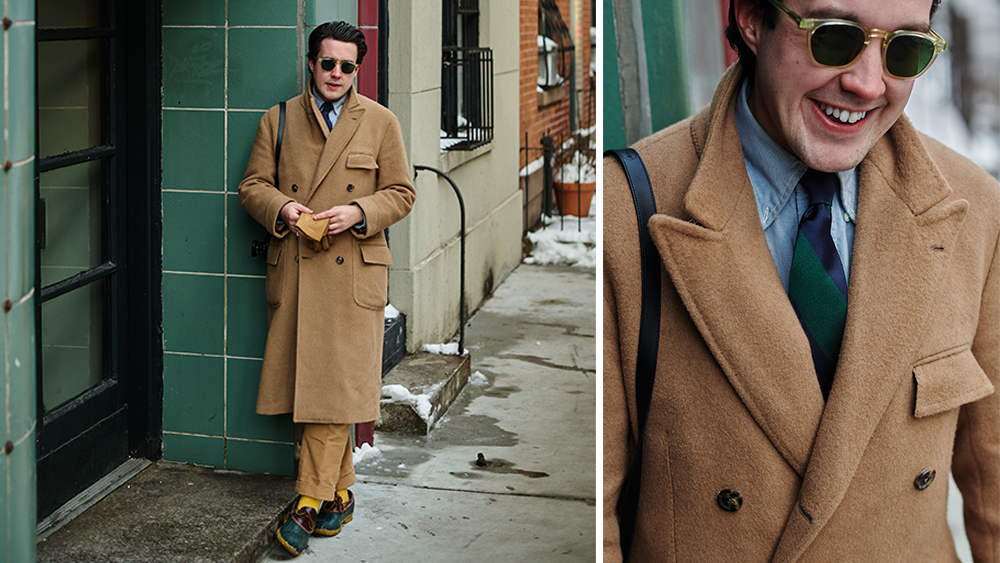 Until recently, perhaps no item in the menswear canon felt more geezer-ish than the polo coat. At a time when coats were cut slim and cropped, the polo—whose generous proportions stemmed from its original utility as a warming cloak worn by English polo players between matches—looked downright archaic.

It didn’t help that the coat traveled from polo pitches to Ivy League campuses, where the mix of formal and informal features—including camel hair fabric, a double-breasted front, peak lapels, flapped patch pockets, a half-belted back and gauntlet cuffs—which had made it such a hit at the 1930 Harvard-Yale game were essentially frozen in place. Consequently, the few outlets that continued selling the style into the 21st century were classic haberdashers like J. Press, O’Connell’s and Ben Silver. (Ralph Lauren, which has stocked its own signature version almost every season, stands as a notable exception).

So, when fashion’s pendulum began swinging back in favor of looser fits, longer lengths and dramatic drape, the polo coat was perfectly positioned to seize the moment. Consequently, the style was picked up by younger labels unafraid of tweaking the classic formula. Drake’s debuted its take this past fall, which was marked by an Ulster collar and a curved flap pocket at the breast. And on the other side of the planet, The Anthology introduced versions cut from both camel hair and Donegal tweed.

At the same time, those labels who’d kept the polo coat alive during its leaner years began experimenting with its form. Ralph Lauren injected a Western vibe by crafting it in shearling. And while J. Press continues to sell its classic make, the label’s collaboration with Todd Snyder saw it updated as the “spectator coat” with a more dramatically shaped lapel.

This new pax polo coat has touched New York’s tailoring houses, which have crafted decidedly luxurious models of their own. This past season, 18th Amendment rolled out a made-to-order polo overcoat tailored from pure camel hair sourced from France’s Dormeuil mill and named after the famed gangster Lucky Luciano. In the mind of 18th Amendment creative director Angel Ramos, the coat’s appeal is rooted in nostalgia yet relevant to the present moment.

“I believe many sartorial enthusiasts are in love with wearing garments that were created before their time,” Ramos tells Robb Report. “This style of coat is a chic piece that, in my opinion, is brilliantly hybrid and can be worn formal or dressed down.”

It’s an ethos Ramos has put in practice: “I wear it with a classic navy suit, I’ll dress it down slightly with a pair of odd trousers and sports jacket, or on Saturday mornings I’ll run out the house to take my kids to soccer wearing sweats, a crewneck sweater, a baseball hat and my beloved Lucky.”

Instead, the made-to-order coat produced from Joshua Ellis camel hair features double-stitched seams that are done by hand but resemble that traditional machine-stitching from afar ($3,950, available by inquiry). “We chose to keep a lot of the design elements: the envelope pockets, the flap pocket at the breast and certainly the proportions in the length and the shape. We wanted to bring in what we do, which is handcrafted clothing,” Mueser says.

While its modern-day iterations may differ, one thing is clear: the polo coat is back on top.