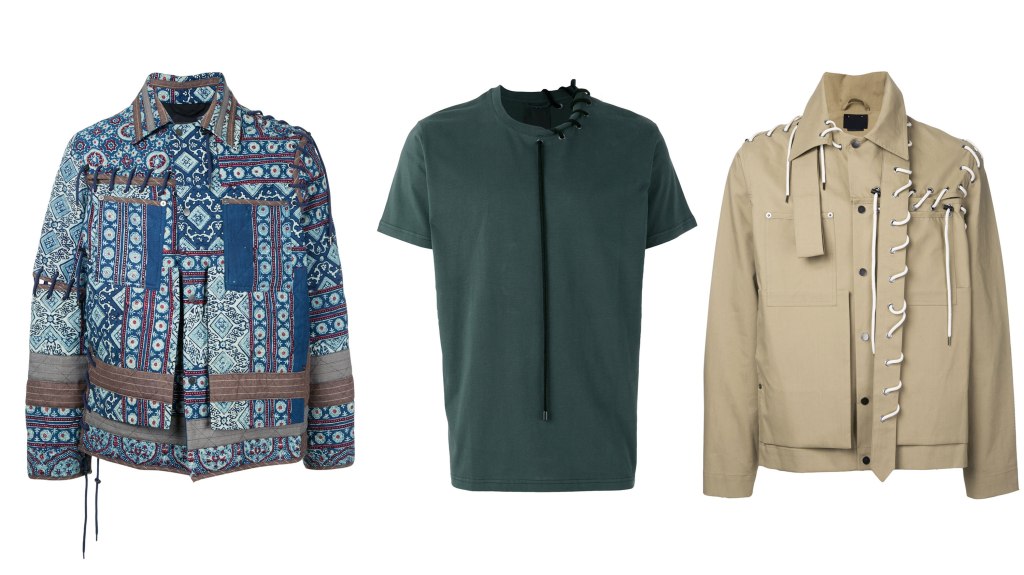 The edgy, often provocative looks that have come to define streetwear are getting a dose of luxury, as high-end menswear labels—both established and new—are taking the reins of the movement. With its nod to global influences and ability to capture the spirit of sportswear, the high-low fashions of luxury streetwear are in the midst of a reawakening. The following four menswear labels are setting the bar—and should be in your closet.

Cédric Charlier is well versed in luxury—having worked for fashion houses like Céline and Lanvin—but when he launched his own womenswear label in 2012, his signature style of high-end yet laidback fashion came out to play. With a knack for nailing comfortable elegance and a loyal international following, the Belgian designer showed his highly anticipated menswear line in January of this year, offering easily layered garments that boast architectural lines and color-blocking details. Stand out pieces from the collection, which will hit stores in early fall, are a graphic dress shirt—styled here over a knit sweater—and a rich navy cable-knit sweater, which Charlier punched-up with a checkered hooded shirt and leather pants (prices available upon request).

When Joe Casely-Hayford—the celebrated British designer and creative director of Gieves & Hawkes—and his then 22-year-old son Charlie launched their eponymous brand Casely-Hayford in 2009, they did so with the intent of bringing the dynamic menswear scene of London to the global market. Today, with stores throughout the U.S., Japan, Italy, France, China, and Russia, the exclusive label continues to merge impeccable tailoring with sportswear to create handsomely edgy garments. Among the line’s notable offerings are custom denim jeans (from about $290), made-to-measure knitwear (from about $420), and other wardrobe staples like the Lambton bomber (about $635), Crane graphic cotton t-shirt (about $200), and Caius cotton-blend blazer (about $765).

Another designer marrying athletic and sartorial styles is Tim Coppens, whose knack for mixing classic patterns with bold-hued solids makes for daring menswear designs. The Belgian-born, NYC-based creative aims to evoke the energy of the urban setting through such designs as his shearling motocross coat ($2,780), acid-washed cotton hoodie ($340), lux joggers ($335), and motocross crewneck (price upon request). To complete his runway looks, Coppens pairs the ensembles with sneakers from Under Armour Sportswear, the upscale streetwear-focused line from the sportswear giant, which the designer also helms.

Taking a more daring approach to luxury streetwear is Craig Green, a British designer who has garnered recognition in the high-fashion realm for his expert ability to walk the line between the eccentric and sensible. Green’s contemporary-meets-utilitarian aesthetic is consistent throughout his five-year-old eponymous label’s bold offerings, from the tile-print wool-cotton jacket ($2,408) to the lace-detail jacket ($2,255) and t-shirt ($197). Though technically menswear, the designer’s garments are meant to be gender-neutral, making them all the more forward-thinking.