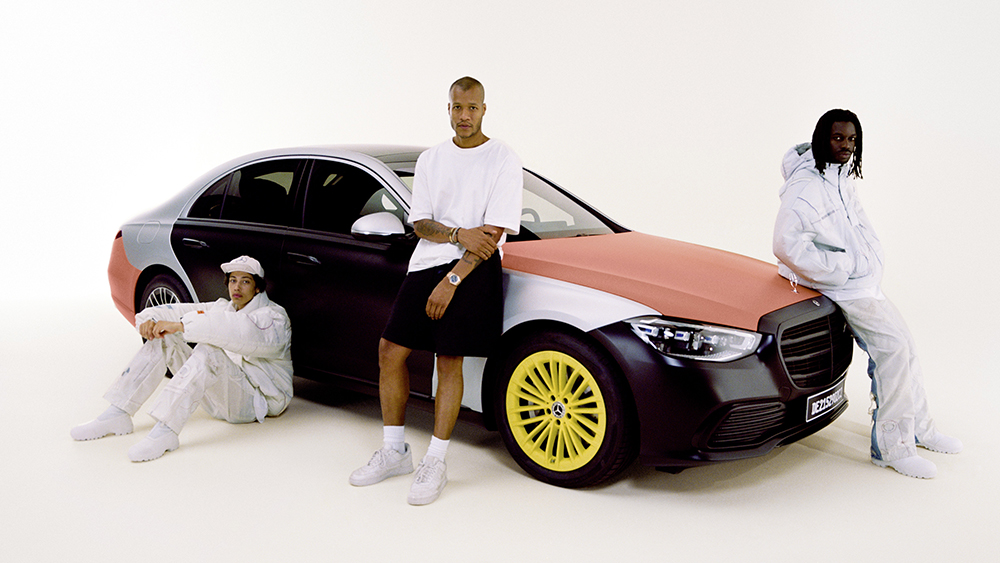 On Tuesday, Mercedes-Benz and designer Heron Preston unveiled a collaborative concept collection made from upcycled airbags—and, true to form, they can inflate. Preston used the airbag material to create three unique men’s and women’s looks, as well as merchandise that will be given away through the streetwear reseller GOAT starting September 10.

One of the campaign images featuring both men’s and womenswear looks from the concept collection.  Thibaut Grevet/Mercedes-Benz

“The airbag concept collection is inspired by two anniversaries of the life-saving technical innovation: the airbag patent 50 years ago and the first serial introduction into our flagship model, the S-Class back in 1981,” said Bettina Fetzer, Mercedes-Benz AG’s vice president of communications and marketing. “We are convinced that co-creation and collaborative projects create memorable and unique moments with our brand.”

Both the automaker and the designer share a commitment to sustainability. Recognized for his luxurious take on workwear, Preston has made a point of minimizing his use of destructive production methods since he launched his brand in 2016. In 2018, he launched his Re-Design program, which creates one-of-a-kind pieces from reclaimed materials—and this collaboration was produced under that umbrella.

An inflated look from the collaborative campaign.  Thibaut Grevet/Mercedes-Benz

“Upcycling and celebrating sustainability have been my earliest approaches to design, since launching my collection, and I loved lensing a celebration of the airbag’s anniversary in this way to create a beautiful collection from recovered materials alongside some of their most advanced fleet of fuel-efficient and electric vehicles,” he explains. Photographer and filmmaker Thibaut Grevet brought the duo’s vision to life in a series of bold images and bespoke films. The carmaker’s new S-Class and a cutaway model of the S-Class Plug-in-Hybrid are seen throughout the campaign. The 500 SEL (W126) and new all-electric EQS models are also making appearances.

If you’d like to see the shoot’s inflatable set for yourself, Mercedes-Benz is planning to transform it into an installation that will appear at Mercedes-Benz Fashion Week in Berlin from September 6 to 8.