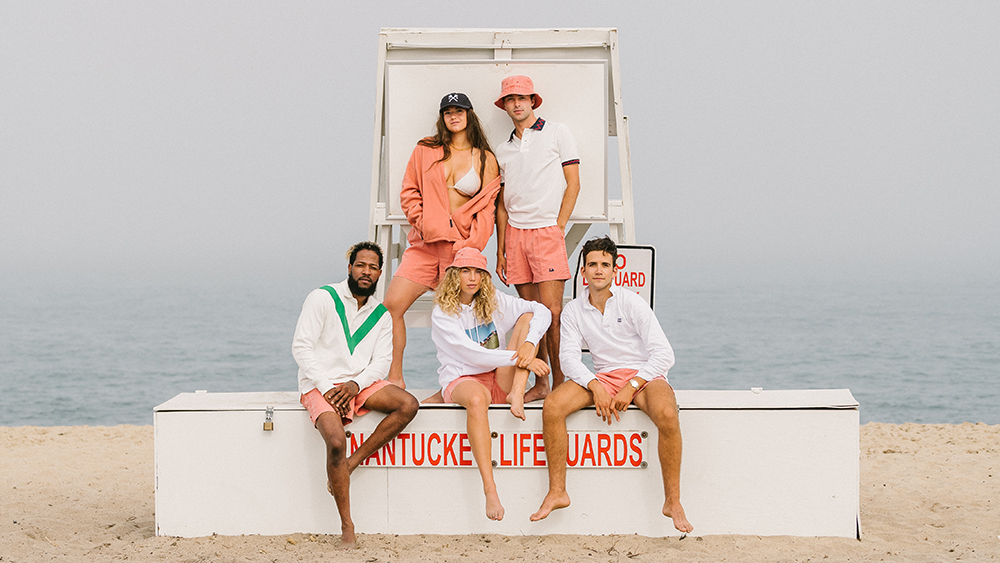 Nantucket may be called “The Grey Lady,” but the fog-prone island’s most famous export is a very particular shade of coral. And for over half a century, Murray’s Toggery Shop has been responsible for painting towns throughout the Eastern seaboard and beyond in Nantucket Red.

The fourth-generation family owned business got its start in 1945, when Phillip Murray Jr. purchased an existing business, The Toggery, on Nantucket’s Main Street. But its signature product emerged some 15 years later, when the founder’s son Phillip C. Murray introduced a cotton canvas pant in a faded, dusky red.

According to Murray’s Toggery Shop general manager Connor Soverino, the distinctive pant was named at a 1962 party held on Nantucket for the New York Yacht Club, where the yet-unnamed garment was already in fashion.

“One of the head members of the Yacht Club said they should refer to the pants as Hulbert Avenue Reds,” Soverino says, referring to the island throughway where the bash took place. “Phillip Murray, who was the second-generation owner, thought about it and came to the conclusion that they should be called Nantucket Reds, and the rest is history.”

Despite the local name, the pants were inspired by the boats Murray had seen sailing off the coast of Brittany. Their canvas sails, initially a bright red, were washed by weather to a faint shade of pink. The Gallic point of reference yielded an all-American best-seller: By 1980, Nantucket Reds were trademarked and canonized in Lisa Birnbach’s Official Preppy Handbook.

Today, Murray’s proffers dozens of styles in the fabric, from the pant that started it all to unconstructed sport jackets and even yarmulkes (Soverino cites the brand’s workshirt as his personal favorite). Through the decades, they’ve remained faithful to the pigment-dying process that gives the heavyweight fabric its guaranteed-to-fade charm, which has lately inspired collaborations with both the old guard and cutting-edge of American prep.

Accounting for the former is venerable Ivy League outfitter J. Press, which launched a capsule collection with Murray’s this spring. The resulting merchandise was stocked by both businesses, giving J. Press an island foothold in the process. “We don’t have a store in Nantucket, and we feel that’s where a lot of our customers might go in the summer or on the weekend,” J. Press Merchandising Director Robert Squillaro tells Robb Report.

In addition to ballcaps, American-made pants and shorts, the collection saw J. Press signatures accented by the unmistakable hue: flap-pocket oxford sports shirts with Nantucket Red stitching at the back collar buttonhole, and a made-to-order hopsack wool blazer that smuggles Nantucket Red under the lining of its collar and the piping of an inside pocket.

While the offerings—many of which sold out quickly—were diverse, Squillaro says they were organized around a single principle: “If you’re in Nantucket, or even Manhattan on a summer night, and you wanted to pair something with Murray’s Nantucket Reds, what would you wear?”

J. Press has attempted its own “brick red” imitation in decades past, but this is the first time the label has carried the authentic item. Having proven to be a match made in Ivy style heaven, the partnership is set to continue through the next year—Squillaro hints that we will see Nantucket Red manifest across other signature J. Press items this coming fall and winter.

Though considerably more junior than J. Press, Rowing Blazers has been introducing summer collaborations with Murray’s since 2018, with the most recent batch landing earlier this month. Founder Jack Carlson, who spent his teenage years in Massachusetts, fondly recalls making the pilgrimage to seaside shop: “I remember the very first time I went to Murray’s, and I went into the ‘Red’s Room’ in the back. It was like going to some sort of prep Mecca.”

Now Carlson, whose prep-rooted brand is infused with a healthy dose of street style, is bringing a new audience into the “Red’s Room” with him. “There are probably people in that audience that know about it but have never had the chance to go there in person, and I think that is part of the fun,” he says.

While past collaborations have seen Rowing Blazers apply the fabric to tees and banker bags, Carlson says the current crop is pulled mostly from Murray’s considerable archives, including pique polos, fleece vests and his personal favorite, canvas gym shorts, which he enjoys wearing with a vintage Stüssy tee. “I wanted to do some of the iconic, historic pieces and style them our own way,” he says.

Rowing Blazers has also found a home-away-from-home at Murray’s. The shop, which was an early third-party retailer for the brand, now features an entire Rowing Blazers store-in-store. And as the 76-year-old business continues to collaborate with American labels old and new, it might one day become just as well-known as its trademark item.

“I think Murray’s is a little bit of an unsung icon when it comes to American style,” Carlson says. “Everybody knows Brooks Brothers, there are deeper cuts like J. Press, but it’s one cut deeper. It’s just as meaningful to the American menswear canon as any of those other names. It literally invented its own fabric and color. Now, how many brands can say that?”