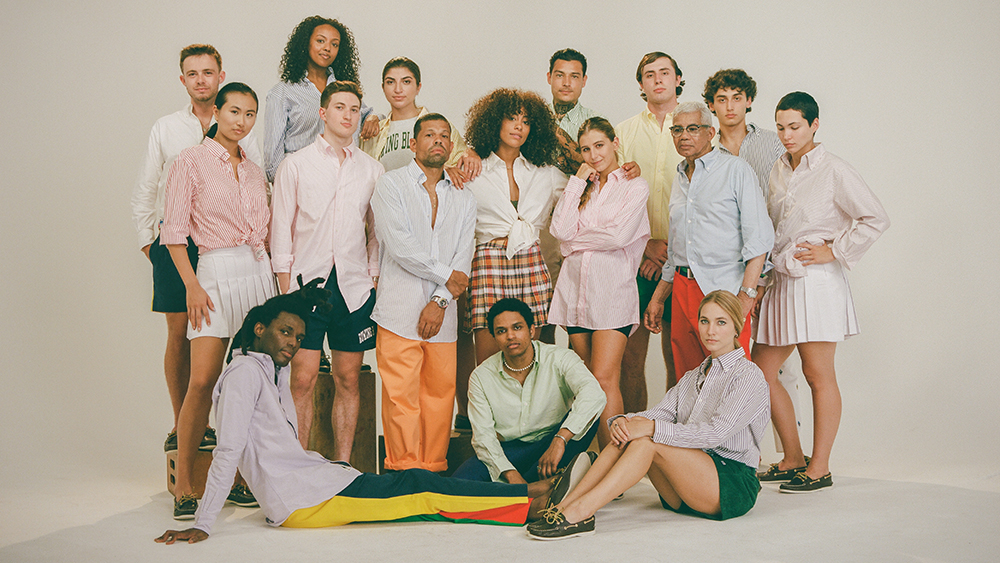 There may be no acronym more studied—or scrutinized—in menswear than “OCBD.” Shorthand for “oxford cloth button-down,” it refers to the casual sports shirt that was first introduced by Brooks Brothers at the turn of the last century and has spawned countless imitations since.

According to legend, the shirt was born after Brooks Brothers president John Brooks witnessed a polo match in England and noticed that the long collar points on the players’ shirts were fastened to the body to stop them from flapping in the wind. Brooks had his tailors copy the shirt and began selling them stateside in 1900.

But it wasn’t just the buttoning point that distinguished the shirt: the collar was unlined and soft, a stark departure from the stiff, detachable collars that ruled the day. And the generously cut shirt was made from oxford cloth, a beefy basketweave that was less fine and more durable than other cotton fabrics.

In short, the OCBD was a thoroughly American original. Its casual nonchalance made it a popular choice among Ivy League students, and campus shops were soon designing and selling their own versions: J. Press OCBDs were distinguished by their iconic flap pocket, while Gant introduced the locker loop and back collar button. The shirt also found favor among jazz musicians, with Miles Davis famously wearing an emerald green OCBD on the cover of his 1958 album Milestones.

But by the close of the 20th century, the shirt’s progenitor seemed to have lost the thread. Following its acquisition by Marks & Spencer in 1988, Brooks Brothers gradually tweaked its most famous offering, introducing non-iron fabrics, slimmer fits and a lined and fused collar. Among the shirt’s loyalists, outrage ensued.

In response, a small cottage industry grew up around recreating the soft, unlined and unfused Brooks Brothers OCBDs of old. Among the first was Mercer & Sons, which was established in 1982 and cuts its shirts in the style of Brooks Brothers’ Traditional Fit. The quest continues today with younger brands like Junior’s, which introduced an unlined made-to-order OCBD in August, and Wythe, whose OCBD is modeled after Brooks Brothers shirts from the ‘50s and ‘60s and washed multiple times for a lived-in feel.

“I love the longer unlined collars, the slubs and texture of the fabrics, and the general effortlessness with which they seem to be worn,” says Wythe founder Peter Middleton of his shirt’s inspiration. “All the examples I found over the years are so well-loved, and I wanted to make shirts that would feel similarly loved and worn.”

In August, Rowing Blazers launched a made-to-order shirt program with 11 oxford fabrics and just one collar option—an unlined button-down that founder Jack Carlson says is “inspired by vintage Brooks Brothers, way back. Back when they were American-made, and the collars were the right shape.”

Though its MTO shirts are made domestically, Rowing Blazers has bucked OCBD convention by adding Anglo features including sleeker side pleats in place of the traditional box pleat. “It’s less orthodox American old-school, but more flattering in my opinion,” Carlson continues. “It’s also what Prince William would wear, so you can’t go wrong.”

Traditional OCBD makers exist across the pond too, most notably Drake’s and newcomer Jake’s. The latter was founded amid 2020’s lockdown doldrums by freelance trouser maker Jake Wigham, who prefers a fuller, traditional cut, which he says is “completely essential for what I would call a proper button-down.” Wigham draws inspiration from a number of classic American brands including Gant, Brooks Brothers and Troy Guild Shirtmakers, as well as period documents.

“I wanted to create a shirt that was as true to the classics as possible,” Wigham tells Robb Report. “Authenticity is key, so I take a lot of inspiration from archival imagery of campus yearbooks and jazz musicians of the golden era.”

In 2016, Brooks Brothers re-introduced its OCBD—dubbed the Original Polo Button-Down Oxford—as a domestically made model with a soft, unlined and unfused collar. However, the company’s 2020 bankruptcy forced the closure of its North Carolina shirt factory, cutting the shirt’s second coming short.

But at the end of September, Brooks Brothers re-introduced the Original Polo Button-Down Oxford Shirt for a third time under the guidance of Michael Bastian, the brand’s recently appointed creative director. To design this latest iteration, Bastian pored over the company archives to see what features of the shirt remained consistent from the 1930s through the 1980s, before the company’s first acquisition.

To that end, the new OCBD features an unfused, unlined collar and cuffs, as well as a seven-button front, a straight box pleat, and six-pleat shirring at the cuffs. Perhaps most radically, Bastian has dispensed with the company’s many fits in favor of a single, generous cut that harkens back to the roomy original.

Brooks Brothers’ “new” OCBD harkens back to the OG in solids, stripes and patch-worked “fun shirt” variations (from $89.50).  Brooks Brothers

While those fits will still remain in the brand’s dress shirt offering, the singular OCBD has been further streamlined by ditching collar-arm sizing for XS-XXL. However, Bastian reveals that customers will soon be able to order them in exact neck and sleeve sizes through a forthcoming domestic made-to-order program.

For now, traditionalists will be relieved to find a Brooks Brothers OCBD that’s more like it once was—or at least as they might remember it. As Bastian says, “It’s this shirt that people think never changes, when it’s actually always changing in tiny little ways.” Perhaps that’s the key to the enduring appeal of this most nostalgic of styles: The more the OCBD changes, the more it stays the same.