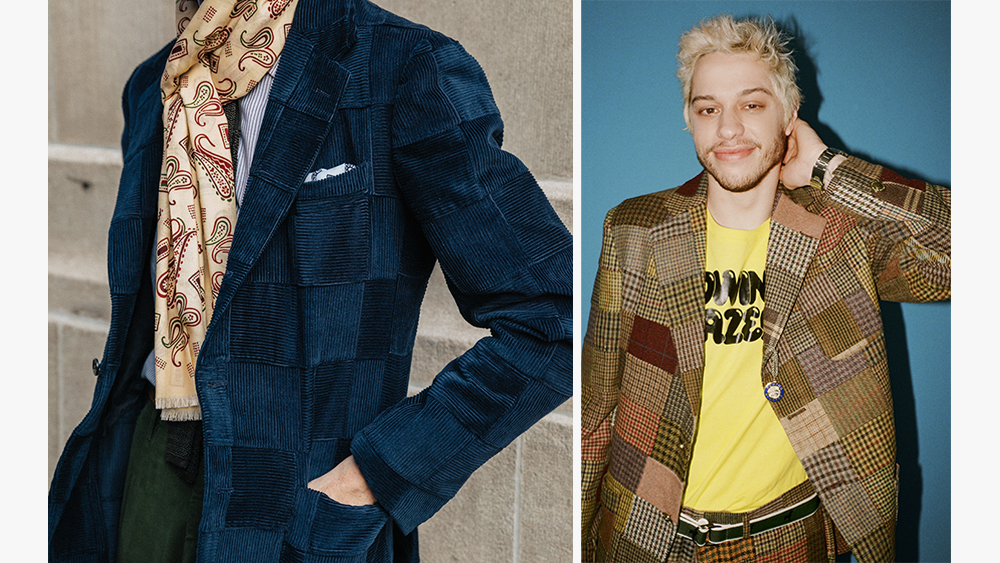 Sport coats, we’re told, are the staid garments of yesteryear, artifacts of a stuffier era that are being replaced by safari jackets and chore coats at a rapid clip. But this argument fails to reckon with one of the loudest, most maximalist, and all-around groovy items in the male wardrobe: the patchwork sport coat.

As the name suggests, the style is not tailored from uniform cloth, but spliced together by a literal patchwork of varying squares. Patchwork sport coats were originally made from leftover fabric scraps, and one of the style’s originators, The Andover Shop, continues to offer patchwork trousers and vests made by its in-house tailor. There is perhaps no greater patchwork proselytizer than Ralph Lauren, who scaled up from scraps to reliably mass-produce tweed and madras iterations with each season. And prep’s most modern incarnation, Rowing Blazers, offers a patchwork tweed jacket through its made-to-order service.

For all that Ivy style cachet, it’s tempting to think of the patchwork sport coat as something from the golden years of the natural shoulder look. But according to Sean Crowley of Crowley Vintage, they were a reaction to changing times.

“They’re part of a thing that really happens in the 1970s. I always say, it’s like Ivy drops acid,” Crowley tells Robb Report. “A lot of traditional makers looked at how the tide was turning in terms of men’s style, and thought ‘How do we put a ‘70s spin on our traditional, natural shoulder jackets?’ And that’s where you get patchwork jackets.” Crowley notes that a few of the patchwork specimens stocked in his Brooklyn showroom hail from the 1960s, but that the vast majority come from the ‘70s onward. “It was a little blip, but in the ‘70s it kind of blew up,” he says, adding that he sees about 20 summer-weight patchwork jackets for every patchwork tweed.

As for their appeal, Crowley rejects the “go to hell” label typically applied to Ivy’s loudest outfits, and instead sees them rooted in the very Yankee tradition of the “crazy quilt.” As he says, it has a distinctly American irreverence: “It’s a little twist, a bit of novelty, a bit of fun, the idea of making a high, refined thing out of a seemingly folksy, lowly thing.”

A modern approach to patchwork comes from J. Mueser, which introduced its Italian-made Campania jacket in a brown or navy tonal patchwork corduroy this past fall. In addition to their comparatively subtle coloring, the jackets feature typically Neapolitan details like a lighter construction and rounded patch pockets.

“We found these tonal patchworks, and it was kind of the perfect marriage…classic patchwork Ivy style, but it’s not so preppy,” says founder Jake Mueser. “From a distance, you don’t know what’s going on with that jacket, then you look at it and think, ‘Oh, I get it.’”

The patchwork corduroy jackets have largely sold out but remain available on a made-to-order basis. And this spring, Mueser plans to release a similar patchwork jacket cut from green or navy tonal seersucker.

“I’m not worried about trying to pretend that it’s the ‘60s and that I’m at Princeton. I like taking some of those ideas and running it through a different perspective,” he says. Much like when it was first conceived, times are changing. But this go-round, the patchwork sport coat is changing with them.