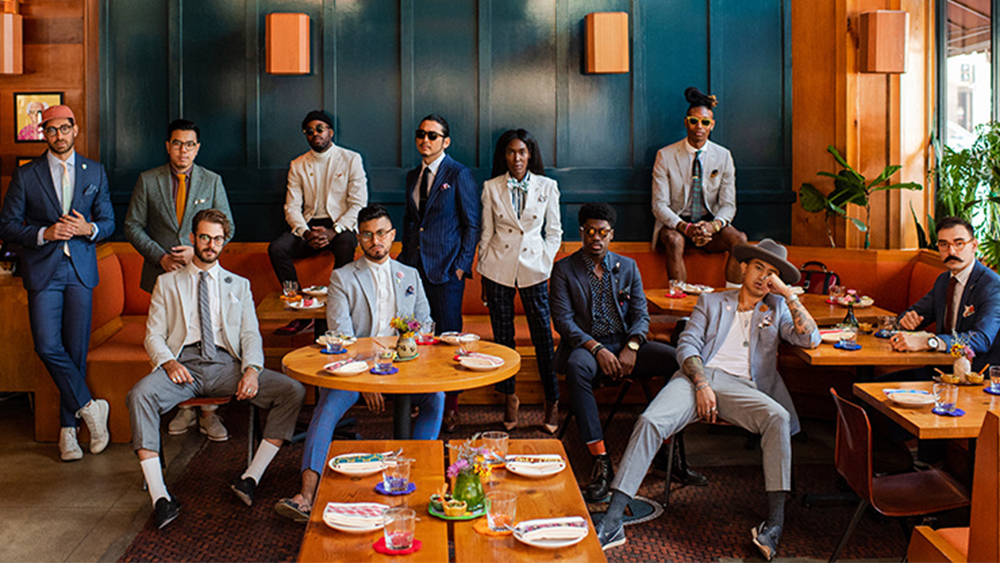 Celebrating their 10th year in business together, Andrew Cheung and Rodolfo Ramirez, founders of Pocket Square Clothing in downtown Los Angeles, are doing bespoke menswear on their own terms. In addition to their selection of over 2,000 fabrics, hundreds of buttons and a wide variety of stitch choices for their one-of-a-kind clothing, they also frequently incorporate textiles that are culturally or emotionally relevant to the client: fabrics from trips abroad, Indonesian batiks and even custom-printed fabrics of meaningful artwork have all been used in their designs. Ramirez says it’s a way to infuse a story in a garment—a touch that’s highly representative of their brand.

The entrepreneurs, who met freshman year as roommates at the nearby University of Southern California, shared a love of fashion and a subscription to an otherwise unaffordable men’s style magazine. It was on a study abroad program throughout Asia that Ramirez had some custom clothing made—or at least, it was supposed to be custom.

Recalling his conversation with the tailors, he says: “It was an experience that was very much prescriptive. ‘This is what menswear should be, these are the patterns you should pick and do not deviate from them!’ And my question was: ‘Why?’ Not to mention, I was paying for it!”

Upon his return to the States, he and Cheung, who would eventually go on to write his senior thesis about the company, decided to start a clothing line that went against those prescriptive ideas about menswear. Although neither had any experience making clothing, they enlisted the help of their seamstress moms and eventually learned how to sew themselves. Initially focusing on men’s accessories, the two did everything from making the clothing to building the website.

Realizing they would likely not be able to keep the ship afloat that way, they commissioned a 50-year-old LA apparel manufacturer to help fulfill orders. Eight years later, the two received a call that they better come collect their fabrics—after a half century in business, the factory was closing. It was a conversation with the company’s workers that prompted Pocket Square to make a big decision: “Most of them have been working here for over 20 years,” Ramirez notes. Determined not to let the employees down, the two scraped together what they could and bought the entire business.

In 2019, Ramirez reports, business was booming, with the company recording their best year since opening. Sadly, it’s not hard to guess where this pre-pandemic story is going. “It was great,” he says, “And then everything got cancelled.”

Thankfully, the mayor’s office had just started LA Protects, an initiative to get area manufacturers to make masks for the masses. While many manufacturers were closed and had trouble getting supplies, Pocket Square found that buying a factory that had been around for a while had its advantages: “I basically bought 50 years worth of stuff,” Ramirez laughs. “I had elastic that I found in corners!” After getting permission to re-open, they called everyone back in and eventually had to hire 15 additional sewers to keep up with the demand for masks.

Now back to regular business, Pocket Square is again welcoming customers to its downtown showroom (while continuing online consultations and accessories sales) and preparing for the launch of its new leisurewear line, Hgher. Catering to what the two call the “urban gentleman,” their goal is to help each individual develop their own style through the clothing. Although Ramirez says he wants to educate customers about what makes custom clothing so extraordinary, “I’m not here to dictate how you should dress, but I’m here to facilitate your growth.”

His advice for newcomers to the world of bespoke suiting has more to do with attitude than attire: “I find that the best garments that we ever produce are when someone comes in very open minded.”

Watching a customer’s sartorial evolution, he says, is one of the best parts of the job: “It’s always fun to see the transition from the first suit to the 10th suit that our client gets…how they begin to say, ‘What else do you have that I haven’t seen?’ Those things are very interesting to me–I think that’s what kind of sets us apart. We’re storytellers.”