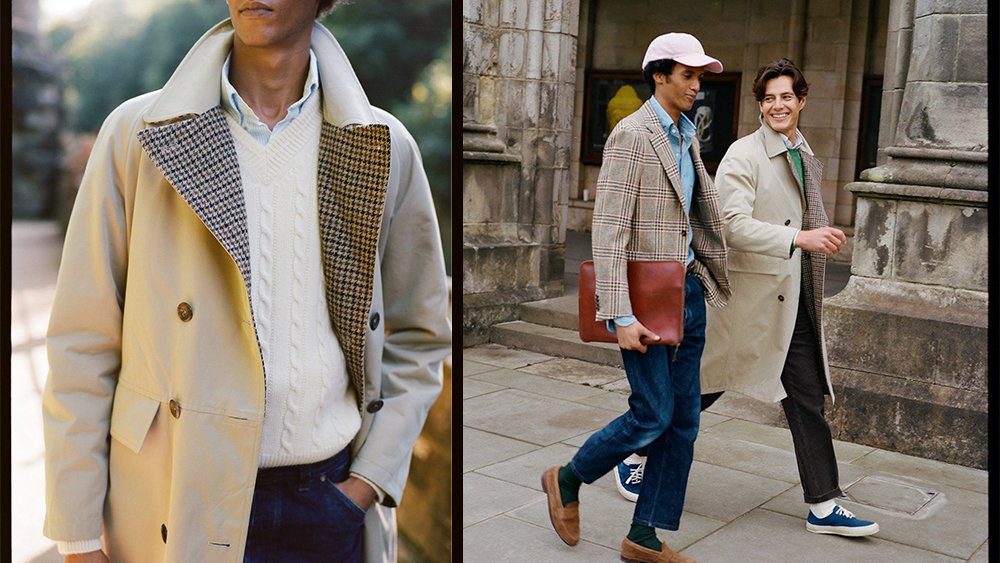 Reversible clothing often feels like a gimmick—but what do you call a gimmick that’s remained relevant for 100 years? That’s the unusual case of the reversible balmacaan coat, which has been produced in different forms by different labels over the last century but remains strikingly consistent in its make: one side is cut from water-resistant cotton, while the other is a hearty tweed. The result is a hybrid coat that protects from rain but can serve as winter outerwear.

Given its practical nature and two-in-one utility, it’s no surprise that the piece became an Ivy style staple, though we have J. Press to thank for its stateside popularization. According to Richard Press, grandson of J. Press founder Jacobi Press, the style was added to the shop’s assortment shortly after WWI as a way of upping the competition with fellow campus outfitter Brooks Brothers. The reversible balmacaan, which was originally made for J. Press by Burberry, soon became a best-seller at the haberdasher’s collegiate and city locations.

After WWII, J. Press switched from Burberry to another English manufacturer to produce the coat, which most often featured a black-and-white herringbone for its tweed side, as well as the occasional glen plaid. Press recalls it being an outerwear best-seller into the 1980s, perhaps aided by the free publicity of 1970’s Love Story, which cloaked star Ryan O’Neal in the reversible coat and other J. Press items.

However, the coat was dropped from the J. Press rotation sometime after Press left the company in 1991; it remained MIA until current merchandising director Robert Squillaro joined the company in 2017 with a personal mandate to restore it.

“There were always items that I considered signature J. Press pieces,” Squillaro tells Robb Report. “Obviously the Shaggy Dog, the Magee ‘Donegal Mist’ barleycorn sportcoat, but also the reversible coat, always in the black and white herringbone with the tan cotton on the other side.”

The reversible coat was soon revived as a dual-labeled piece produced for J. Press by English outerwear maker Chrysalis, with water-resistant cotton twill on one side and English tweed on the other. According to Squillaro, it reclaimed its status as a best-seller immediately, and won’t be going away anytime soon. “It’s a staple, and for as long as I have input in the merchandising, it will be something we carry every season,” he says.

However, J. Press isn’t the only outlet providing reversible balmacaan coats: Brooks Brothers has featured its own version of the style over the years and continues to do so, while Ralph Lauren has dabbled in reinterpretations that have included cotton on one side and a silk-linen-and-wool-blend herringbone on the other. But perhaps no label has pushed the envelope further than Drake’s, which earlier this season debuted a double-breasted raglan mac that sports a Yorkshire shepherd’s check tweed on one side and water-resistant Italian cotton on the reverse.

As promising as the current market proves, there’s just one choice for those who wish to experience the reversible coat as it was originally designed. “I can tell you right now in complete honesty that the J. Press reversible coat that’s currently stocked is a facsimile of the one I wore as a kid at prep school in the 1950s—no difference,” Press says. If it ain’t broke…